A New Model for the Race Business?

Share All sharing options for: A New Model for the Race Business? 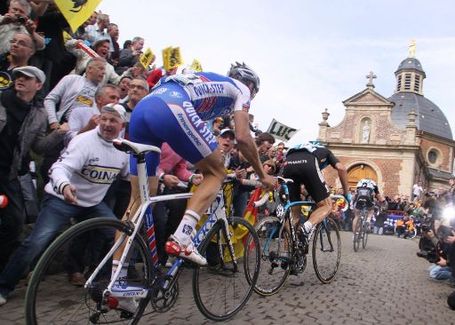 This topic is stolen outright -- like the 2006 ENECO Tour title* -- from the transfer rumor thread. Our own Broerie offered the following rumor:

The group that bought RvV and the other Flemish classics will try to make money out of cycling. They want to close down most of the hellingen, put down lots of VIP-stuff and beertents and only paying customers will get in. So no more watching for free on the Kwaremont, Koppenberg or Bosberg.

This touched off a brief discussion but I wanted to redirect it here, because this is one of those may-be-a-watershed-moment things. Can the race business stabilize itself with a model like this?

The idea appears to be to use what races have long done at the finish lines and start areas in other more interesting parts of the course. If you've gone to see big pro races in person, you've probably gathered that the finish isn't necessarily the most interesting place. Sort of like turning on baseball games in the ninth inning. Maybe you see something important and maybe you don't. Depending on the race, you might feel anywhere from highly interested to totally indifferent about the finish. Just a few examples:

So, depending on the race, the market for a VIP area out on the course exists. In fact, the concept exists: the pub at the foot of the Kappelmuur is not exactly open to non-paying guests. There are tents all along the way. Organized partying with caterers involved is already happening. So I suspect the difference here is twofold: the degree of it, and the fact that it would be the race organization putting all of them on.

There are a few risks, obviously. First, in all of the big cycling countries, people are used to watching the race for free. Part of the connection between the sport and its fans is the lack of a middleman: cycling happens in our streets, in our laps, and nobody is taking it away. Whoever attempts to turn this into some commerce has to be very careful to avoid a backlash. Tread lightly for a while, keep fees low and exclusive zones to a minimum. Make it compatible with our normal, beloved system, not competing with it. Sort of like Podium Cafe Premium. [Ahem.]

But does that work? Will people pay $5 to see something comfortably which they can already see for free? And if so, does that get the races anywhere? Or do you have to own the entire Koppenberg and let it back out again at $20 a pop to make any money? If you set up a tent and serve mussels and beer... well, can't the guys across the road do the same thing and let people in for free?

There are a couple things races can do well that can't be done as well elsewhere. They can mass-produce material, like race programs, tee shirts and other souvenirs, which they can include in your VIP package, and which you can wave at the poor non-paying guys across the street. And they can stream media: now picture a tent with a big screen TV, like they have in the press room, to go with your seat on the Koppenberg, the mussels and the frietes. Hell, stream in race radio too. And parking, or shuttle buses. Now do you have a viable product? Even without taking exclusive control of the bergs?

I dunno. I wish the race organizers well, since their finances obviously have to work for us to watch the races we love. But in the US the sporting public is becoming increasingly stratified, with premium stadium seating looking more and more like McMansions with armed guards around them. More and more you see scenes like the new Yankee Stadium, which sold the home plate area seats for the equivalent of Macedonia's GDP, and the wealthy patrons used those tickets like another toy, to be ignored when something flashier comes along, leaving the impression on TV that the stadium was half-empty. Dating back to ancient Rome and beyond, sports have always been primarily for the people, and cycling, of all sports, needs to hang on to that.