Giro di Toscana 2011 - Follow the final stage race of the season in real-time!

Share All sharing options for: Giro di Toscana 2011 - Follow the final stage race of the season in real-time!

It's a bitter-sweet moment for women's cycling - the final chance for riders to grab some glory for their teams, the final time some riders will be team-mates - and, if rumours are to be believed, the final time we'll see some teams at all (cross fingers that's all nonsense)  Yes, it's the final stage race of the 2011 European season - and we finish where (in my humble opinion) the season really starts - Italia, for the Giro di Toscana-Memorial Michela Fanini.

This is always a great season-closer - 7 stages over 6 days, with something for every kind of rider - and you can find out more about the parcours and the fun below.  The race runs a live ticker as well, so it's one that should be easier to follow!  There was a lot of video last year (including the comedy moment where the inflatable finish-line arch collapsed on the night-time ITT) - and you can see some on the ever-fabulous Cycling Fever - but here's Giorgia Bronzini, winning her second stage of last year's tour in the cobbled streets of Florence, which was followed up by her win at the Worlds...

A quick note about the woman the race is named for.  Michela Fanini was an Italian cyclist, from a family with a long connection with cycling - her grandfather was a well-known bike-builder, her grandmother was a professional cyclist and her father, Brunello Fanini, has been a race organiser and team manager.  Michela was National Road Champion in 1992 and won the Giro d'Italia in 1994.  Sadly, in October that year she died, aged just 21, after she was in a car accident on the way to training.  Her name (and spirit) lives on in the team S.C. Michela Fanini Record Rox, as well as the race, which was set up by her father in 1995 and run ever since.  You can read more about her and her family here. RIP Michela.

So, the race.  As you can guess from the name, it takes place in Tuscany, and has run on a similar course for years, and the website has great information on the parcours, including maps and elevation. Follow the links and you'll find all that!

It's a completely flat TTT, out and back on straight roads along the sea-front at beautiful Viareggio.  It's an evening race, so the riders will have plenty of time to explore the beach-front, checking out the course, or if they're Bridie O'Donnell, awarding prizes to the souvenirs on offer!  This year, HTC-Highroad have completely dominated the TTTs - can they round off the season with one more victory?  Or will another team ( the Australian National Team?) have a chance?  Personally my money's on HTC, but we'll soon see!  Here's the video from last year:

This is one for the sprinters - the stage loops through the countryside near Lucca, and despite some small climbs at the start, the last 60km are flat.  Hmmm, what race do we know that's happening next week, that is also flat?  Bronzini won this one last year too, so will we be able to use this as a Worlds predictor this year too?

This is the first stage for some real GC action - with a couple of small climbs, and then in the last 33km starting the real action - climbing up to Volterra once, then looping around to climb it again to the cobbled finish-line.  In the 2009 preview, Monty calculated it as 4.5% - in the past 4 years it's been won by Noemi Cantele twice, Tatiana Guderzo and Mara Abbott - a Classics type and 2 mountain goats - so a lot can depend on who gets there first - bring on the breakaways!  Here's what last year's finish looked like:

Unlike the past few years, this is double-stage day, starting with a short, flat RR on mostly straight roads - sprintastic! It's be fast and furious, a good warm-up for...

This is a great ITT for spectators - it's an evening race, so the last riders are under street-lights, and it runs out and back on the same road, so there's plenty to see.  It's shorter than last year, with a couple of little lumps (well, twice over the same lump) - and you may remember how last year the inflatable finish-arch collapsed, and was held up by hand as Marianne Vos crossed the line: 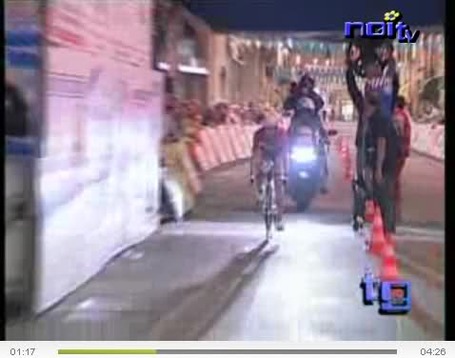 This one is often the decisive stage - a figure-of-8-ish with 4 laps that include a sharp climb of 100m on each run, and then a loop with a harder climb at Valgiano (Monty estimated it as 2k at over 10%)then 11km of descending to the finish.  It's the kind of course that looks perfect for the old suicide breakaway, and is the last chance for GC glory - and for the climby-types who will still be there, their last chance this season.

The stage starts with 4 little loops in Lucca, the home-town of Michela Fanini, then across the countryside to the beautiful (cobbled!) city of Florence. Yes, there are a couple of little climbs - the last one, in Florence is sharp on the way up, less steep on the way down, but the sprinters in the peloton can more than manage that - and the 6km on descent before the finish means it can be a spectacular stage.

The most up-to-date startlist comes courtesy of Wielerland - but it looks like it's incomplete still, so we're back to the old find-out-who's-racing-from-the-stage-1-results.  Unsurprisingly, it's headed by HTC-Highroad's Judith Arndt, who won the race in 2008 and 2010.  Their team is stacked - Evie Stevens, Amber Neben, Amanda Miller, Ally Stacher, Charlotte Becker, Chloe Hosking and Ina-Yoko Teutenberg - you can guarantee they'll be on the podiums, quite apart from the TTT!

It's a real shame the Worlds have been shunted forward by a week, because there are some big teams and riders who won't be there - no Nederland Bloeit, Hitec or AA Drink-Leontien.nl - and other teams are lacking some big names who have their eye of that World Champs ITT title.  Dear UCI, what was your rationale?  This is a fabulous race, and it deserves support, not to be affected by your scheduling!!  I hope there's not too much pulling out of this race early...

One of the best things about the Italian races is the way that Cicloweb throw themselves into it, and provide great coverage.  Last year they gave us finish-line video, photos, race reports and all kinds of information.  NOITV provided daily reports last year that stayed up for a week - hopefully it will be the same this year.  Last year we had to go to  Noitv.it, and look on TGNOI, and look for the daily sports bulletins.  I'm useless at this, and I miss Monty, but if anyone with a good understanding of Italian can find anything, please please add it to the comments.

As I mentioned at the start, there's a great race liveticker - in recent years, written by someone with a fantastic flair for the dramatic that I love.  It's well worth firing up Google Translate for!

And finally, look to the comments for the usual updates, blogs and links.  You know you want to!