Life among the Australians at Thüringen Rundfahrt – a morning with the mechanic!

Share All sharing options for: Life among the Australians at Thüringen Rundfahrt – a morning with the mechanic!

Back in July, I had a fantastic trip out to one of the big stage races of the women's calendar, the Thüringen Rundfahrt. Although I was out at the race with the Horizon Fitness-Prendas Ciclismo team, one of the lovely things their DS Stef Wyman did was introduce me to other teams, so I could find out more about what goes on "backstage" to enable to riders to race.

I’ve always been a fan of the Australian riders in the women’s peloton – just being in Europe is harder for them than for pretty much everyone else – if things are going wrong, they can’t pop home for a few days of home comfort, and time zone differences mean they can’t even pick up the phone after a race to talk to their friends and family – getting out to race in Europe, among the best in the world, needs a whole other level of determination. So I was really grateful for the opportunity to find out more about how the Jayco AIS Australian National Team worked – and how the organisation supports them. One Stage 2, I spent the morning with Wayne Nichols, the team mechanic – and you can read about that, and see my photos below the jump – and later I’ll tell you about a racing day spent with Liane Wild, one of the soigneurs. 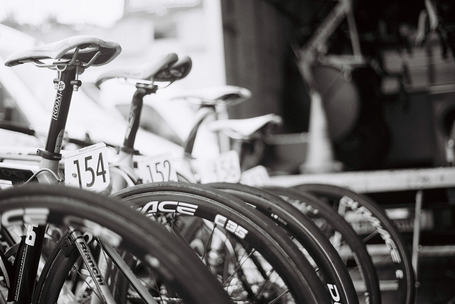 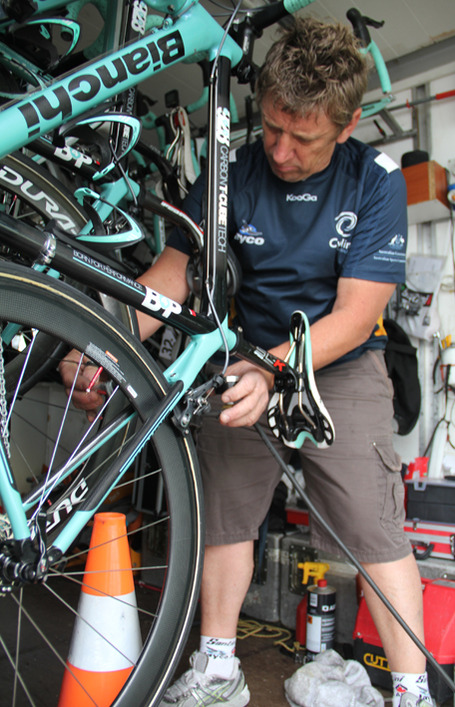 The Australian National Team is very different to the other national teams in the women’s peloton. Most of the other national teams only ride at occasional races, but the Aussies are set-up more like a pro-team – with a base that given the huge distance they have to travel, enables the riders have a "home" for the season – and they’re really fortunate in their sponsors – Jayco Caravans, who have been sponsoring the national team since the early 1990s, Mapei, Giro, Vittoria, and of course AIS, the Australian Institute of Sport.

The team for Thüringen were Shara Gillow and Ruth Corset, just back from their hugely successful guest ride at the Giro Donne with Bizkaia-Durango, where Gillow won Stage 2 and Corset came third on Stage 8; Amanda Spratt, who’d just won the Krásná Lípa stage race; Taryn Heather & Jessie Maclean; and Vicki Whitelaw, who usually rides for Lotto-Honda – a line-up which, without Corset, makes up the bulk of the Australian women’s team for the World Championships.

Supporting them were Dave McPartland, DS until Martin Barras arrived to share the rôle for the final three days, Scott Vercoe and Liane Wild, the soigneurs, and Wayne Nicholls – Nico - the mechanic.

Nico is the longest-serving member of the women’s team, working with them since 2005. Like a lot of the staff on the teams, he’s an ex-professional rider, and he lives on the base full-time for the season, returning for the Australian summer, where he works on the Jayco Bay Crits, National and Oceania Championships. 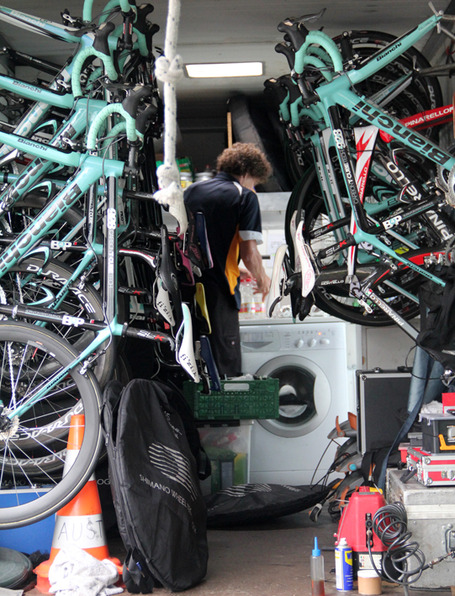 Thüringen is a fairly relaxed race for the staff - staying in one hotel for the whole week means everything is a lot easier. Once the parking has been negotiated, the Australian truck has a home for the week – and things like electricity and water is sorted for the Tour. Each team has a different set-up – the Aussies have one giant truck, with a washing machine and soigneur space at the front and bikes in the back, and that stayed parked for the duration, and two vans, used by both mechanic and soigneurs, and to take the riders to races, and a team car. Because the truck is static, there’s no need to cart the bikes in and out of the bike room in the evening and morning like other teams – it’s not the most glamorous vehicle in racing, but it’s a great set-up.

With most racing days not starting until 1pm, Nico’s days began around 8am, starting with washing the team vehicles. Staying in the same hotel as the riders, you got used to the eternal question "Are you able to get online?" – and if web access was a priority for them, the mechanics’ version of the internet – the thing that made the whole day seem easier - was water pressure.

Water is essential for the mechanics – for washing the bikes after the racing, washing t 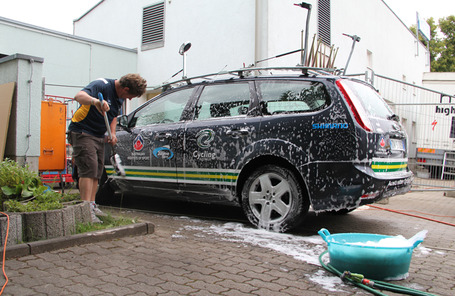 he cars in the morning, while all the time the soigneurs have loads of washing going on. As the morning wore on, you could see the pressure reducing, so mechanics like Nico, who made sure they had an early start, gave themselves one more advantage.

The car washing was a side of racing that had never occurred to me, but it’s a small thing that adds up to make the racing look professional – both for the spectators, and for the riders. When everything is gleaming, and the mechanic is chilled out with everything under control, the riders feel much more secure, and cared-for, which makes them race better. It was something I noticed about all the best staff – how calm and relaxed they were, and the way they presented a front that seemed un-flappable. Nico had this air of working methodically and smoothly, giving himself as much time as possible, so he had time for anything unexpected that came up without it putting him off his stride. He’d speed up, but there was always an aura that everything would be finished with plenty of time.

Once the car was washed and ready, every road bike was taken out of the truck, and checked. The Australian women ride Bianchi bikes with Dura-Ace wheels and components, and Vittoria Corsa Evo CX 23mm tyres, with a wet-weather tyre f 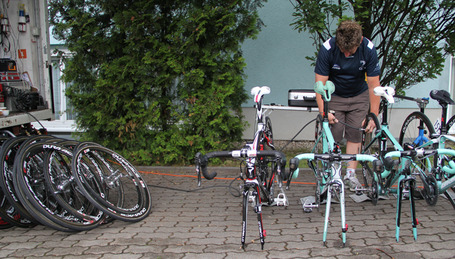 or the March and April Classics season.

For this race, there were 28 bikes in the truck – 16 road bikes and 8 time trial bikes – and 40 pairs of carbon wheels. When they have a guest rider on the team, that means they need extra gear for that rider, and to ensure that, for example, they have spare bikes set up for using with other pedals. The riders are all given a full bike fit by AIS before the season starts, and Nico has a book with all their individual details recorded. Each rider has her own saddle and a spare – the difference in saddles is one of the most obvious differences between the row of bikes – and because Amanda Spratt and Ruth Corset ride a smaller size frame, their bikes were a different model.

The bikes come out of the truck with their front wheels off, and every wheel is pumped up and checked for pressure. The pace started to steadily increase, as the gears 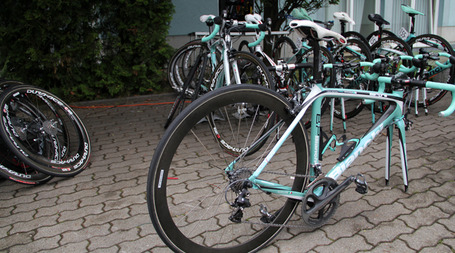 were tested, each bike was measured, oiled, and every detail was checked. The wheels were put onto the bikes, and logistics sorted out for the day.

Once the bikes are ready, the race vehicles are loaded. Five spare bikes (including one set up for Vicki Whitelaw, the guest rider in the team) go on the roof of the DS car, and there are four pairs of wheels in the car and more on top. I asked Nico how long is takes him to make a change – five seconds to change a bike over, ten seconds to change a wheel and get the rider back on the road. On Stage 1, the Australian car had been just behind Horizon, and seeing how quickly Nico leapt out with a pair of wheels and ran up the road, when we stopped for a crash, just in case, I can well believe it.

One of the things about the best teams is how everyone helps each other out – because of parking issues, the Aussie vehicles couldn’t be together, so the soigneurs helped carry the bikes to the van and load up – and later in the week, Dave McPartland was washing the van before the race. It’s not all a bed of roses – just as I asked Nico what makes a happy mechanic ("Do you reckon there are any?" was the first answer!) there was a little moment of confusion, with a hunt for the keys for one of the vans. 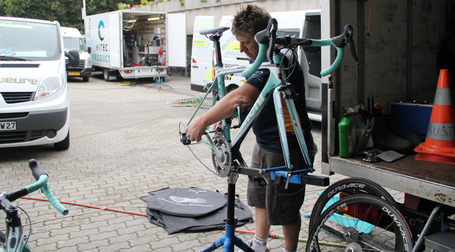 The bikes and stands went into the van, spare helmets into the car. The mechanics’ life includes an endless loading and unloading – once they get to the race, all the bikes go out, the tyre pressure was taken down to 8 bar, as it looked like rain, and there were sections of cobbles on the course, and Nico was there for any last minute issues a rider might have, so that as she heads off to the startline, she can be confident that her equipment is all under control, and all she has to worry about is the racing. Once she’s gone, the mechanic follows the race in the DS car…. And then when it’s over, does everything in reverse – reloading the vans, unloading at the hotel, washing and checking each bike and component, taking the wheels off, packing everything back into the truck…. ready to do it all over again the next day! 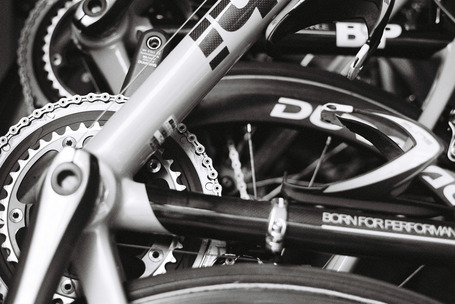 I had a great time finding out all about the "backstage". Huge thanks to Nico for his patience and his time! If you’re thinking anything sounds strange, I can guarantee it’s me writing it down wrong! Check back tomorrow, and I'll tell you about another side of the team - life with the Aussie soigneurs!