Only 10 more days* before we find out who - if anyone - steals the rainbows from the thunder god himself. Will Cav show us just how very fast he is? Will Cancellara wilfully deny that he is riding the road race and time trial to the victory anyway? Or will Phil keep racing like he has all year, that is, winningly? I don't know.

But maybe, you do?

Then here's your chance to show it, in this brand new third incarnation of the infamous World Champ game.

SUMMARY OF THE RULES

Excel file with all the info you need to know.

You will try to predict the top ten of the men's road race world championships in Copenhagen, Denmark, which takes place on Sunday 25 September. Deadline will be 21 September, which is the Wednesday before.

So I just pick the ten men I think will rank best?

Uh, no. That'd be easy. And easy is dull. You'll get a set budget of 85 points, with which you can buy your ten riders. Of course, the better the rider the more expensive he'll be. On top of that, the better his team the more expensive he'll be because in a race which is over 250 kilometres long, you'll need all the help you can get. Also, no picking two men from the same country. Diversification is key!

Where do I send my team?

You just drop me an email at subconsciouscycling@gmail.com. Please, for my sanity, use the following format: 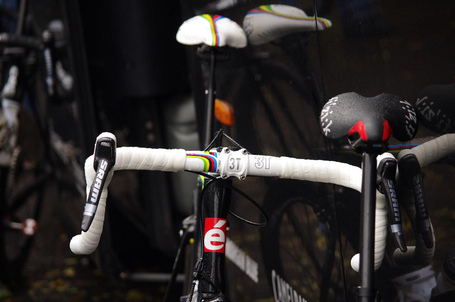 Picture by dvdbramhall, used under a creative commons license.

How is decided who wins?

Now, on to the way to win. The key to this game is time. The time of your six best finishers will be added, lowest sum wins. Don’t worry, out of the 30 something teams that played in 2009 only one – R2D2’s Team Random – had less than six finishers. There are time bonifications at the line too: 30s for the first rider and then 20, 15, 10 and 5 seconds for the second to fifth place. In case of a tie he or she who predicted the most positions right wins. If there's a still a tie after that the highest correct prediction wins (so he who correctly predicted first, third and ninth spot will win over he who got fifth, seventh and eighth right). If there's still a tie after that we'll have joint winners.

How do I find out who costs what?

The team cost is easy. If your rider belongs to a nation who gets to send nine riders, he'll cost you 9 points. If the nation gets to send six, he'll cost you six; three riders means three points and if the rider is the only one to represent his nation he'll only cost you a single point. You can find the list under the "team cost" tab.

The rider cost is determined by looking at the top ten of 16 races - all fairly similar to what they'll be facing in Copenhage - over the past two years:

For these sixteen races points were allotted to the top ten

You won't have to make the rider calculations yourself, I've already done that bit for you. You can find the list under the "rider cost" tab.

Say, for example, you want Tyler Farrar on your team. The USA gets to send 9 riders, so his team cost is 9. Farrar's individual cost is a whopping 26 points. Add that together and you get 35 points. Don't worry, there is no maths (or little maths at least), I already did all the adding for you.

What do I win?

Honour and bragging rights. Oh, and a virtual pat on the back.

So, give it to me. Who is worth what?

The riders in the list below are those who have extra individual points. If a rider you want isn't on the list, all you need to know is his nationality. You'll then know what he's worth, in the Team Cost list below.