The Throwdown: Tim Johnson and Jeremy Powers in the Circulus

Share All sharing options for: The Throwdown: Tim Johnson and Jeremy Powers in the Circulus 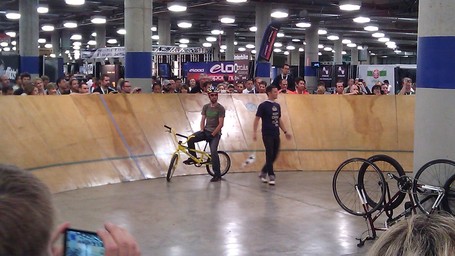 You never know quite what you're going to find at Interbike. Down in what feels like the subterranean basement of the convention center stands a tiny wood track. Like, really really tiny with a really really steep banking. It looks exactly like a salad bowl and it's called the Circulus. 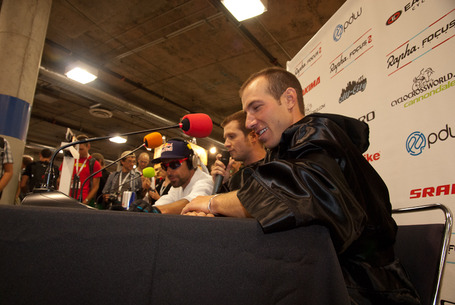 This morning, Tim Johnson and Jeremy Powers took to the Circulus for the Throwdown. The two cross stars last year rode for the same team, but this year, it's rivalry time as Tim Johnson will ride for Cannondale-Cyclocrossworld, while Jeremy Powers moves on to Rapha-Focus. In the first of many contests to come, the two did battle, pursuit style in the bowl. A special edition pair of Oakley's awaited the winner. And, of course, pride points. 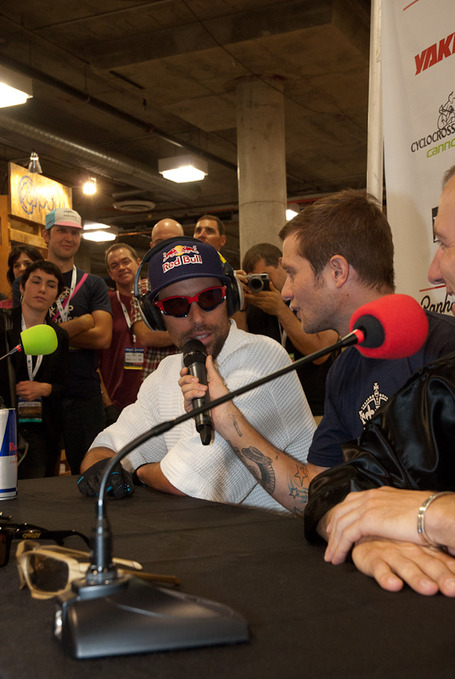 There were no cross bikes this time. Instead, Johnson and Powers went BMX stylie. Powers rocked the black and baby blue All-City. Johnson had the mean Minneapolis Mafia yellow machine. The two emerged from a far doorway like a pair of prize fighters. Johnson looked especially prime in a white bathrobe, Red Bull hat, dark shades, and a massive pair of headphones. No word on what tunes he may have been rocking in those things. With heavy metal bashing in the background, the two went three rounds at five laps each. Johnson to the first, Powers answered by taking the second.

With massive pride points on the line, both riders took it out fast for the final round. It looked tight, but Johnson took it by a slice of tire. With the checkered flag, he took a victory round. The race? Much harder than it looked. Both riders looked a bit breathless and a little damp at the finish. Just a little morning fun in Vegas.