Share All sharing options for: Cross Vegas! Catching Up With Amy Dombroski 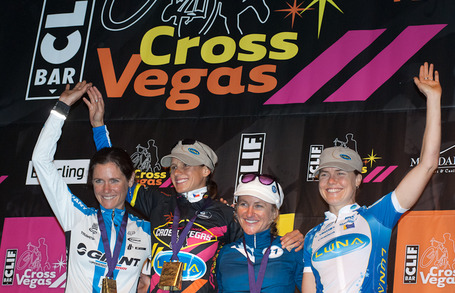 Amy Dombroski of Crankbrothers Race Club finished second behind a flying Katerina Nash of Luna Chix at Wednesday night’s Cross Vegas. Nash and her team-mate Georgia Gould attacked the race early in the game and together held off a strong chase group including Dombroski, Kelli Emmett of Giant Bicycles, and Meredith Miller of CalGiant Strawberries. Gould faded in the final lap, while Nash powered away for the solo victory. Dombroski finished twelve seconds behind the winning Luna rider. 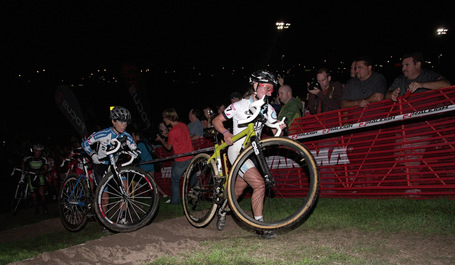 When we last chatted with Amy Dombroski, she was fresh off the icy 2010 Tabor World Championship and racing for Luna. Fast forward to now, and the Vermont native has a new team for this season, Crankbrothers Race Club, and a new bike sponsor, Ibis. A rough summer riddled with crashes and health problems left Dombroski uncertain about the coming season. "We had a lot of questions, my fitness was terrible this summer and I had no results. Is this really going to work?" The good result on Wednesday definitely helped her confidence. "Crank Brothers has been awesome and I felt some pressure on my shoulders for this race, because they were sponsoring the women’s race. I was able to ride well and I’m very happy!"

Cross was not always Dombroski’s favorite thing. She started out racing road and was not immediately enamored of the barricades and the run-ups that give cross its distinctive, and crazed, character. "When I started cyclocross, this sport’s retarded, I hate it, it makes me cry, it makes me frustrated. This is asinine!" she said of her encounter with the sport. "I was just like, I like to ride my bike, not jump off of it." Now, she jumps off the bike with the best of them, and has an U23 national title to prove it.

The Cross Vegas event draws a solid crowd, whose enthusiasm is no doubt helped along by the Sierra Nevada beer tents. A night race under the lights, it’s a party with a bike race snaking through it. "You know, I love and hate this race," said Dombroski. Like many of the riders, Dombroski’s enthusiasm for Vegas is much lower than it is for bike racing. "I freakin’ hate Vegas. But it’s growing on me. Every time I come away from here, it’s just like I’m so overstimulated right now," she said.

The strip with its bright lights, loud dance music, and long walks is not exactly a bike racer’s dream. "It’s so loud and there’s lights everywhere, daytime, nighttime, it just fades into one. I want to be in a dark cave, I want to be a bat right now," she said. This time, Dombroski has a nice prize to take home to her bat cave. 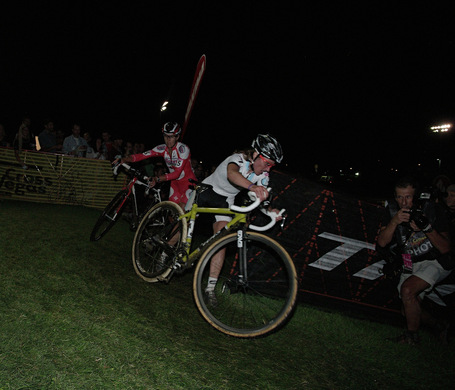 From Vegas, the Crankbrothers Race Club rider hits the road for a full season of racing on the European circuit. "Coming to Vegas, I had to pack for six months away. I’m going to Vegas with a down jacket, rubber boots, and glacier gloves. Like, this is ridiculous," she laughed. Dombroski will ride two races in New England before heading to Belgium.

This is the first time Dombroski will spend a full season in Europe. "It’s drastically different from what I have been doing the last few years," she said. In the past, she has divided her time between the North American circuit and Europe. The travel makes it difficult to hold form. "It’s always a huge struggle for Americans to go over there and be there for a week or two. Right when you’re starting to feel good, you head back over there," she explained of the ping-ponging across the Atlantic.

Dombroski has been counting down the days to the start of the season. "I had a really crummy summer just crashing and health problems and all that, and it feels like the build-up has taken forever for the cross season. But it’s finally here," said the ebullient Dombroski after Wednesday night’s race. 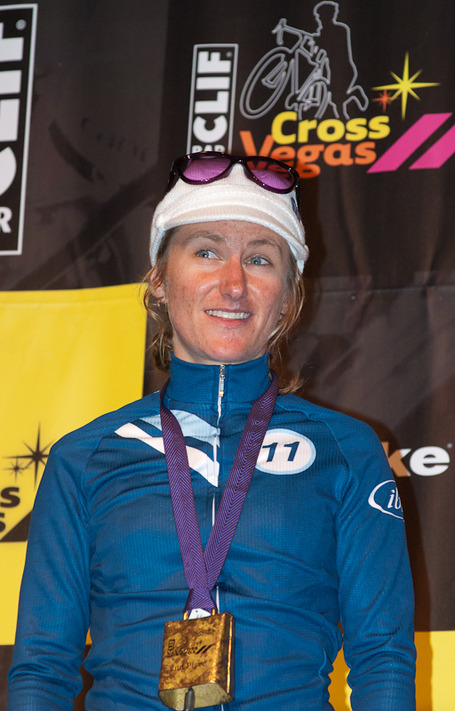