Interbike: A Few of My Favorite Things

Share All sharing options for: Interbike: A Few of My Favorite Things 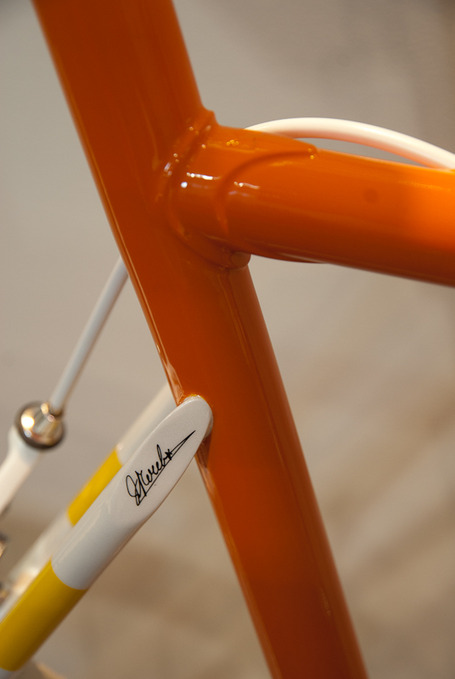 Interbike is like this vast cave filled with shiny toys. You wander around lost and confused until your eyes glaze over and your feet fall off. Oh tired toes! Around every corner lurks another beautifully painted frameset. I promise, I did not drool on them, though I was sorely tempted. Oh so tempted. We've spent the last three days in the cave and we've returned at last to the light, bringing gifts. Here, my friends are a few of my favorite things from Interbike. Because I would not want you all to be left out. 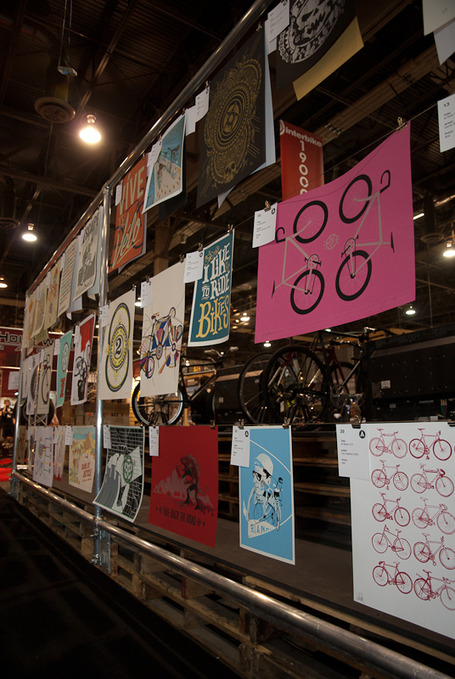 Behind the massive installation from Chrome, the San Francisco-based messenger bag and shoe company, stood one of my very favorite parts of Interbike. The people from Artcrank mounted a showing of original posters. The posters hung like laundry, one after the other. So much fun art. Artcrank hosts showings around the United States, where local artists can display their bike-themed work. 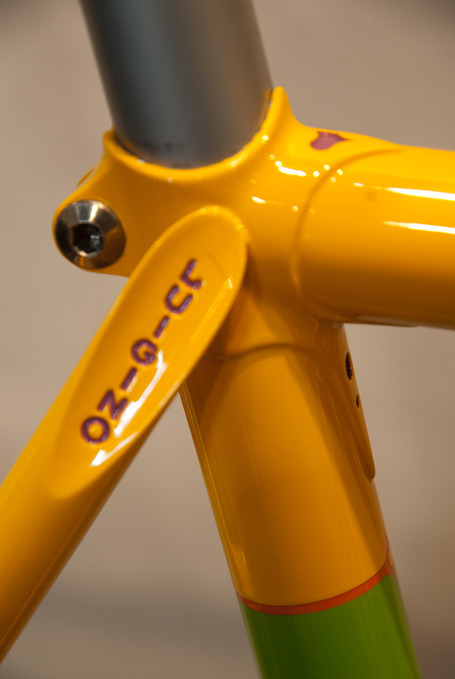 Though I ride a carbon bike, I have a deep lust for painted steel. The hipster fixie scene has adopted these bikes as their own. So trendy! And thanks to trendy, there were some lovely steel fixies on display. I was on the way to the Shimano booth to be all responsible and learn about gears and such. I came around the corner and there stood a bright yellow steel Pegoretti. So shiny. 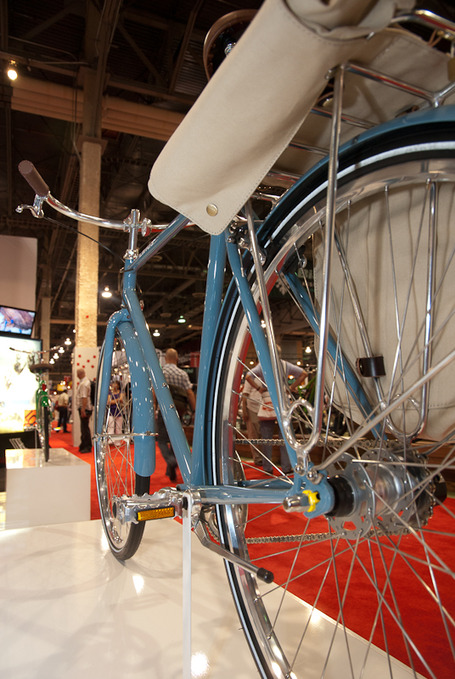 The other trend that caught my imagination is the new urban bikes. So much sexy colors and lines on these things. I think my blue Schwinn is feeling inadequate suddenly. I mean, this Linus, it's even blue. And I only ride blue bikes. This is a rule. 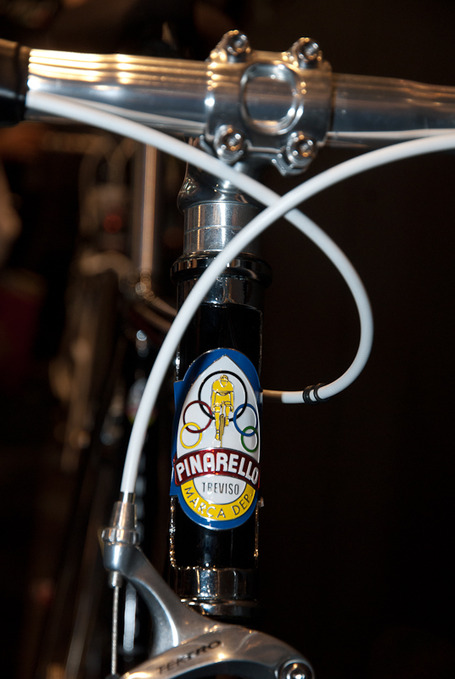 On the subject of steel bikes, can we just stare at this black Pinarello again? Yes, I saw it once. Then, I went back and saw it again. And then? I think I might have gone back a couple more times. I would so totally not kick this bike out of bed. 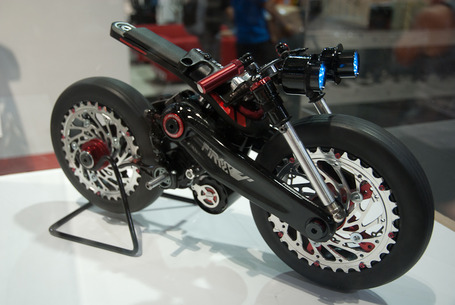 Obviously, trade shows are a massive marketing effort. I did say, obviously. Every company burns the midnight oil looking for that special angle to grab attention and stick in the memories of the glazed droids staggering about the building. Quite the challenge. 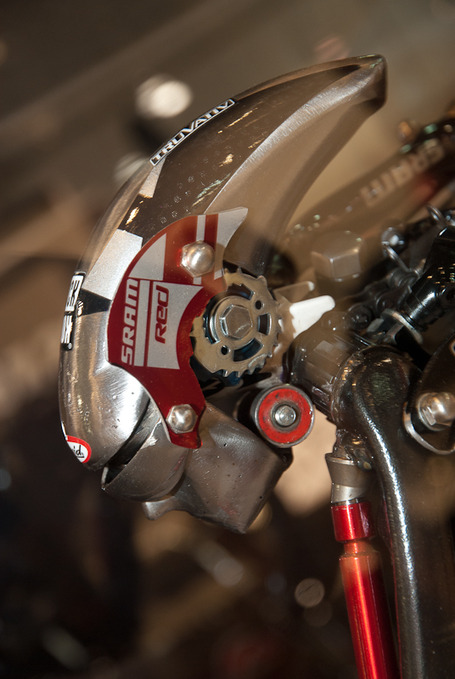 SRAM went full nerd with QR codes on every bike in their display. The codes jumped by cell phone to video and stories about the bikes and their sponsored riders. The display included a Saxo Bank bike from Alberto Contador. It also included some killer original art, which will be auctioned for charity. Yes, I like art. Can you tell? 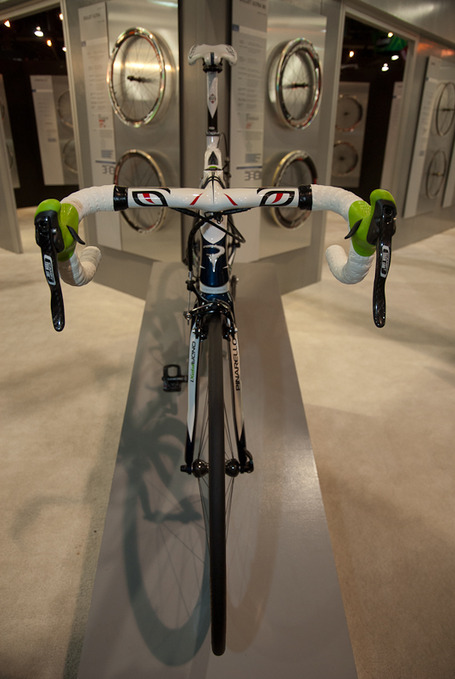 I feel... watched. I turn around, and there's a Green Movistar Pinarello with two beady eyes staring me down. It also has prototype electronic shifting from Campag. But really, I'm just wondering why it's staring at me like that. 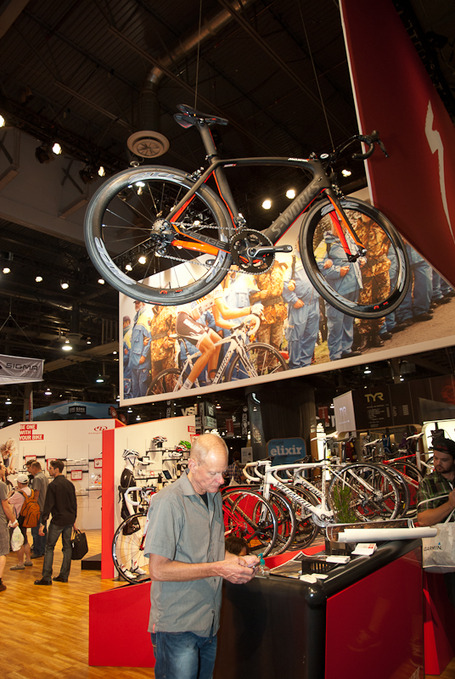 It's a bird, it's a... Specialized wants to make sure you remember that this bike is really really light. Sword of Damocles style, it was hanging over the entrance to their ginormous booth. It sorta swayed in the breeze. Which, was slightly un-nerving since it cost like a zillion dollars. Don't. Drop. The. Bike.

We've got a few more stories on the way from our adventures. Watch for them next week!

Photos by Christopher See. As always, he retains rights. Look, but don't touch the pretty pictures.