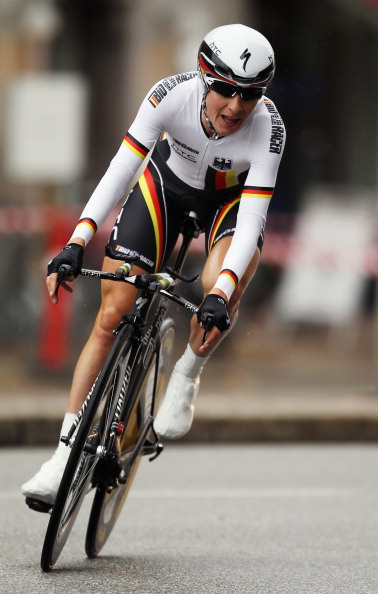 Judith Arndt of Germany is the new women's World Champion in the time trial after smoking the course today. The flat Copenhagen course suited her powerful style. The weather also took a turn for the worse for the later starters, and Arndt did her ride in wind and rain.

"A today could not have been better," said Arndt, "I was feeling very confident after having a lot of time trial success this season, and I was feeling good physically also, after preparing my legs in the Giro Della Toscana last week."

"There were a lot of corners and the course was wet, but I was able to handle everything and had no mistakes or mechanical issues." 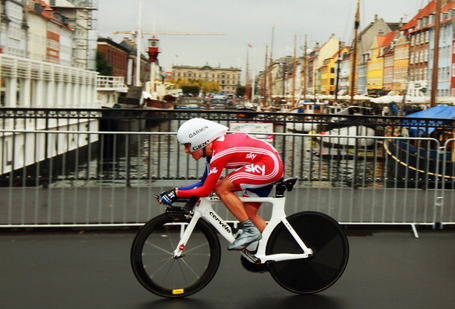 Arndt has finished on the podium in the time trial at Worlds on five occasions. Today was her first ever victory, though she has won the World Championship road race. Arndt also won the silver medal at the Athens Olympics. She memorably crossed the line giving her middle finger to the German federation officials, whom she believed had wrongly left Petra Roßner off the team. Arndt is also a past World Champion in the individual pursuit.

A talented all-arounder, Arndt has achieved countless victories in the top level stage races like the Tour de l'Aude. This past season she raced for HTC-Highroad, and celebrated twelve victories. Rmor has linked her to the new GreenEDGE women's team for next year, though the team has yet to confirm its roster.

Clara Hughes of Canada, who returned to cycling with Olympic hopes after focusing her full energy on speed skating, finished fifth at :36.79. Among the Americans, Amber Neben achieved the highest finish, eighth at :41.09. Neben was a late addition to the race, after she appealed the selection process that gave Kristin Armstrong the second spot in the time trial.

U.S. National Champion Evelyn Stevens, meanwhile, finished fifteenth at 1:21, and may have struggled a bit with the wet conditions. Because neither Stevens nor Neben finished on the podium, the selection process for the London Olympics remains wide open. None of the Americans has a guaranteed spot in the London time trial.

Marianne Vos plainly has the road race in mind, and finished well out of the medals today in tenth.

Here are the full results (pdf).