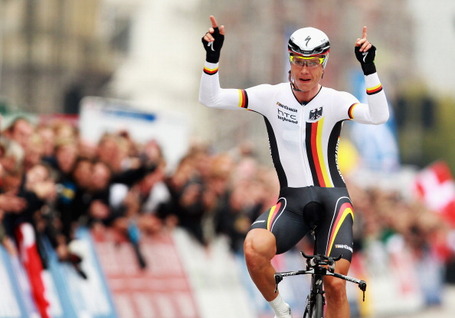 Tony Martin of Germany has won his first World Championship title in the time trial. Martin's victory marked the second time trial win for Germany, after Judith Arndt won the women's event. It was also the second rainbow jersey this week for the HTC-Highroad team, who failed to find a new sponsor and will disband at the end of this year.

"The course was pretty flat," said Martin, "I normally would prefer a few climbs, but I was able to find a good rhythm and really push myself at every opportunity to accelerate."

"It was cloudy, looking like it could rain at any moment, but we were lucky the road stayed dry and I could hit the corners faster."

"I was able to catch up to David Millar (GB) which was motivating, but my morale going into the race today was quite high. I felt great from the start."

Martin won Wednesday's event by a solid margin over second placed Bradley Wiggins, who won a gold medal in the pursuit at the Beijing Olympics. Since Beijing, Wiggins has turned his full focus to the road and has found success in the grand tours. This season, Wiggins finished on the podium at the recent Vuelta a España and carried his form to a second at the World Championshp race. 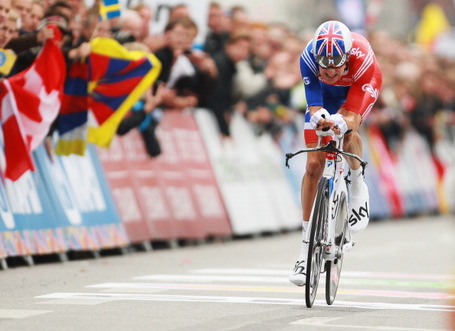 Pre-race favorite Fabian Cancellara slipped to third after he overcooked a corner and brushed the barricades. It was a disappointing ride for Cancellara, who has owned this World Championship time trial for the past few seasons.

Martin has twice finished third in the time trial at worlds. Born in East Germany, Martin and his family escaped to the west shortly before the Berlin Wall came down. This season, he had a string of successes against the watch and won time trial stages at Paris-Nice, the Tour de France, and the Vuelta a España. In 2010, Martin was the German national champion in the time trial.

With the end of the HTC-Highroad team, Martin is reportedly headed to Quick-Step next season.

Young American Taylor Phinney, riding his first elite world championship race, finished 15th at 3:52. Phinney has not found the transition to elite road racing especially easy, despite his stellar results as an U23. Still, the 21-year-old Phinney has plenty of time yet. Another U.S. rider for the future, Andrew Talansky finished directly behind Phinney in 16th.

Here are the complete results. (pdf)