The women’s World Championship road race goes off on Saturday on the same course that the men will race on Sunday. Let’s have a look-see at the race and the favorites, shall we?

First things first, this Copenhagen course is flat. There’s around 150 meters of elevation gain each lap, which really, is not much at all. The finish is a gradual uphill drag to the line, which could slow the sprint slightly. But it probably will not hurt the sprinters much more than the Geelong finish did.

You remember the finish in Geelong, right? Despite the two climbs that dotted the Geelong course, the race came back together for the finish. Judith Arndt and Nicole Cooke held off the field until inside the final kilometer, but couldn’t quite reach the line ahead of the hard-charging bunch. Giorgia Bronzini, best known for her track results, jumped out from behind Marianne Vos and won the day. Vos took her fourth straight silver medal, while Emma Johansson finished third.

This year, there are no climbs like Geelong to break up the field. As Marianne Vos told us a week or so ago, though, sometimes an easy course leads to a hard race. The strong riders have no reason to save anything for later, so they go hard from the start. Though this course says sprint to me, the right breakaway could survive in the women’s race.

Take for example the German team. The Germans are bringing Judith Arndt, who just won the time trial world championship, Ina-Yoko Teutenberg, Trixi Worrack, Charlotte Becker, Sarah Düster, and Lisa Brennhauer. So, do they ride for Teutenberg? Or does Arndt go freelancing up the road? The answer is probably both, and as we saw in Geelong, Arndt in the right breakaway is a dangerous rider indeed. Out of this group, I’ll take Tuetenberg as the best chance, but I’ll still be watching Arndt.

The United States team has a similar duality. Shelley Olds and Teresa Cliff-Ryan are a strong pair for the sprint, but Amber Neben and Evelyn Stevens will have their best chance to win from a break. Expect to see one of the Americans, like young Colorado native Amanda Miller, go out early on the attack. If Neben wants to win, it will have to be from a late break, perhaps with someone like Arndt. 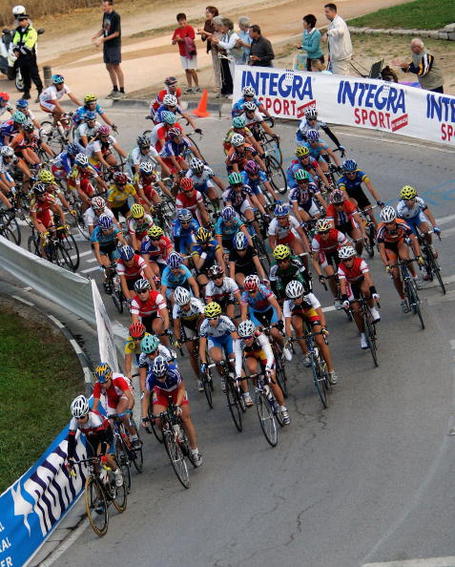 Despite their talent, the American women are a long-shot on this course, in truth. They are more at home on the harder courses like Mendrisio than a sprinter-friendly course like this one. Olds does not boast all that many results against fields as strong as this Worlds race. Olds should make the finish, unlike Geelong where she simply did not have good legs on the day. I’d give Olds and Neben about even chances. Neben has the talent and experience to get in the right break, but the course won’t do her any favors. Olds will have a hard time finding the front of the sprint in this crowd, but should find the course to her liking.

So who does have the results? Why Marianne Vos, of course. Has Teutenberg’s comment reached cliché status yet? All terrain is Vos terrain. Like any good cliché, it’s mostly true. Vos had a disappointing race in the time trial, but after four straight second-placed finishes, she certainly wants the win in this road race. She made the sprint in Geelong and very nearly won it. Vos has speed, despite her climber-looking size.

Vos also has a strong team to support her ambitions, assuming of course that they don’t choose to support their own ambitions instead. Annemiek van Vleuten and Kirsten Wild are formidable talents in their own right. If Vos falters, the Dutch team has two very strong alternatives. The main question for Vos is whether to try her chances in an attack or wait for the bunch sprint. I would not want to be in her shoes and have to make that call. I think she has to go for it early, myself, but I don’t have a rainbow jersey hanging in my closet like Vos does. Sprint or break? Roll the dice and take your chance, girl.

This year is a rare occasion in which last year’s winner could repeat. This course suits Giorgia Bronzini even better than the Geelong course did. Bronzini has strong support riders in Noemi Cantele and Tatiana Guderzo, though both riders may be tempted to go up the road and chase their own glory. In an interview earlier this week, Cantele called Judith Arndt the favorite. Cantele, Arndt, and Neben: that’s a strong late breakaway, and potentially a winning one.

Nicole Cooke was in the late escape with Arndt in Geelong. The British team last year rode smart tactics with Emma Pooley doing hard work on the climbs, and Cooke attacking a weakened field in the final lap. It almost worked. Pooley’s best chance is to go early, and she has won some big races, like the Plouay World Cup, in just that way. They make a nice team, since Cooke will do best with a hard race and a late escape. Lizzie Armitstead has a fast finish for the bunch sprint, though I’d expect her to be on duty for Cooke in the finale. 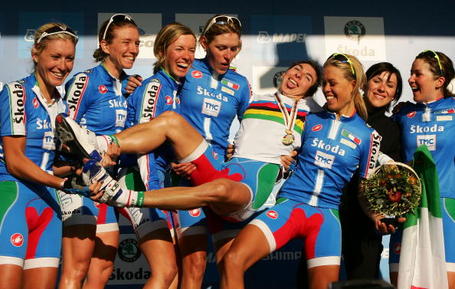 Emma Johansson finished third last year. She tried to slide through on the barricades, but Vos closed the door on her. Johansson is a powerful rider, and will do best if the race is hard from the start. The Swede, who has won the Omloop het Nieuwsblad, will no doubt hope for bad weather. Rain and wind? She likes it like that. Swedish team-mate Emilia Fahlin is a likely one for an early break, or for marking the likes of Neben and Arndt. Sarah Mustonen could surprise if the race goes full-on bunch sprint, but Johansson has the best chance for Sweden. If she finishes outside the top five, I’d be surprised.

Clara Hughes. Really, I’m not sure what to make of her chances. Hughes is a wildcard for the road race, in my view, because like Neben, she needs the right breakaway to get a win. Hughes is not going to win from a bunch sprint, but if she joins the right break late in the race, she has the kind of talent that wins big races. Hughes is also a rider to punk the sprinters in the kind of late attack that Fabian Cancellara has done so well in recent seasons. Oh my, I do like that move, and I hope someone, anyone please, plays it at this year’s World Championship. Why not a rider like Hughes?

The Australians always race these World Championship races with fire. I’d expect Chloe Hosking or Rochelle Gilmore to be their riders for the sprint. At 20 years old, Hosking is young, but she has a nice turn of speed and while riding for HTC-Highroad has had a shot at gaining experience in the top level races. She’s an outside chance for the win, in my view, but Hosking is bringing some serious talent to the table.

I’m expecting this race to be a sprint, mostly because last year’s much harder course ended with a sprint. Also, Salzburg ended in a sprint. With the exception of Mendrisio, I feel like I’ve seen a lot of World Championship races end in sprints. So, I like Teutenberg’s chances. I also like Johansson, Bronzini, Vos, and Cooke. Dark horse nod to Hosking, Olds, and Kirsten Wild.

I’d expect to see a late breakaway with riders like Arndt and Neben. Do they succeed? Anything is possible, but I think they’ll have a hard time, unless the weather is bad. If the weather is bad? I’d expect a small group finish with Emma J among the top finishers.

I am no doubt missing some riders who can totally rock this course. Like say, Grace Verbeke. Why did I say nothing about Verbeke? I wouldn’t count her among the obvious favorites, but certainly she deserves mention in the you-never-know category. Likewise for a rider like Linda Villumsen who just finished second in the time trial. You never know.

But mostly, I’m counting on you lovely people to fill in the riders I missed. Because I know you have favorites. So? Who you got? And what do you think is going to happen?

Here is the full startlist (pdf).