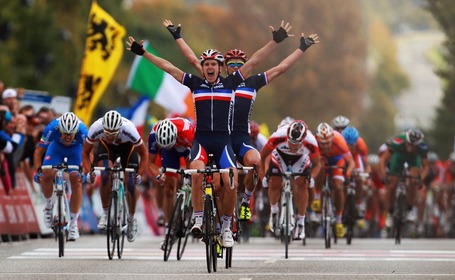 Arnaud Demare of France overcame a massive finale and a long, hard sprint to win the U23 world road race championship in Rudersdal, Denmark today. Demare came up the center with his teammate Adrien Petit, who outkicked Andrew Fenn of Great Britain for the silver medal. The sprint was a bunch gallop of the highest order, with few teams taking an organized approach in the end, apart from the Brits. But Demare had the race won with 100 meters to go, and Petit was the only rider within a couple bike-lengths of his countryman. Fenn himself was another two bike lengths back of Petit, making this a truly dominating ending for France.