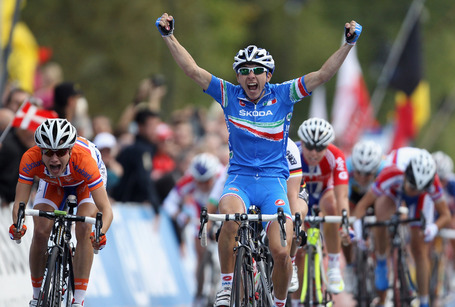 Italian Giorgia Bronzini thundered away from megafavorite Marianne Vos in the final 50 meters of the Elite Women's World Championships, repeating her victory of a year ago and dooming Vos to the silver medal for an unthinkable fifth straight year. The Netherlands team dropped Vos off at the sprint in decent position, but Bronzini, a powerful sprinter suited to the slight uphill finish, timed her jump perfectly, forcing Vos to come around both Bronzini and Ina Yoko Teutenberg of Germany, who was sitting on Bronzini's wheel. It was too much ground for Vos to make up in this slower sprint, leaving Vos and her teammates despondent and Italy incredulous with joy.

The chance of a breakaway disrupting the sprint was really nil. Rider after rider took digs at the front, but they mostly seemed conflicted between the need to do something and the lack of belief at any real chance to succeed. Canada's Clara Hughes enlivened things somewhat with an attack with 25km to go, getting as much as 48 seconds, the only serious escape in the race's final hours. Only when the Netherlands got organized on the front was Hughes reeled in, with a late dig by Maria Bastianelli of Italy scrambling the Dutch wall at the front. A late crash took out Linda Villumsen and Evie Stevens, among others, while the inevitable sprint took shape. The leadout to the line consisted of four Oranje in perfect position as the race rounded the last corner and began the kick for the line. But they failed to devastate the field or ditch their Italian and German rivals. Vos had some work to do of her own, and it didn't happen.

For Bronzini, the result is stunning. Twice now she has delivered the upset on the sport's biggest stage. Of course, twice now she's seen courses with a finish that suits her style well, and her team support has been quite good. But beating Vos is never, ever easy and timing has to be perfect, as it was.