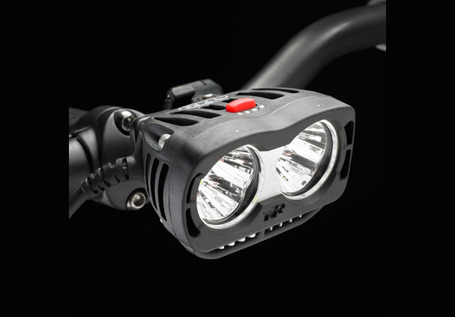 Today's installment of "Chris at a Trade Show with a Video Camera" heads to Nite Rider Technical Lighting Systems, with spokesperson Emily Miller. Nite Rider is interesting because:

Bike lights are the subject of pretty significant advancement in both the bulbs and the batteries. What cost $250 a few years ago, and came with a bulky battery, has gone down in both size and cost, quite a bit. This means that, unlike a lot of exhibitors, Nite Rider has much to say about their line of products, even if you checked them out last year. Not that everyone has to innovate -- does Pinarello need to reinvent their frame every year? But there are sectors of the industry that are tinkering, and there are others evolving. Lighting is definitely in the latter. Even the uses of lights are changing. Come check it out, on the flip.

Here's Emily Miller to walk us through Nite Rider's array of products.

The last half-decade or so has seen the evolution of the retina-melting LED lights suitable for the randonneur or 24-hour MTB racer. Not bad for commuters too, but for most of us you're paying for more than you need. On the other end, Knog invented the fun little blinker that, while not taken seriously as an illuminator, wound up elevating the role of "be seen" lights simply by being fun and cheap. Then there are devices you can put in your wheel or wrap around your frame if you want to go with the "fluorescent art bike" look. Hey, it gets you noticed, and for the sake of safety, that's half the battle.

Anyway, Nite Rider isn't alone in this business, but they bring the full range of products for racers, commuters, and casual riders -- all of whom need lights. And all of whom are seeing the options getting better and cheaper. Win!