Share All sharing options for: Men's RR: Cavendish Comes Through 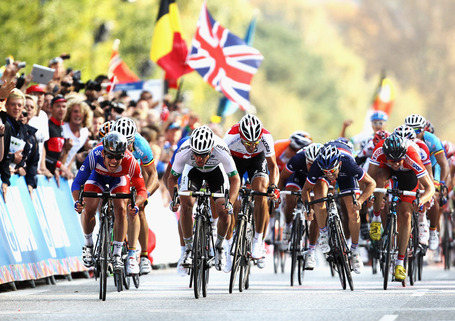 Mark Cavendish, the fastest finisher in Cycling, cemented his legacy as an historically great sprinter with a world championship in Rudersdal, Denmark. Cavendish came up the right barriers in a bulky, chaotic sprint up the false flat to power home ahead of Matt Goss of Australia and ultra-powerful Fabian Cancellara of Switzerland. Cavendish's leadout train had been swamped by various teams in the last 3km and he found himself alone for the final 500 meters, but as he has done increasingly in his career, Cavendish managed his own prospects well enough to unleash his almost unbeatable sprint. Goss, Cavendish's trade teammate at HTC, had been led to perfect position but Cav squeezed past him at the right moment, and Goss couldn't come around from Cav's wheel in time... or ever.

As with other events, there was never much doubt the race would be decided in the closing km. Thomas Voeckler of France succeeded teammate Anthony Roux on the front of the front of the race, joined by Belgian Klass Lodewyck and Nicki Sorensen of host Denmark. Dutchman Johnny Hoogerland made his signature suicide attack with half a lap to go. Britain was on the front of the chasing peloton for most of the last hour, leading all the favorites minus Thor Hushovd, the defending champion, who got caught behind in a crash. Bradley Wiggins did a time trial at the head of the pack for a huge late turn. Italy began massing at the front with 5km to go, challenging Britain's stranglehold on the front, with Spain in the mix too. Australia joined them with 4km left, moving straight to the top. But the pace wasn't fast enough to put anyone out of the mix, as Tyler Farrar moved from the back into position with under 3km. Andre Greipel materialized with 2km to go.

But it all happened the way we expected it to. Great riders seize great moments, and Mark Cavendish has long shown that he's more than just a fast pair of legs. 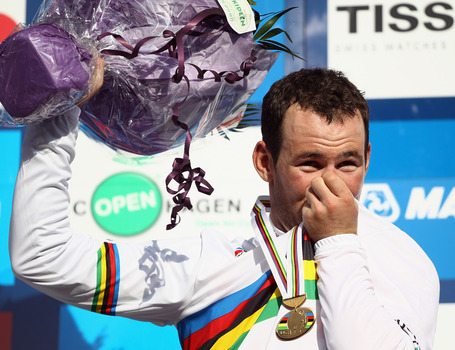