Share All sharing options for: Happily Checking the Box 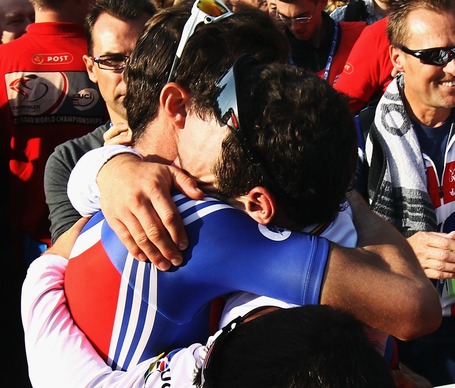 It's not too hard to tip your cap to Mark Cavendish for his World Championship triumph today, or to Copenhagen and the UCI as well.

Cavendish is inarguably the top sprinter in the world. His 20 Tour de France stage sprint victories place him sixth all time, at the age of 26. He has won a green jersey and Milano-Sanremo, two of the sport's biggest plums for fast finishers. He regularly wins about 15 or so times a year, a total that would exceed the exploits of the last five world champion campaigns combined. He wins with or without help, and he thanks his teammates in a flood of emotion afterward. About the only reason not to cheer this result is that he can be cocky. Success and cockiness, together at last. Riiight.

From the perspective of Cycling history as well, today's result feels pretty right to me. To the filp!

Copenhagen always felt like a nice fit for the race. The city was the first on the planet to be awarded the UCI's Bike City label in recognition of its renowned bike-friendliness, a point driven home further this week when much of the city was closed to cars as part of a six-day Bike Festival. Sure, pretty fixies and cargo bikes don't seem to share much DNA with the racing scene, but at least some of us feel like we're all in this together, and the celebration of cycling at any level is good for the fastmen down the line. It's not East Flanders, but there's plenty of bike passion to go around.

Geographically, after two years along the Swiss-Italian border, plus two trips to the opposite end of the Earth (lumping in Beijing), an accessible, northern destination was on tap for the Worlds. Denmark is a second-tier force in the World Tour -- hosting a perennial powerhouse team and sending its share of native sons to battle too. And yet, it's not glutted on the sport like the Big Four (BE, ES, FR, IT) nor locked in an endless wretched soul-struggle with the sport, like its southern neighbor. As much as any Scandinavian country, Denmark could be counted on to represent, to put on a good show, and to have fun in a more or less unconflicted way.

The only question was whether the racing would be dull. You can't climb mountains when all you have are mole hills. Predictably, this meant you couldn't expect too many riders to get left behind, nor too many breaks getting separation. There was no major selection happening, and everyone seemed to know it. Still, that hardly foretold the outcome, even with a dominant rider like Cavendish on the scene. Personally I was on the edge of my seat as the tension ratcheted up with each lap coming down off the counter. Inside the last 5km, there were plenty of ways for things to shake out. Solo fliers weren't going to work, but a succession of late fliers could see someone get unstuck.

Moreover, the sprint itself, on a 4% false flat, did a lot to nullify Cavendish's dominant advantage, his pure speed. He'd be fast, and was properly considered the man to beat, but some of the bigger, pure power guys who don't get up to quite the same speed as Cav on the flats might have a shot in a slower sprint. Seeing Fabian Cancellara miss out on a medal by the width of a tread confirms this. The broad finishing straight and the relative strength of teams like Australia and Belgium meant that Cav would likely have a ton of company. Anything can happen in that argy-bargy, and if Matt Goss had some sharper elbows, he could have pinned Cav's hopes against the barrier. [OK, he probably didn't know that at the time. Really, just sayin, shit happens.]

But Cav got a clean sprint and a clear win, along with his place in history. With the sprinters' box checked and their prospects headed back to the margins for the next several years' worth of worlds, it feels perfectly good to me to see them get this one. OK, the London Olympics will give Cavendish another chance at mega-glory, but after that the Worlds will be owned by the hardmen or the climbers for a while. In 2012, the race finishes on top of the Cauberg, after a dozen or so ascents of it and the Bemelerberg. Don't weep for Gilbert this weekend. After that, the Worlds head to Firenze, and we all know racing in Tuscany is rarely dull. In 2014 it's off to Ponferrada, Spain, nestled amid 2000-meter peaks in Castilla y Leon. Sprinters will be nowhere near the startline that day.

As we sign off from Copenhagen, we'd be remiss if we didn't make the connection one final time among the medalists. Team High Road really was a marvel to behold, and it's nice to see them go out on top, with its two young stars doing battle just ahead of another recent alumni. To think we'll never see another juggernaut of their likes is ludicrous... but it might be a few years.

Exciting or not, this was the right race for 2011, in the right country. And the right guy won.