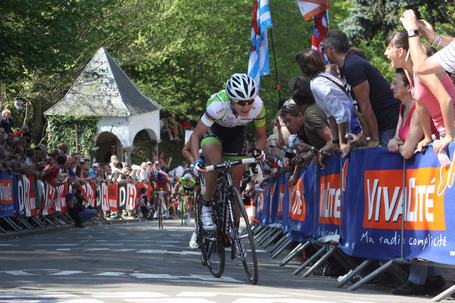 Rabobank announced today on their sports site that they will sponsor a women's team beginning in 2012. Former world champion and five-time silver medalist Marianne Vos will lead the new Dutch team. Vos said she has been working to find a new team sponsor for the past year, and is looking forward to racing within the Rabobank family next season. The existing Nederland Bloeit management will remain in place.

Interpolis and Giant will also join as sponsors for the Rabobank women's team. The Rabobank commitment runs for two years. The team expects to name more riders to the roster in the coming weeks.

Rabobank has a long history in cycling and already sponsors a men's ProTour team, a men's development team, and an off-road racing team. The bank also serves as a sponsor for the Dutch national teams.

Harold Knebel the manager of the Rabobank cycling teams said they had long discussed the possibility of a women's team, and now with Marianne, the right moment had come. Knebel said he hopes to put the Rabobank team's "expertise" to work for women's cycling. "Now was the time to jump in while the team's future was uncertain. […] Current team structure remains in place," he said.

Here is the announcement in Dutch from the Rabobank site.

Thanks to Ted for some translating assist.