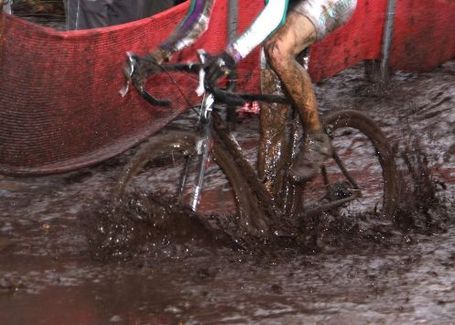 Or, as we say in Englutch, De Cross Continues!

I just want to be the first to officially welcome you all to Cyclocross Season! Since it's a quiet week, and one foretelling of transition, let's take a little tour of the upcoming season.

First, some basics. Cross [CX] is the act of riding a bike -- namely, what looks like a road bike with wider tires and center-pull brakes -- across all terrain, except where you are forced to jump off and run the bike past various obstacles (obstructions, mud, staircases, sand, water bodies, ditches, fire pits, barbed wire, people handing out beer, etc.). The sport's roots allegedly come from bike-mounted steeplechase, i.e. the act of saying to your friend, "see the steeple? That's Parike. Last one there buys the beer." And then proceeding to ride through a bunch of farmer's fields, hopping over stone walls, to get there. Beer makes people do many, many things. Anyway, the Dutch is veldrijden, or field driving. [Awesome note of the day: if you try to put "veld" and "rijden" into Google translate, with a space between them, it sees what you're doing and spits out "cyclocross." I love the 21st century.]

I'm using a lot of Dutch today, and it's not the usual jealous wanderlust. Cross is a typical event in that it was invented (supposedly) by French and completely co-opted by Belgians. We do know that the French hosted a national CX championships in 1902, and Belgium was next in 1910. We also know that the sport's hallmarks are shitty conditions, wide tires, and beer. Maybe this is a chicken-and-egg thing. Maybe if Italians embraced it before the Belgians did, we'd all be hoisting Chianti and cheering as the riders wind through an olive orchard. But Belgians got there first, so mud, blood, sausage and beer. And no coasting through the corners!

OK, back to the present, the Cross season kinda starts at Cross Vegas, which we already documented (it ran September 13) and which is prompting me to raise the curtain now rather than in October. Cross Vegas is only in its fifth year, but it offers a pretty big purse and a large, captive audience. Plus who doesn't love a trip to Vegas? So the internationals are starting to trickle in for Vegas, which is now part of the Cross After Dark series, which moved to Seattle (yay!) on September 17 and St. Louis last Wednesday. Get the big guns to the US, and keep them racing!

This continues to jibe well and result in something of an early American season, because the US Grand Prix of Cyclocross series kicked off last weekend in Madison, Wisconsin and continues this coming weekend in Ft. Collins, Colorado. This is the big domestic series and runs in November and December, but by then the European seasons have begun. Anyway, for now the early season US run has drawn former world champion Bart Wellens and his Fidea teammate Rob Peeters; American stars Jonathan Page, Ryan Trebon and Jeremy Powers; and other Europeans like Ben Berden, Christian Heule and the Rabo duo which kicked Cross Vegas butt Lars van der Haar and Bart Aernouts. The women's elite fields have been dominated by Katerina Nash, with other stars like Georgia Gould, Amy Dombrowski and Meredith Miller in the mix.

Unlike the road scene, Cross has actually benefited from a well-settled World Cup circuit. Cross isn't riven by sub-disciplines which make the season rankings apples and oranges; if you're a crosser, you go everywhere and while some places suit you more than others, it should all come out in the wash. The World Cup starts with two October races in the Czech Republic, home to defending world champion Zdenek Stybar, then skips a full month before kicking into high gear with the iconic Koksijde race on the West Flanders coast, then Igorre, Spain, then two more Flemish events linking up with the Christmas Cross Splurge, closing with January events in France and Holland and the World Championships -- headed back to Koksijde in late January. By then guys are starting to eye the road, and the curtain comes down.

Belgium hosts two Cross series -- why not? -- the Superprestige and the GvA Trofee. The Superprestige goes first, kicking off in Ruddervoorde a week from Sunday, then resuming after two World Cup rounds in Zonhoven. The GvA Trofee then butts in (starting with the delicious Koppenbergcross, a/k/a Oudenaarde), and the two series go head to head throughout November. The GvA is more prominent in December, with two races in the ultra-awesome Christmas-to-New-Year's Week, wherein you can go to Zolder on the 26th (WC), Loenhout on the 28th (GvA), and Baal on New Year's Day (GvA). Superprestige has one round just before Christmas, then two races in February, when the roadies have all cleared out.

GvA is the Gazet van Antwerpen, the subject of an earlier round of This Week in Poorly Sourced Internet Rumors. [I heard that the GvA is about to be bought by Het Nieuwsblad. Can't say who my source is, though his internet handle is "meTuckus" and he claims it's "iron-clad."] Each of the two Belgian series as well as the WC run eight races in their lot, and presumably give out a nice prize to the season victor, whose name usually begins with Sven and ends with Nys. Well, except at the WC level, where the competition is a little stiffer and consists more of guys who haven't done three hard races at home that week. Anyway, I'll let the experts weigh in on who's who. But just know Nys is worshipped as a god in Belgium and his compatriots cannot be counted on to say anything about him in a balanced way. Same goes for Albertina and Zdenek Stybar (much to Niels Albert's dismay).

Cross gets a lot of play around here for one simple reason: it's fun. It's fun to do, it's fun to watch, it's fun to hang around. OK, road is mostly fun too, but who would you rather meet in a pub, the Cross world champion or the Road one? Cross is simply more laid back, to the point of people racing in costumes and grabbing beers as they ride by. Honestly, the action on TV is nothing like the road, has none of the subtle intricacies, but it's still a good time. Links are plentiful and Sporza usually has the final lap for review by anyone who slept in (races start early, by Seattle time zone standards). We will have live chats, cover the scene when the mood strikes, and revel in photography by Chris See, who travels to many of the big US events and shoots wicked awesome stuff. As you all know by now.