Geox climber Juan Jose Cobo took his Vuelta a Espana performance up a step and reached new heights in his career with a dramatic victory on the feared slopes of the Alto de l'Angliru, a performance that bested his second from yesterday and which also put him in the leader's red jersey. Cobo attacked as the legendary road steepened, passing Igor Anton of Euskaltel and soloing home through a sea of humanity and over the horrific 23% gradients of the Angliru. The steepest pitch, coming with just under 3km remaining, claimed the hopes of race leader Bradley Wiggins (and the moto camera following him), as he and several others cracked and wobbled, giving Cobo the chance to take his 30-second lead out to 48 seconds over Wouter Poels of Vacansoleil, Cobo's teammate Denis Menchov, and Sky's Chris Froome. Wiggins came in 1.21 down, after a brave defense of his jersey that fell one mega-ramp short of success.

Defending champion Vincenzo Nibali of Liquigas dropped out of contention today, as did Jakob Fuglsang and Frederik Kessiakov, both of whom entered the day under a minute down. Bauke Mollema of Rabobank also saw his overall chances dented, though he remains solidly in the white jersey just 1.31 down. Froome and Wiggins are still both within striking distance of Cobo, just 20 and 46 seconds in arrears, with at least one more stage of consequence as the race enters the Basque Country after tomorrow's rest day. Cobo has never finished higher than 10th in a grand tour, so while he is an established climber, his ability to defend a race lead is totally unknown. Cobo becomes the ninth different leader of the race, a statistic that can sometimes be misleading in a grand tour, but in this case is a pretty accurate reflection of a Vuelta lacking in dominant riders.

Today was one of the great moments of the 2011 cycling season for those of us on the sidelines, as the race crawled dramatically up the unimaginable slopes of the Angliru, with the worst 20% sections overrun by fans. It was chaotic, to say the least, and I'm sure there will be a few choice comments about the course and the fans. But for those of us with the luxury of watching from home, it was exactly the kind of spectacle the mega-climbs promise. Results:

And your new GC, both shaken and stirred: 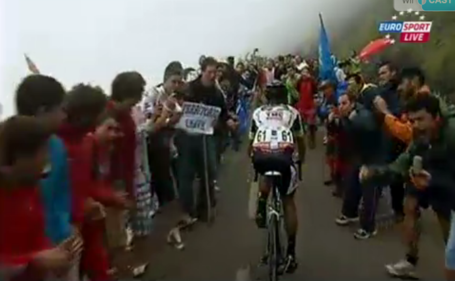