With just over two weeks until the World Championships, the women's peloton hit a final block of hard racing.  This week, there are two stage races -  Tour de l'Ardèche in the South of France, and starting tomorrow, the Profile Holland Ladies Tour.  These are very different races - as you can probably guess, HLT is a flat one,  but l'Ardèche, starting today, is a hilly one - 6 stages over 5 days, with two ITTs and some fun parcours (well, unless you're a pure sprinter, that is!)

Gwéna is the person who will have all the best information and updates - if you don't already know her blog, have a look! - and it has to be said, l'Ardèche destroys the stereotypes of French stage races by having a really great race website, but below the jump, I'll give you some preview information.  But for those of you who like that sort of thing (eg me!) this is the race that has an awesome harlequin jersey for the stage winners - here's Sharon Laws wearing it after Stage 1 last year, isn't it great?

Before we start, a quick update of yesterday's results from the Memorial Davide Fardelli ITT: about 24km, with a small but beautifully formed start list. These pre-Worlds ITTs are always interesting, giving an idea of what we might expect.  It's UCI 1.1, so VDS 5, placings for the top 10

Because there's so much great information online, these will be brief stage previews - check out the stage pages for lots more information, including googlemaps of the routes, to see how beautiful it is, and the full route information.  I love this race for all the superb information they give us, merci beaucoup! 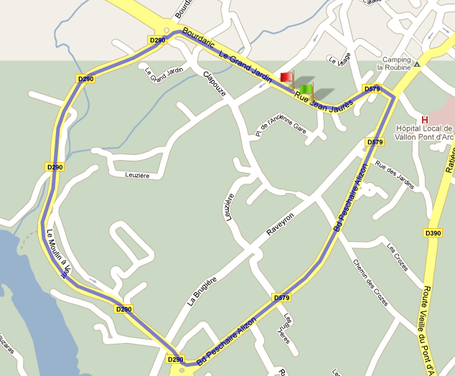 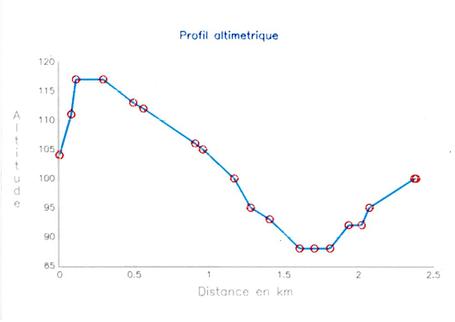 It's short, but that's a fun profile for an ITT.  Starting at 18:00, so results will come late - I bet it would be fun to watch.  Vallon looks gorgeous from the web - a little village on the edge of the Ardèche canyon, with gorges & caves & prehistoric artefacts - so any warm-up rides should be lots of fun!

The race takes loops out and back along the course of the Ardèche river - out through the hills, then skirting Montélimar, with a loop away from the river, into the hills at the bottom of the course, then back along the river, crossing a bridge just before the finish-line.  There's one mountains point and three sprint points.

Wednesday is a big day, 2 stages in one, starting with the second ITT of the race - and although a 3.5km ITT doesn't sound too hard, check out the climbing in it - it's got little sections 7% & 10%

So they've ridden an ITT already, but that doesn't stop the organisers adding in some nice climbs!  And there's an additional sprint point worth €1,000 added into the mix.

Here's how Monty described the stage last year - I'm nowhere near as good as deciphering the race info as Monty is,  but it looks like it's the same this year too.  I guess the organisers are thinking if something's this odd, do it again?

Then in the afternoon comes the seriously bizarre stage 3; possibly the most mixed up stage I can remember seeing. The profile shows a small hill at 21km, but rather than sticking a GPM line at the top there is an intermediate sprint at the far side. Then there is a very small GPM climb at 27km which seems to resemble a Belgian climb, being just 40m higher than the preceding flat, but including a bit of 7-10% on the way.

Usually this would probably be left to the break to take the points, but here’s the catch. Just 3km further up the road at the 30km point and outside the Bar Chez Paulette is the Prix Claveyrolat put up by the bar owner William Claveyrolat in memory of his brother Thierry, a bonus sprint offering to the first three across the line 500€, 300€ et 200€. (compare that with the hair curlers, coffee maker and underwear that I seem to remember Lizzie Armitstead winning last year for her 3rd place). From there the stage starts to look more normal with a big climb followed by a quick downhill run-in to the finish in Le Teil

The prizes for this race including €195 for winning a stage, €155 for final GC and €120 for the Mountains jersey, so that is a significant prize to race for, right there!

It's the queen stage, with the same start-and-finish as last year, but extended by 10km, for added fun.  Last year the stage started with 30km of climbing - this year, they've added some more on.  With a long drag of a climb, and a short-but-brutal climb, and two major descents, it looks like a stage for the all-round mountain goats - although last year the similar stage was won by distinctly-non-climber-type Lizzie Armitstead, so the long downhill run-in could once again be a deciding factor.

You've probably gathered from Stage 3 that this isn't a race for the sprinters, and Stage 4 just proves it, with the first sprint point is 30km into a climb - there might be a little break in the relentless uphill, but the real sprinters won't have their happy faces on, I'm sure!   The first GPM comes at the highest point in the race, and then sprint 2 is at the bottom of the descent.  GPM 2 comes at the 80 km point (note, not at the top of the climb) but check out the incline up to GPM 3 at 94.1.  The stage page says it's only 3.1%, but I'm guessing it's a lot steeper than that.  Sprint 3 is again at the bottom of a descent - around 30km to descend 750m - before the route flattens out for the run in into the town, with at least 1 sharp corner in the final run-in.

Although the race is hilly, there hasn't been a proper climbers' finish so far.  But that changes on the penultimate day, although it's hilly rather than mountainous, and Lizzie Armitstead won this stage too last year, and the parcours suggest breakaway rather than mountain goat.  It's 2,988m of climbing and 3,123m descending, so riders like Armitstead, who are good at the downhill, should benefit.

GPM 1 is at 34km, at the end of a "teeth of a comb" section (though check out the altitude axis, it's sharp-not-high climbing).  Sprint 1 comes 10km later, at the bottom of the hill, then the second GPM is at 62km, the highest point (and roughly the half-way mark) of the day.  Sprint 2 is at 76km, then GPM 3 at 82.8 - so if there is a break, they could mop up points in both competitions - and then after another sharp climb and descent, the final 25km is all uphill, including, of course, the final sprint point at 111km.  It doesn't show on this year's stage info, but Monty said last year that there are 5 points marked as dangerously narrow in the last 20km, so if, like last year, a big group makes it to the end, they'll need to take care

The race ends with a short stage, starting from Saint Just for 16km to up the finish town of Bourg Saint Andéol, then a big loop north and back to the finish-line.

Reigning champion Vicki Whitelaw won't be riding, as Lotto are skipping the race - and looking at the provisional start-list, the team that stands out is HTC-Highroad, who are bringing Amber Neben, who won in 2008, Judith Arndt, Evelyn Stevens, Amanda Miller, Ally Stacher and Emilia Fahlin - now there's a spectacular team!  Mind you, Garmin-Cervélo look like they can give them a run for their money - Lizzie Armitstead won two stages last year, Carla Ryan and Sharon Laws won one each, with Laws coming second overall, and Emma Pooley came second in 2008.  They're joined by Iris Slappendel and Lucy Martin, so HTC will have to watch out!

The other big teams are focussing on Holland Ladies Tour, but the national teams have some strong riders there.  Of course the French team will want to win on home soil, and I'd expect to see Christel Ferrier-Bruneau up high in the rankings, if not on the podium on some stages - Russia's biggest rider is Julia Martissova, Norway are bringing the Norwegian contigent of Hitec Products UCK, and Belgium is pretty much TopSport Vlaanderen in different jersey, with Grace Verbeke, Lieselot Ducroix, Ludivine Henrion and fan-favourite Ine Beyen.

The other team to keep an eye on is the International Team, with the South Africans who rode the Giro, headed up by the always-strong Ashleigh Moolman - go Ash!

It's vds 3, so for all you Virtual DSs out there, scoring for the top 3 every day, and points for the top 10 in GC (plus for the intermediate winner & top 3 in the final secondary jersey)

So onwards - here's to a happy, safe, exciting week of racing!  Anything you see that looks like fun about this race, add it to the comments, the more, the merrier!