After an August with hardly any racing, the women's peloton hits a busy time, with riders preparing for, or doing their last little bits in the hope of getting chosen for the Worlds teams, or if they're already not on the selection list, making sure they finish the season on top.  Riders who like hills are racing in the South of France, at the Tour de l'Ardèche, but most of the big teams are in the Netherlands, for the Profile Ladies Tour (aka the Holland Ladies Tour) for 6 stages, mostly flat, but with a final stage on the Amstel Gold roads.

Because of the traditionally flat parcours, the intermediate sprint point bonifications are vital to the General Classification.  For the last two years, Marianne Vos has won this, with Kirsten Wild in second - but according to the WomensCycling.net race preview, Vos has only won 3 stages in total, and Wild 4...  mind you, that could be because Ina-Yoko Teutenberg has won 12 stages in her time, so there's no room for anyone else on that top step!  Along with the bonis, the weather can usually play a huge part - after all, what would a flat Dutch race be without headwinds, sidewinds and wind making the rain fall horizontally?  Or without cobbles, for that matter - and that's something else that'll be supplied for the riders.

There are usually small news clips of most stages, but this year, the race organisers say there will be coverage from NOS Sports of stages 5 and 6, and maybe an hour of live coverage of the final (climby) stage - check the race website, and the comments section for more information - and of course, please add anything YOU find about the race too!  In the mean-time, you can follow the race twitter @ladiestour

As you can see, it's a looping race along the Dutch part of the Rhine, in the south of the Gelderland province.  Out to Opemert, then back through Neerijnen, out to a loop around Hollouw, then back again, ending with three laps of a loop around the village of Ophemert. 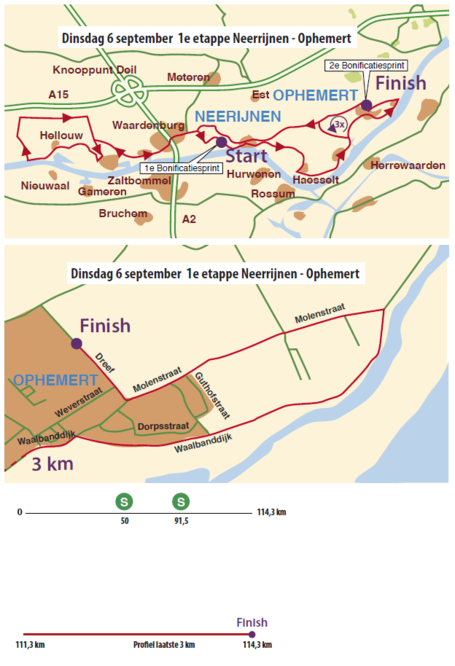 Stage 2 is the ITT - 20.5km, flat as a pancake, in North Brabant.   As you can see, it's out through the town into open (flat, windy) fields, then back for a long, straight road (with a little kink that will slow the speeds) to the finish, which is paved with cobbles.  Polite, clean, well-ordered cobbles, but cobbles no less!  As this is the Netherlands, you can see it on google streetview - this might show the run-in, or add "Ridderplein, Gemert, Nederlands" to googlemaps! 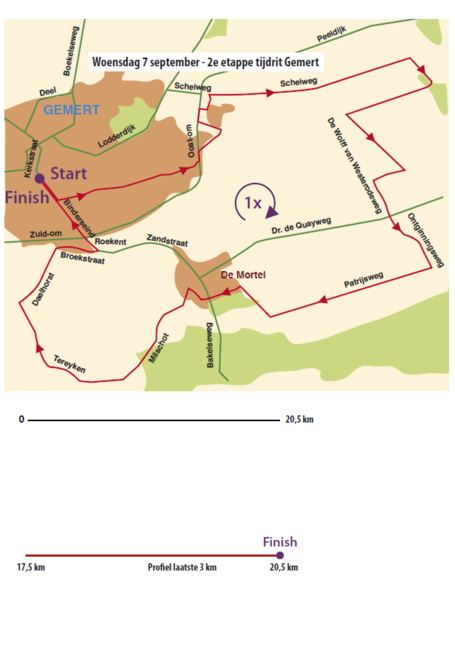 It's three laps of a 38km (ish) course, which includes an official cobbled section - a 900m narrow stretch alongside fields (this should show you the Streetview of it).  It's another stage in North Braban 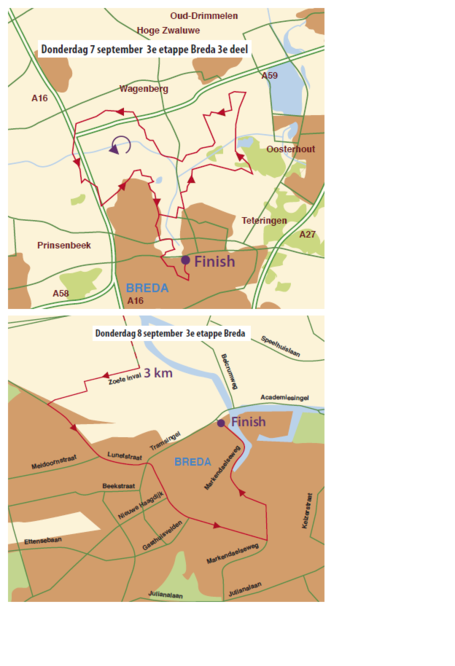 5 laps - starting and finishing in Papendrecht, South Holland, which wiki tells me "covers an area of 10.77 km² (of which 1.30 km² water)" - and looking at the googlemap, those fields the race passes are lined with drainage ditches.  So yep, flat, flat, flat!

It looks from the map like the loop includes the urban parts of the race - and the WomensCycling.net preview says that the urban portion of the race:

"includes several kilometres each lap of tight, twisting town streets. There will undoubtedly be a bottleneck at the entrance to this point on each lap, which could split the field if the weather has not done so already. A sprint from a small breakaway may be the recipe on this stage."

Back to North Brabant for the penultimate stage, and the area jut outside Eindhoven. One big, flat loop before three laps of a 13km circuit.  This is the same route as Stage 1 on last year's race - won by Ina-Yoko Teutenberg.  There's a little video from last year here, which shows cobble-ish surfaces and curvy corners before the finish-line

This is the big stage, where everything could change... unless Marianne Vos is leading the race!

The map is satisfyingly confusing, with loops aplenty.  We're in Limberg, Amstel Gold territory, and although the race doesn't hit the Cauberg, it takes in lots of the other roads.  I'll leave it to the Amstel experts to tell us how similar it is in the comments, but there is a lot of short-sharp climbing.  There could be some interesting shake-ups, and on the final day, as well!

So that's the parcours.... who's riding?

I've said already that my bet is on Marianne Vos winning this race - it's perfect for her combination of incredible sprinting and Classics talent, and it's her home race after all.  There's no finalised startlist yet, but Loes Gunnewijk will definitely be there!

Edit!  Apparently the Nederland Bloeit team will be Janneke Kanis, Sarah Düster, Loes Gunnewijk, Marieke van Wanroij, Marianne Vos & Annemiek van Vleuten - thanks @HRatgers! e can see the teams listed on the website - and it's time for yet another sigh about the fate of the HTC-Highroad team.  They've sent their super-strong climbing iteration down to France, but their sprint side is just as formidable, with riders like Ina-Yoko Teutenberg, Charlotte Becker, Ellen van Dijk (who was 3rd here last year), Adrie Visser, Chloe Hosking and I dunno, Katie Coclough as the possible 6th?

Another strong team will be AA Drink-Leontien.nl - and Kirsten Wild will want to improve on the second place she's held for the last two years.  Chantal Blaak could also be a rider to watch, especially on that final stage.

CyclingFever have got a very limited startlist, with Diadora Pasta Zara as Alona Andruk, Inga Cilvinaite, Claudia Häusler, Amber Pierce and Olga Zabelinskaya supporting Shelley Olds for the sprints - Shelley had to miss the Giro after injuries, it's good to see her back; a super-stong MCipollini-Giambenini with likely team-leaders Monia Baccaille and Nicole Cooke supported by Tatiana Guderzo, Rossella Callovi, Fabiana Luperini and Samantha Galassi; and TopGirls Fassa Bortolo, with one of the revelations of the season, Elisa Longo Borghini and possibly-more-of-a-climber Elena Berlato.

It'll be interesting to see how much the intermediate bonis on the flat stages can neutralise the climbs of the final stage, but I'm expecting to see riders who can combine sprinting with breakaway and Classics skills on the podium - as well as Vos, I'm thinking of Martine Bras (Dolmans Landscaping) and Emma Johansson, and yes, all the Nederland Bloeit riders.  It's a race for riders who can get a fast start, read the wind, and watch for any break moves.  We've seen some excellent use of the wind in similar races this year - especially from Nederland Bloeit and HTC-Highroad - so riders like Johansson and Bras who are adept at reading races could benefit.

I think World Champion Giorgia Bronzini might be riding for the Italian National Team, and she can get herself across hills, if necessary, and has a habit of riding into top form at this time of year, as does Noemi Cantele, who wasn't on the start-list for Ardèche for Garmin-Cervélo - those Italians are so good at riding for the Worlds.

It's vds 3, so for all you Virtual DSs out there, scoring for the top 3 every day, and points for the top 10 in GC (plus for the intermediate winner & top 3 in the final secondary jersey)

I'll update with the startlist when I see it - and look to the comments for results and the usual information that we find en route.  Good luck to all the riders!