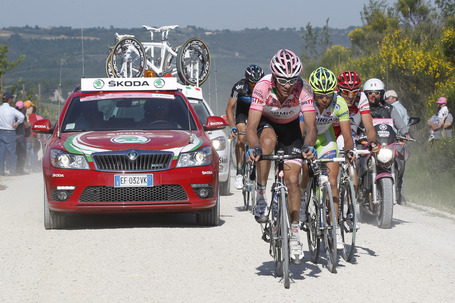 The Giro d'Italia is doing fun with the Twitter. The race organizers are collecting twitters from the riders and tifosi during the month of September. Then, they will hold a vote, and the best messsages will be printed on the Real Life Maglia Rosa at the 2012 Giro d'Italia. Who said Twitter was useless?

"Tweet your Maglia Rosa" in fact born with the aim to involve our fans to tell what arouse in them the story, the passion and emotions of Maglia Rosa. The most beautiful tweets will become an integral part of the symbol of leadership and will be printed inside.

Want to play? Simply send a message @giroditalia with the hashtag #magliarosa. If you don't have a Twitter account, you can always get one just for the contest. Then, abandon it, but that sounds kind of mean and stuff. Poor, lonely Twitter account.

So far, I think I like David Millar's entry best.