Share All sharing options for: Vuelta Stage 17: Fireworks, Froome, and a Tight Finish! 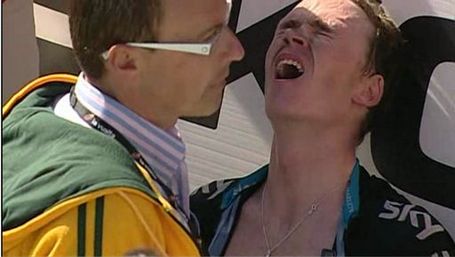 The answer you're looking for is Eric Caritoux, 1984, six seconds. That's the narrowest final general classification victory in the history of the Vuelta a España, but this year's edition promises to give that record a good run, as Sky's Chris Froome briefly cracked overall leader JJ Cobo of Geox, claiming a stage victory and time bonus that cut his overall deficit to the Spaniard to 13 seconds. Ten years earlier Jose Manuel Fuente won by 11 seconds, so this year's edition is just on the podium of all-time great finishes, but with three Basque stages and the final circuit around Madrid, perhaps Froome can further narrow things, or even steal the jersey off Cobo's back.

The action was pretty tepid until the final ascent to Peña Cabarga, a nasty little 6km climb with a 10% average gradient and ramps of up to 18%. In fact, it was on the steepest sections, with under 3km to go, where Cobo accelerated, trying to seal his victory, with a ragged-looking Froome on his wheel. But Froome was either having a moment or setting up Cobo, because he unleashed the attack of his life, dropping Cobo and briefly looking like he was riding into the overall lead as the Geox man wobbled. The climb never got very easy, and Froome struggled to close out his victory, while Cobo recovered and got back to Froome, albeit after digging way too deep to contest the stage. Froome took a 1" gap and the 20" time bonus, but Cobo got 12 of those back by taking second. Bauke Mollema took third and closed in on a podium finish, as Bradley Wiggins of Sky sagged back and the former overall leader now has to cling to a 24" lead of his own to hold off the young Dutch challenger for third. The rest of the top ten was filled by guys like Dan Martin, the two Euskaltels Anton and Nieve, Marzio Bruseghin and Jurgen Van Den Broeck, all of whom had taken their shots on the lower slopes of the final climb only to lose contact with the two leaders. Results: