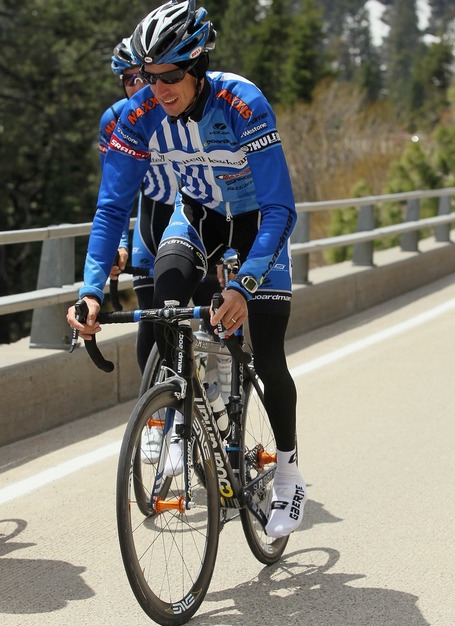 This arrived in my inbox a couple days ago, and I thought it was a nice way for a rider to say his goodbyes.

After 11 years as a professional rider, I've decided it is the right time for me to end my racing career and begin a new phase of my life. My last race will be the Giro di Padania this week in Italy. It's perhaps a strange race to say goodbye to the peloton but I think it is fitting that I end my career in Italy, where I did so much of my racing.

Charly Wegelius is a domestique, a reliable all-rounder who can climb and time-trial enough to offer solid support in stage races.  He bids adieu to the peloton without an individual win, but he was part of several TTT stage victories in his career and has some nice results of his own, including third in a mountain stage at Asturias earlier this year. He continues...

I was a stagiaire with the Linda McCartney team in 1999 and was then fortunate to join the Mapei development team in 2000. I went to ride for the Mapei team, De Nardi, Liquigas, Silence-Lotto and this year the UnitedHealthCare team. I finished ten grand tours during that time, including seven editions of the Giro d'Italia and two editions of the Tour de France.

During my career I did what I could as a rider, always trying to give my best for my team and my teammates. I think my work was appreciated and made a difference, especially in races like the Giro d'Italia.

One of the my proudest moments in that sense came at the 2006 Giro when I read in Gazzetta dello Sport that Eddy Merckx said his son Axel would have won the previous day's stage to Peschici if he'd had a teammate like me to help him. It was nice to hear such praise from some one like Merckx.

Of course I've got a few regrets and wish I could have done some things differently but I'm proud of my career.

One of the big regrets is that I never won a race. I was part of three team time trial winning teams but that is not like winning alone. I went very close this year at the Vuelta Asturias on a mountain finish but finished third after Constantino Zaballa passed me in the final kilometer.

I'd like to thank several people who helped me during my career. Sadly, Aldo Sassi, the person I'm most indebted to, is not here. He was my coach but so much more and I'm proud to have been one of his riders. He was always there for me, even when things were hard and I was despondent and unsure about my future. I'll never forget him.

I also have to thank Mike and Pat Taylor, and my early coach Ken Matheson. As many British riders known, the Taylors do so much for the sport but never ask for anything in return. They always visited every grand tour I rode and were always ready to help me. I can't remember how many airport runs they did for me but I know I can never pay them back for their support.

Ken Matheson was my first real coach and also my last because he generously helped me after Aldo passed away. He played a fundamental role in my early career and helped me turn professional with Mapei. He took me to the Mapei centre when I underwent my first test with Aldo and so kind of handed me over after helping me become a good Under 23 rider.

I'm going to miss racing but my body knows it is time to call it a day. I'm looking forward to spending much more time at home in with my wife, Camilla. Fortunately I'll also be staying in the sport and an announcement about that will be made soon. I'm as excited about my new life as I was about turning professional in 2000.

I'd like to thank everyone for their support and understanding over the years. It's been a long and enjoyable ride.

Congrats on a fine career, Charly, and good luck on whatever comes next.