One More Year for Jens Voigt

Share All sharing options for: One More Year for Jens Voigt 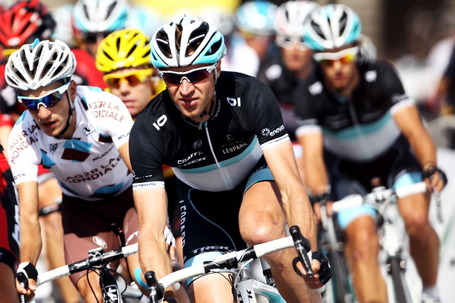 Jens Voigt has extended his contract with Leopard-Trek for one more season, according to a team statement issued today. The agreement means that Voigt will join the roster of the newly named RadioShack-Nissan team. Voigt, who turns 40 next week, is famous for his exuberant style on the bike. He turned professional in 1997, and has ridden the Tour de France fourteen times.

From the press release:

"It is my dream to bring one of the Schleck brothers in the yellow jersey to Paris, so I’m happy to continue riding with them and try to secure an overall victory in the Tour de France. It's been an exciting journey so far and I’m proud that I can be part of this team next season", Voigt says. "The recent changes in the team’s structure have been challenging for all of us, and I hope there will be swift solutions for all riders and staff."

Jens Voigt: "I may be turning 40 in a week, but my engine is big enough to support my captains. Maybe I won’t win a race anymore, but I can certainly give the young riders some advices on how to win."