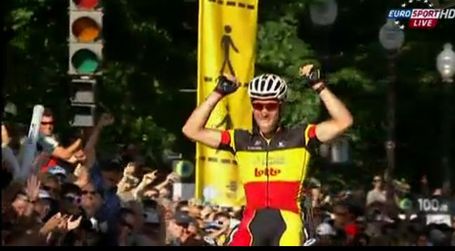 Omega Pharma's Philippe Gilbert moved into the World Tour season lead (presumably for good) with a powerful counterattack on the final ascent into old Quebec, just outkicking Rabobank's Robert Gesink for a riveting victory in the Grand Prix Cycliste de Quebec, the first of two exciting Canadian classics. Gilbert was mostly in complete control of the latter stages of the race, forcing a selection just before the final lap, launching a solo attack to lengthen out the break's advantage over the chasing peloton, then settling in for a quick breather before his decisive move. That move was in some jeopardy, however, when Gesink made a huge dig at the bottom of the final climb, briefly putting himself alone at the front with Quick Step's Gerald Ciolek nearby. Ciolek, a sprinter, cast a bit of a shadow over the final minutes of the race with his surprising presence. But Gilbert settled all that with one more acceleration with about 1.5km to go, which nobody could follow. Gesink was the only rider in the picture, and he desperately clawed himself almost to Gilbert's wheel, but no further. Rigoberto Uran of Sky rolled in alone for third, eight seconds behind Gesink.

Canadian racing completely rocks, apparently. The course in Quebec has once again delivered real excitement for the fans, and last year Montreal was even more fun. Stay tuned for Sunday. Today's results: