Share All sharing options for: CX Update: Allez a Lievin!

The Cross season might feel like it's winding down, after the veritable orgy of races over the holidays and the somewhat climactic national championships last weekend, but in fact most of the big prizes are still unclaimed. First, obviously, the Worlds happen January 29, two weeks off, so everyone is honing or holding their form rather urgently. Second, both of the big Belgian competitions, the GvA Trofee and Superprestige, have two rounds left (after the Worlds). In the GvA, Kevin Pauwels holds a firm 16 point lead over Zdenek Stybar and 28 points over Sven Nys, while Nys leads Pauwels by a slimmer (if possibly firmer) five points in the Superprestige. However you slice it, there will be scores to settle in February. 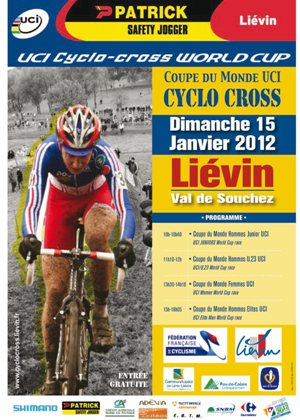 But it's January now, and from here on out it's UCI competitions. Sunday is the next round of the World Cup, in Lievin, France. Lievin is about a half-hour west of Roubaix, and maybe 100km due south of Koksijde, meaning that even the non-Belgian races (including next week's tilt at Hoogerheide) have a "greater Belgium" feel to them. No doubt that's good news for the organizers, and purveyors of frietes and beer too. It also provides a measure of comfort to the top riders, all of whom can expect familiar(ish) settings and an easy ride to the race.

The course at Lievin is pretty straightforward, as evidenced from the official materials and this rather dull video. I would post a picture of the course, but the press dossier has the security of a court filing, so just follow the first link and scroll down to page 7. It's basically a big field with some undulation on the west side. As we have seen all season, the World Cup courses don't tend to get too crazy, at least compared to GvA and Superprestige where they don't mind taking more risks in the name of fun.

Lievin has been off the calendar for a few years, as France has staked its place in the World Cup with races in Roubaix (yay!) and Pontchateau in recent years. Last time they held this event was in 2008, won then by Lars Boom ahead of Bart Wellens and Francis Mourey. That more than the French address might explain why tgsgirl confessed to knowing nothing about the course back in her season preview. So, heeding her advice, I suppose we will all learn together. And my hunch is that we'll learn that it's not much of a course. Sadly, the weather will not help, as conditions will be dry-ish over the weekend.

But if that's the case, a few notable riders might be smiling. Nys crushed the field last weekend in the Belgian Championships, with Niels Albert 52" back for second and Pauwels sagging back to tenth place, complaining of back problems. Nys has been teaching the younger guys a lesson lately about staying power, both career-wise and over the course of the long season, as he looks increasingly like the best guy out there. But tougher courses favor the Lion of Flemish Cross, so when the course flattens and mellows out, it gives the chasing trio of Pauwels, Albert and Stybar a leg up. Pauwels, for his part, felt better last Sunday in Otegem, where he beat a hung-over Nys and co. handily, so his form hasn't deserted him, and he still holds the World Cup leader's jersey by 10 points over Nys. Albert seems like his usual self, and Stybar won his fifth straight national title back in the Czech Republic.

This should be a somewhat telling race. The Worlds are close by, and the courses are taming a bit, as they do in this chapter of the season. Is Nys on dominant form, or can we expect a closer competition in two weeks? Lievin might hold some of the more critical clues. Join us Sunday for the live rap.