Share All sharing options for: Emma Johansson hit by car while training 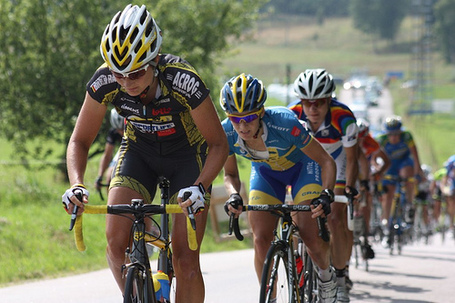 Swedish olympic silver medallist and current national champion Emma Johansson crashed in training on Grand Canaria yesterday. Apparently both she and the oncoming car managed to swerve, avoiding what might have been a fatal accident according to Emma J in an interview with Swedish television. The accident still resulted in two broken collarbones and some bad bruising. Swedish Eurosport also mention a possible arm-fracture although the Swede herself made no mention of it. She hoped to be back in training in four or five weeks considering herself lucky to escape without even more serious injuries. Recovery will be hard though as two fractured clavicles makes her very handicapped, needing help even to eat and drink

The accident occurred at the end of a 220 km trainingride. An oncoming car overtaking another car illegally, crossed over in the opposing lane in a curve with poor visibility, meeting the rider head-on.

This was the second Hitec Products - Mistral Home rider to collide with a car in the off-season. New signing Sylwia Kapusta also crashed in training earlier this winter but with less serious consequences.