Tour Down Under - The Green Edge Coming Out Party

Share All sharing options for: Tour Down Under - The Green Edge Coming Out Party 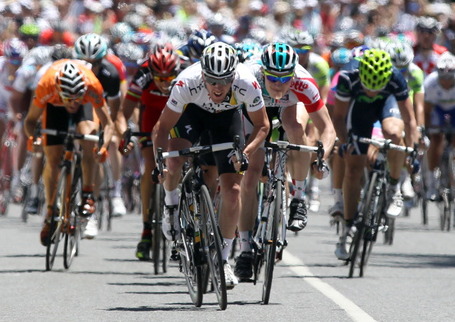 Remember when the Santos Tour Down Under used to be a nice, relaxed start to the season? In the years since it was incorporated into the ProTour (and then World Tour) calendars, stage and overall wins have become more and more important to teams in order to secure the coveted points used to justify top-tier status (and to get good follow car placement in the classics). As more top-tier riders come, it has also turned into a chance for sprinters to draw the first blood from their opponents - remember all the pre-race hype about last year's showdown between Mark Cavendish and Andrei Griepel in their first race on opposing teams?

This year's TDU takes on special significance, though - at least for one team. Green Edge Cycling, the first Pro Team level team to come out of Australia, is making its debut. Green Edge has raced already this year in the Bay Crit Series and Australian National Championships races, securing national championships in the Elite Women's road race, criterium, and time trial along with the Elite Men's road race and time trial. However, those were more a "soft" start to the season; after all, Green Edge had a seemingly superfluous 17 riders in the national championships road race. This week, global attention turns towards Adelaide for the first real evaluations of Green Edge.

The Lineup: Primed and ready to ride

With such scrutiny on Green Edge as they enter their first World Tour race, one may expect them to bring a star-stacked roster in an attempt to make sure that plans A, B, and C bring in results. And bring a heavyweight roster they did:

Every one of the riders on this roster has impressive results in the past and, often, a strong record at prior editions of the TDU. Cameron Meyer is your defending champion and an excellent time trialist, though he is unlikely to manage a repeat victory as his main time gains came in a rare successful breakaway on the fourth stage last year. Not content with bringing only last year's winner, Green Edge brought Matthew Goss - a stage winner and second overall last year - to the party. As you likely remember, Goss also won a little race called Milan-San Remo last year. Robbie McEwen has won numerous stages at the TDU and comes in to share the role of road captain with Stuart O'Grady, a two time overall winner with impressive palmares in both spring classics and grand tour stages. Durbridge, or "Durbo the Turbo," is taking the slot of Jack Bobridge, who crashed hard last week. Durbridge is no slouch of a replacement, though, as he is the reigning U23 World Champion and Australian Elite Champion in the time trial. Gerrans needs no introduction as a past TDU winner, especially after winning the Australian road title last week. Finally, Howard is a burgeoning sprint prodigy.

Simply put, the roster is designed to take no prisoners on any stages. Goss is a powerful sprinter, especially after a hard day in the saddle. He did win the GP Ouest-France in 2010, after all. While he may have problems contending with an impressively on-form Andrei Griepel, Goss should pick up at least one stage win. Howard, O'Grady, Meyer, McEwen, and Durbridge form an impressive leadout train. Meyer is a prolific gold medalist on the track, including the Team Pursuit world chamionship he shared with Durbridge in 2011. So, not only do you get fast, but they know how to work together already! If I were another sprint squad, I'd be scared of those two, especially when you know Leigh Howard is on the end of that train waiting to lead out Goss. In fact, the quintet of O'Grady, Durbridge, Howard, Meyer, and Goss share a combined 16 gold medals on the track at the Olympics or World Championships between them (if I did my math right), not to mention other medals and World Cup and Commonwealth Games wins...

Sprints only make up an expected five of the six stages of the TDU, however. This year's edition brings innovation in a hilltop finish atop Old Willunga Hill, often the crux point of prior editions. Willunga climbs for 3 kilometers at an average gradient of 7.6%, making it similar to many hills in the hillier spring classics and making it the likely deciding factor of this year's overall classification. If the race has an Ardennes-like climb in it, then who better to bring than an Ardennes specialist? Gerrans has proven rather good at riding up short climbs exceedingly fast, garnering numerous top-10 results in Liege-Bastogne-Liege, Fleche Wallone, and Amstel Gold. Last year, he had a personal best with a finish on the third step of the podium at Amstel Gold. While Gerrans may not win the WIllunga stage, he'll be in the front group. Don't forget, either, that Gerrans has a wicked little sprint too, which should enable him to garner important time bonuses in sprint finishes if needed, particularly on some of the harder ones.

What to make of it?

Green Edge isn't taking any chances with their debut race. Their roster is bloated with talent, unified behind two riders, and on top form. They clearly aim to make an early impression in their home race. But, they will walk a thin line between success and failure. If they merely win a stages of the race or place second overall - a success by most team's standards - they run the risk of massive disappointment both internally and externally. If they can't dominate their home race they've been training harder than most other teams for, what can they do afterwards? This risk is particularly high within Australia, whose media and community could hold overzealous expectations for "their" team.

At the same time, if Green Edge is successful, they could easily be written off as logical victors and their triumph underrated. Of course they won the overall, of course they won two stages, of course... While the team's record at the TDU will become a distant memory once the true big races of the season are completed, the headlines between now and Paris Nice will preoccupy the squad all week. Caught between a rock and a hard place, one thing is certain about Green Edge in their debut race - they haven't left anything to chance.