Will Willunga decide it? Tour Down Under Course Preview

Share All sharing options for: Will Willunga decide it? Tour Down Under Course Preview 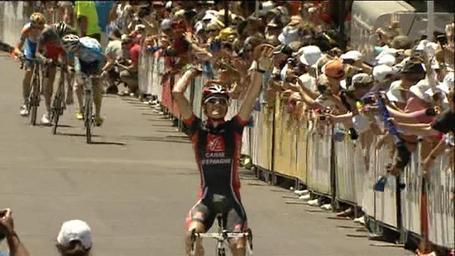 The Santos Tour Down Under used to be a sprinters' race - time bonuses at the finishes gave a rider with a fast kick the ochre leader's jersey in the early stages and all they had to do was avoid losing too much time on the trip over Old Willunga Hill - the Kemmelberg of the TDU - and close down most of the time gap climber-types gained over the top. Even if the typical breakaway that escaped over the final climb of Willunga hill stayed away to the finish, its lead was drastically reduced to the point where it posed no real threat to a sprinter's lead.

This year, though, we have an exciting new scenario! Yes, after years of public clamoring for a finish atop Willunga hill, the TDU organizers have acquiesced. Now, stage five follows a familiar route, looping over Willunga twice in the final half of the stage, but does not descend for the final 20 kilometers. Most people expect the hilltop finish to decide the overall classification, but will it? We've got some course preview, stage analysis, and math below the jump, so click that "read more" linky now!

The format of the TDU is pretty simple. There are 1-2 intermediate sprints in stages with time bonuses of 3/2/1 seconds for the top three riders through. At the finish, time bonuses are 10/6/4 seconds, which is pretty substantial. As mentioned before, these have been crucial to winning the overall in the last several years. In 2010, Andre Griepel won based on time bonuses accumulated in the early stages. While Luis Leon Sanchez won out of a breakaway on the Willunga stage, he held a scant few seconds at the finish and his threat to Griepel's lead was negated, especially with Griepel likely to pick up more bonus seconds in the final stage. As long as the leader had more than 15-20 seconds over the winner of the Willunga stage, his jersey was safe.

But now, we have to do maths. How much time do sprinters need in hand going into Willunga to have a chance at the overall? Is it even possible for a sprinter to win? Lets proceed in three steps, shall we? I am an academic, and we like to do things in steps, you know. Really, just read any introduction to a journal article, we're all about laying out the paper in overly explicit detail. But, back to bizness. First, lets see who will be at TDU, and who has form. Second, lets look at what kind of time gaps we can expect at the top of Willunga. Finally, lets put it all together and make a prediction or two, shall we?

Who will the players be?

Lets start with an assertion: pure sprinters a-la Griepel will likely loose too much time on the hilltop finish to contend for the overall (they have in the past, but more on that later). Thusly, we can break down contendors into two groups: climbers and classics-sprinters who can climb better.

Out of this group, a few names jump out. This is Valverde's return to competition after a two-year doping suspension. While he's supposedly in good shape, I think he's going to be missing some of that race rhythm. Gerrans is on great form, as he showed by winning the Australian road title last week on a hilly circuit. Sanchez is traditionally good in the TDU too. Out of the sprinter stock, everyone but Freire are likely to be in good form. Haussler nabbed a podium in the Cancer Council Classic criterium a few days ago and Goss has looked good in the races he has done in Australia too. Boasson-Hagen was flying in Oman last year, which is a month later... so expect him to be riding well too. Probably GVA too, since he'll be targeting Milan-San Remo, but he's unlikely to crack into the top 3 of many stages because he is simply not on the same sprinting level as the other guys. Same goes for Rojas, unfortunately.

2010 - Cadel Evans, Luis Leon Sanchez, Alejandro Valverde, and Peter Sagan break away over the second trip up Willunga. At the summit they hold roughly 40 seconds over Andrei Griepel, the race leader.

2011 - This time, the attackers are Richie Porte, Ben Hermans, and Jack Bobridge. Not quite the climbing talent as 2010, but strong guys. They hold roughly 20 seconds at the top of the climb over Goss, Roulston, and about 20 other guys. Griepel and Allan Davis, both more "pure" sprinters, are further behind.

If real climbers go at it, they can probably expect to gain 30-40 seconds on pure sprinters. Now how about a classics type sprinter with a bit more strength, say a Edvald Boasson-Hagen, Heinrich Haussler, Matthew Goss, Greg Van Avermaet, or an in-form Oscar Freire? My guess is 20-25 seconds. Matt Goss thinks the same, saying Valverde and similar riders can take 20 seconds on him. With a time bonus for finishing in the top 3, you're looking at 24-35 total seconds gained on this group of riders.

Putting it together: Can a sprinter still win?

Now, for the math. If a classics sprinter needs a 25 second cushion over a potential Willunga stage winner, they need to gain an average of 5 seconds per day in time bonuses. There are a few ways to do this:

Looking at this, it seems very doable for a sprinter who can kind of climb to take home the overall. It's possible, y'all. The problem facing the classics sprinters like Goss, Boasson-Hagen, and Haussler is that they have to contend with guys like Griepel (who is flying), Bennati, Petacchi, and Gerald Ciolek in the finishes of at least four stages. Simply put, they can count on getting some time bonuses early on, but not always winning. Goss stands the best chance of accruing a lot of early time, followed closely by Haussler and EBH. The real question for these guys is how Stage 2, which finishes atop a smaller hill into Sterling, plays out. In the past, Valverde, Michael Matthews, and Manuel Cardoso have won here. In 2010, the podium was Cardoso, Valverde, and Cadel Evans (in a bunch kick!), which shows how hard the finish can be. If EBH/Goss/Haussler can win, they may stand a chance. If Gerrans or one of the other climber types wins, or even places third, they stand a good chance of winning the overall.

Aside from Sterling, there are 4 stages that should end in bunch kicks. If a classics sprinter finishes in the top three of 3/4 stages, he has a chance. If not... He better pray there is a headwind up Old Willunga and the climbers have flats en-masse on Stage 5.

Aside from stage finishes, if sprinters' teams keep things together until the first bonus sprint, someone like Goss could stand a chance at the overall. It will be interesting to see how this plays out on the first two stages. Griepel and other "pure" sprinters shouldn't contest these if the peleton arrives at an intermediate sprint en masse, so it's really up to the teams to keep things together for Goss/Haussler/EBH. Don't expect Green Edge or Garmin to do this, so the impetus is really on Sky.

If intermediate sprints aren't contested by guys interested in the overall, Gerrans is the logical pick to most. But, I'm going to stray onto a limb and pick Boasson-Hagen for the win. He won't loose too much time up Old Willunga Hill, maybe 10-15 seconds, and will be up there in the sprints. Who do you think will take this home?