If you attempted to access Wikipedia today, at least from the US, you may have seen this: 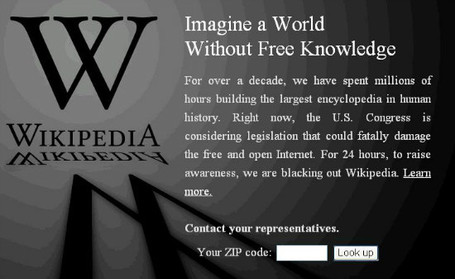 Today Wikipedia is going semi-dark (it seems to work after you do the Congressional member lookup function) to highlight its opposition to two pieces of US federal legislation, known as the Stop Online Piracy Act (SOPA) and Protect IP Act (PIPA). I want to editorialize for a moment about this more on the flip, but let me start by saying that for at least some of us, the Podium Cafe is more than just a place to experience cycling. It's an online community, a demonstration of how people can connect with each other through something as impersonal as a computer. We also generate a lot of information (as best we can) through use of online tools, from video to repositories of information like Wikipedia. I use Wikipedia to research stuff all the time. With the Google Chrome browser and its translate option, I find Wikipedia more useful than ever. If I am looking up an Italian rider or race, I can switch to the Italian Wikipedia article for more depth of information. Belgian or Dutch race? Hit the "Nederlands" language button and watch the info come rolling in. I made a small donation to Wikipedia recently to reflect the fact that they are a big part of my experience -- and consequently, a big driver of info at the Podium Cafe.

Wikipedia's funding and survival are a separate topic. If you appreciate them, please go there and donate. But today's topic is broader than Wikipedia.

And that ends the non-political content for this post. If you don't want a dose of politics right now, don't read on.

Here is the Wikipedia description of SOPA:

The originally proposed bill would allow the U.S. Department of Justice, as well as copyright holders, to seek court orders against websites accused of enabling or facilitating copyright infringement. Depending on who makes the request, the court order could include barring online advertising networks and payment facilitators from doing business with the allegedly infringing website, barring search engines from linking to such sites, and requiring Internet service providers to block access to such sites. The bill would make unauthorized streaming of copyrighted content a crime, with a maximum penalty of five years in prison for ten such infringements within six months. The bill also gives immunity to Internet services that voluntarily take action against websites dedicated to infringement, while making liable for damages any copyright holder who knowingly misrepresents that a website is dedicated to infringement.

And here is the criticism of SOPA and PIPA from the WIkipedia message on the site today:

SOPA and PIPA would put the burden on website owners to police user-contributed material and call for the unnecessary blocking of entire sites. Small sites won't have sufficient resources to defend themselves. Big media companies may seek to cut off funding sources for their foreign competitors, even if copyright isn't being infringed. Foreign sites will be blacklisted, which means they won't show up in major search engines. SOPA and PIPA would build a framework for future restrictions and suppression. In a world in which politicians regulate the Internet based on the influence of big money, Wikipedia — and sites like it — cannot survive. Congress says it's trying to protect the rights of copyright owners, but the "cure" that SOPA and PIPA represent is worse than the disease. SOPA and PIPA are not the answer: they would fatally damage the free and open Internet.

I haven't been following the debate very closely, but if this means that I can be charged with a crime for hosting unauthorized material that someone else posted, this is a HUGE threat to the Podium Cafe. Not because we have a lot of haters who would try to set me up by posting stolen video and calling the FBI. Not because we lack vigilance in the community at large; I'm sure if someone posted something at 5am my time one of you guys would have zapped it before I woke up. That happens a lot (not maliciously, some folks don't know all the restrictions). My concern is that SBN, our network, would be very sensitive about this, since they would be on the hook in all likelihood. And they are a corporation with a zillion sites, someone who would need to safeguard their interests against something like SOPA.

Maybe that hurts us and maybe it doesn't. But soapbox time... To me the whole "stop piracy" and "save intellectual property" smacks of a deeply cynical, sinister plot against the free internet. This is just me speaking, but I am deeply, deeply suspicious of the corporations behind these bills, of the Congress when the subject of highly profitable matters comes up, and of all excuses to "save IP." I believe in some basic way in intellectual property protection, but the US system is so UNBELIEVABLY fucked up that IP has become simply a means of control. There was an episode of This American Life, an American radio magazine par excellence, about the subject, including examples of someone patenting the "thermal refreshment of bread" (that would be toast) and IT companies getting patents for countless ideas which had already been patented. The purpose of all these shenanigans was to foster lawsuits to make money.

Pirated movies and music are a threat to artists, as they hurt sales and profits of people who do things to inspire us. There are a zillion shitheads on the internet these days posting illegal streams and photos for their own profit, stealing from the artists, and yes, from the major corporations who promote the artists. Stopping internet piracy is a perfectly defensible goal. But accusing ME of a crime and placing the burden on ME to stop piracy of their stuff is not about protecting artists. It's about exerting control over the Internet -- the single most profitable scheme anyone could dream up in 2012. Control the Internet and you could buy your own island in the Caribbean in about a month. Of course people are going to try this.

It will take eternal vigilance, I suspect, to keep the Internet free. Let's do our part. US readers, if you're with me, please take the time to express your opposition to SOPA and PIPA today.