Perchance to Dream: Could Gilbert Win the Giro Someday?

Share All sharing options for: Perchance to Dream: Could Gilbert Win the Giro Someday? 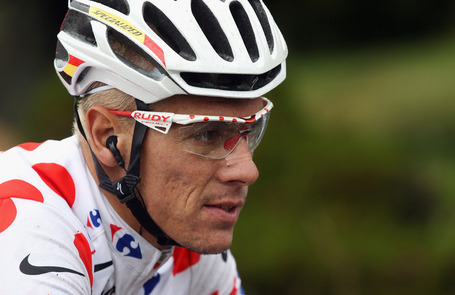 Sporza (via GvA) is asking this question today -- can BMC's Philippe Gilbert, slayer of pelotons in the one-day world, win a big stage race? The Belgian press offers no real answer; BMC manager Andy Rihs suggests that something like Paris-Nice or Tirreno-Adriatico is in the cards, which of course it is, since the favorites for March races are kind of self-selecting and the decisive climbs are not especially Alpe-like. But I don't see Gilbert busting out for a winter race whose prestige is nice but far below the monuments he's been feasting off of lately. If Gilbert were to set aside his usual targets, it wouldn't be for Paris-Nice. He would aim much bigger: the Giro d'Italia.

Come pondering with me, on the flip!

I think it's not out of the question, even if it would always be a longshot. From Gilbert's perspective, this has to be his ultimate stage racing goal, because we can say for certain that the Tour de France isn't happening, ever. The maillot jaune is only available to the elite high-alpine climbers who can time-trial, and whatever Gilbert's strengths, at age 30 he cannot transform himself into this kind of rider, even if he had that sort of ability in him someplace. Could he come close in the Tour? I strongly doubt it but you never know. Win? Nope.

But the Giro is another matter. Maybe the new management won't do this ever again, but from time to time the Giro has created a classics rider's course. In 2007, Danilo DiLuca won on the strength of banned substances time bonuses earned in short climbs. Il Killer won on Montevergine, a 14km ascent with 5% average grade, propelling him into the maglia rosa, which he lost, then reclaimed in Briancon on a day where he survived some real climbs, and then won another bonus by outsprinting his rivals after a 1.5km classics climb. From there he simply held on, against a Giro-esque collection of guys who were middlin' Italian threats (Mazzoleni, an aging Simoni) and kids not ready for prime time (Andy Schleck, Ricco). The time trials were no biggie and the Zoncolan didn't kill DiLuca. Result: a classics-style win.

An even more extreme example was 2004, generally regarded as the easiest Giro in recent memory, won by Damiano Cunego on stage victories at Montevergine (do you see a pattern?) and Bormio. Then, Cunego got a bit lucky since his primary threat was his teammate Simoni, and he hung tough over the Mortirolo to secure the win. Then there is the ultimate modern example, Francesco Moser winning the 1984 Giro. Moser's strengths included time trials, track, and things like the Hour Record. He was a three time winner of Paris-Roubaix (!) and double winner of Lombardia. In other words, he could climb but the Sheriff was primarily a power machine. And an Italian legend, so they rigged the 1984 Giro for him by ironing out the course, allowing Moser to pad his lead on time trials and escape with a one-minute win over Laurent Fignon.

These three examples have one common thread: the winner was Italian. And in two of the three examples I think that was no accident. It's safe to assume that while the Giro wouldn't mind seeing Gilbert, one of the very biggest stars, enliven the race, they will not be looking for ways to get him a win. Furthermore, RCS has totally changed hands, and while the new regime is presumably open to ways to have fun, it's possible that they consider these past courses too gimmicky for their tastes. There is at least a 50% chance that Gilbert will never get a shot at a favorable course. But he might.

If they do go this route in the next, oh, 4-5 years, then the question will be whether Gilbert takes an interest (answer: maybe but this is blatant speculation) and whether the competition lines up in a favorable way. On the latter, more speculation, but let's just say that the Giro is a priority for Italians of all stripes an quality, and for foreigners who can be dissuaded from focusing on the Tour. An easy Giro course might tempt guys from the back of the Tour top ten, or it might drive them away. Certainly the pure climbers of foreign pedigree would be less interested than they usually are, which isn't much. So Gilbert could see a manageable level of competition. As great as the Giro is, the level of GC competition can get pretty thin.

So then there is Gilbert himself. Can he climb? I think we all know the answer there -- yes, up to a point. He was second in the 2011 Tour stage to Super-Besse and not too far off in the Luz Ardiden stage, 24th, which isn't great but there's about a 1% chance that he cared about his GC position. Last year Gilbert was going for Green, and on a mountain stage once he saw his rivals' and own points chances diminished it's impossible to imagine him emptying the tank. On the negative side, he lost his overall lead in the Vuelta in 2009 on the Xorret de Cati climb, dropping 2' to Igor Anton et al. That may be the most useful data point, one where Gilbert was probably trying in a grand tour to prop up his GC standing, and it didn't go well. On the other hand, he had held the lead there for five days, and might have been thinking about Geelong as the Vuelta got closer to the end. Also, he crashed earlier in the stage that day, getting left behind by the Anton group. So maybe he let it go.

Anyway, we do know that he's decent on long climbs, as opposed to great. Can he limit his losses? Sure, against a mediocre field and/or on more manageable GIro climbs. Can he time trial? He's currently the Belgian national champion in the discipline, which doesn't make him the next Cancellara, but probably means that he can do well in the 25-40km range that is typical of the Giro. Again, data points are suspect -- how often does he try? -- but he was sixth in the final ITT of the '09 Vuelta, a 26km flat affair. I'm pretty confident he could hold his own here.

Can he make it through three weeks? Another speculative point, but he was a respectable 38th in the Tour last year, ahead of Tony Martin, LuLu Sanchez, Linus Gerdemann... OK, maybe I'm not proving the point. He was very close to David Arroyo, a better comparison. The rest of the three-week data points are close to useless. Maybe a better data point is what he can do in a couple weeks of the classics. He won four hard races in 12 days last spring in the Brabant-Ardennes campaign. Presumably he rode pretty hard in between, not unlike what you would do in a sprinters' day of the Giro. The guy can definitely recover well.

I think it's possible. If he gets the right course, and decides to go for it, and the Contadors and Nibalis don't follow him to Italy in May. It's possible. Or maybe three days of being snowbound at home is messing with my head. Still, it's fun to dream.