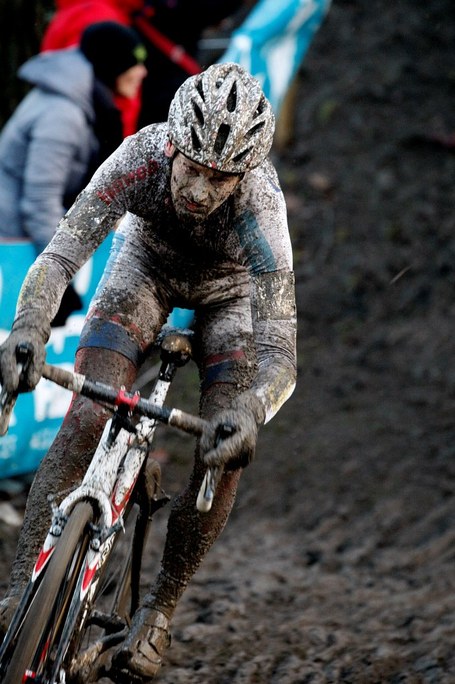 Kevin Pauwels was off the pace at Namur's World Cup stop. Don't expect that this weekend.
Photo courtesy of Patric Verhoest

Ladies and gents, I come bearing sad news indeed. The cyclocross season is within a month of being over. As with the first leaves to adopt a brilliant hue in fall, the end of the World Cup marks the beginning of the end of a season. We approach the zenith of riders' campaigns at the World Championships, and then we slowly fall into to the off season where mud and barriers are replaced by cobbles and climbs that stretch longer than 200m. The series wind down one by one until little is left except anticipation of next year.

Before we get completely melancholic, though, let us celebrate this last occasion on the World Cup calendar. It is the last hurrah of a series of last hurrahs coming in the next two weeks. And, to be honest, we're still building towards the peak of our excitement, so let's get pumped up! This weekend offers us a final chance to evaluate who is hot and who is not, who is rising and who is falling. While we cannot infer everything from performances this weekend, the results will provide fertile grounds for ample speculation on who will have the legs come next weekend.

Now that you're excited, don't you want to read about the course and everything? You do now? That's what I thought. So follow me below the jump!

What GS had to say early this fall:

Hoogerheide is in Holland, but it's so close to Belgium that you won't know you're in Dutchie land. It's also really close to the kalmthout-Essen area, so Aernouts, Meeusen, Styby, Pauwels and Sanne Cant will feel right at home. There's not too much height difference - it is les pays bas you know - just one bridge and one steep climb. It's fast too, the riders only have to get off the bike twice.

Also, we have a map: 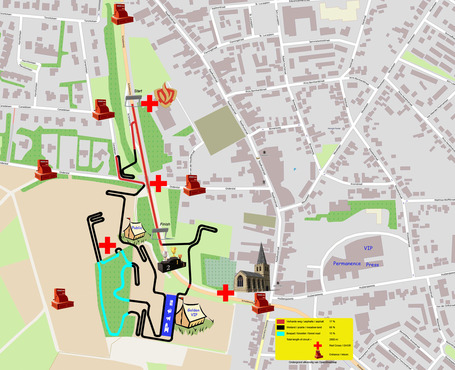 Having watched the race last year (on a grainy feed, of course), I can attest that it is fast indeed. Last year it was muddy and it was still a fast race. While it is fast, it is also super twisty. With all the 180 degree turns, it resembles much more of an American style cross course, though the Belgians and Dutchies tend to make their courses wider than we do out here, bringing speeds up.

Fast races are fun, yes. But we all love a knock down drag out fight, and you're more likely to get that on a slow, muddy course. We'll have a chance at that, fortunately, for the weather gods have smiled on us. It has rained and the course is sloppy indeed. So soggy, in fact, that the course was not open for training this week in hopes of forestalling the nasty rutted destruction that is sure to come as soon as 33mm Dugasts hit the grass. Unfortunately, after rain the course still doesn't get super super muddy, especially up in the forest. So, we are looking at a race a lot like last year's.

Hoogerheide World Cup Bar Cam Footage from Behind The Barriers on Vimeo.

Will there be drama?

Middling chance of drama. Kevin Pauwels leads Sven Nys by a scant 20 points in the overall. Now, that's unlikely to reverse itself with Pauwel's propensity to place well on fast courses, but Nys will certainly throw everything he has into this. In order to tie Pauwels on points (which I believe would give Nys the win overall), Nys needs to win with Pauwels finishing fourth. Not so likely, I think. On a similarly fast course in Lievin last weekend, Pauwels rode away from the main group early on, was joined by Zdeneck Stybar for the majority of the race, and only lost a chance at the win when he tripped and faceplanted on the stairs on the last lap. He still finished second, by the way - that's how far those two were off the front. Nys finished fourth in Lievin, so it's hard to see him besting Pauwels on this kind of course.

Who will win the day? It's true that Neils Albert has won the past two years at this venue; last year, he made a double victory by crossing the finish line first clad in the World Cup leader's jersey. But, after Neils finished a dismal 12th last weekend, it's hard to see him running away with the race. Unless, of course, he was training through last weekend to peak for Worlds (one week from now), which is totally conceivable because he's well out of the running for the overall. Hey, it's possible. The most obvious favorites are Pauwels and Stybar, though, after their dominant display of power last weekend.

Side note? Pauwels was 2nd here last year and Stybar was 4th. It's definitely a Pauwels style course, I think.

For the women, it is hard to see past Marianne Vos. She has won the past 3 editions of the World Cup, after all. More important side note: Marianne Vos has only raced the past four World Cup races. So if she's won the last 3, she is en fuego, big time. But don't forget about Daphne Van den Brand, the fabulous Dutch girl with the pigtails who is leading the World Cup and has finished behind Vos for the past two weekends and beat her at Koksijde. She probably won't beat Vos, but she stands little chance of losing her overall lead. Also, on a power course it's hard to see Katie Compton far from the win. She did beat Vos here last year and she looked stupid powerful at US nationals two weeks ago.

Want something else to watch in the women's race? Look out for Kaitlin Antonneau, the barely-20-year-old from the US who finished a career best 10th at the Namur round of the World Cup a month ago. She just finished 2nd to Katie Compton at US nationals two weekends ago. Do cheer for her, she's a cheery and friendly girl.

Race times are listed below. Someone is bound to throw up a live thread and links to coverage should be up on Sports-Live and other sites if you live outside of the holy land.

Bonus! Video of the last two laps from last year!