Sporza: "Naughty Belgians Will be Penalized!"

Share All sharing options for: Sporza: "Naughty Belgians Will be Penalized!" 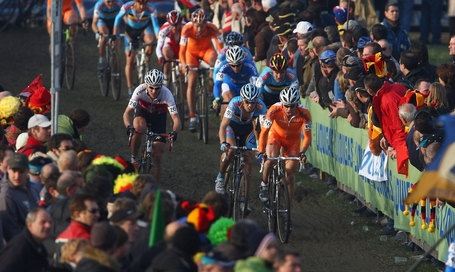 Honestly, what better hook to a story could there possibly be? Actually, despite my distaste for posting links, this one is too good to miss. Not because of the naughty Belgian angle (does Albertina have the fainting couch?), but because of the awesome backstory and what it says about national team racing in Cyclocross.

The main story is that Belgian national team riders had better ride for the Belgian national team (and not a trade teammate), or else they will be sent to their room, or have their beer taken away, or something. The backstory is that Richard Groenendaal, pictured above in the lead, was a stud crosser back in the turn of the millenium, and still rides professionally for AA Drinks. As a Dutchman, he naturally found himself in Rabobank colors at the peak of his powers, a period where he won four World Cup titles, eight Dutch championships, and yes, one World Championship. That was in 2000, when Groenendaal was riding for the Netherlands, while his 23-year-old Rabobank teammate Sven Nys was riding for his home nation of Belgium. Nys was then coming into his own, having just won his first World Cup and shown promise of the greatness to come. Nys was a loyal Rabobank soldier, two years into a ten-year association, so when he saw his Rabobank teammate Groenendaal jump on the first lap of the elite UCI World Championships race in Sint-Michielsgestel, it was up to either him or Belgian rival Mario De Clerq to chase.

What happened? You probably know, but click through anyway!

Well, De Clerq chased, but Nys -- the only guy strong enough to reel in Groenendaal -- did not. According to this site, Nys and Groenendaal, who had been dueling teammates all year, had been called to meet with Rabo manager Jan Raas to discuss the worlds, and had agreed that they would not chase each other down. There was no agreement as to who would win; just a truce against the worst-case scenario where they dueled each other to a standstill and let De Clerq or another non-Rabo rider steal the title. Groenendaal seized the moment, first by playing head-games with Nys and arranging to be given the number 13, Nys's lucky dossard. The young Nys flinched when Groenendaal attacked, and then told De Clerq he was following orders not to chase. Groenendaal won, Belgians brooded, and national team naughtiness fell out of favor.

Nobody came out ahead, except maybe Rabobank, who assured themselves of a rainbow jersey to parade around. Groenendaal sounds more upset now about the fact that his victory isn't appreciated than the reasons behind why maybe it shouldn't be. Not sure what Nys thinks about it, but his worlds karma is nothing to brag about. De Clerq won a second title in 2002; not sure that counts as justice or not, but he came out OK.

National team shenanigans are as old as national teams. This can come as a shock to Americans, who until recently enjoyed a high level of citizenship homogeneity in our big sports. To this day football is almost entirely American. Only hockey wasn't, and Canadians weren't so different as to turn off fans. [And this may explain why soccer and cycling have struggled to gain acceptance, thanks to their unfamiliar lack of American stars.] So when we formed national teams, there might be infighting, but you could be sure nobody was going to secretly work for Mexico or England or whomever.

One last question: why is Belgium issuing this warning? The big stars are pretty evenly distributed across trade teams, so while each of the top four of Nys, Pauwels, Albert and Stybar can count on seeing some trade teammates around early on, none of those teammates are likely to have much of an impact on the race. And if they do, well, how will it hurt a national team? Klaas Vantornout helping Pauwels means two Belgians working together. Not sure where the shenanigan potential lies.

Photo by Michael Steel, Getty. Pictured in front is Groenendaal in 2008, when he helped Lars Boom -- a trade and national teammate -- to victory.