So, by now I'm sure you know we have CX worlds coming up this weekend. And you've probably also - if you're an English speaker at least - giggled at the name Koksijde. And you've heard talk of sand, maybe. But, where will they be racing, really? Come find out all about the circuit, below the jump! 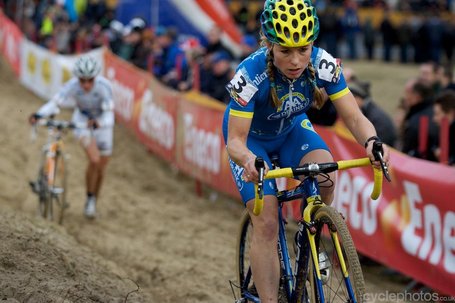 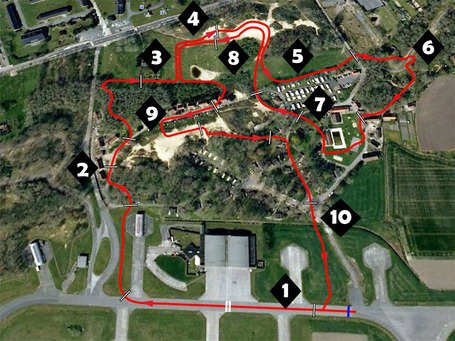 The race starts at the bottom right, about where the asphalt thingy that looks like a tennis racket is. The start and finish are on asphalt, as you may remember from this controversial sprint. We turn right onto grass where we'll be still be sprinting as fast as we can, in order to reach the first sand patch in a good position.

It'll be important to start well. Get stuck behind a lesser god in a sand patch and you could loose a lot ground early in the race. And World Champs, they're raced hard. The first sand patch starts with an uphill bit too: if you're in front and still have speed from the grass patch, you can stay on the bike and race up that hill. Lose that speed, and you're walking. The first sand patch is short, up that small incline and immediately back down (look out for crashes!), a short asphalt stretch again, and then a corner on to more grassland.

If it's dry, the next grass patch will be fast, an ideal spot to make up some ground you may have lost on the sandy incline. If it's muddy, this'll be less easy, as the ground will be soggy rather than hard. We turn right on the same grassland and then left again and we've reached...

The pits! The pits are important, cause sand, it gets everywhere. It clogs up chains, brakes and so on. The riders can enter the pits on every lap, but if they enter they either have to a) switch bikes, or b) jump on and off the bike. Just riding through the pits isn't allowed. All mechanics will be standing on the right, so the riders can jump of their bike on the left, hand it off to a mechanic and then grab another one on the go. Except for Pauwels' mechanic, who'll be on the left side of the road, cause Pauwels is a leftie.

And the cyclists are gonna need a good functioing bike, cause we then turn right towards... 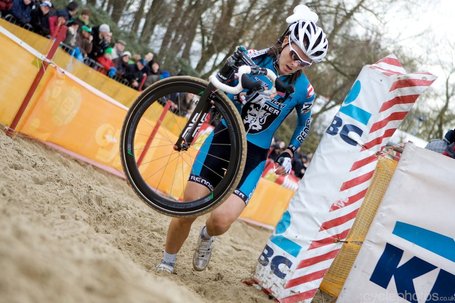 Right after the sand patch, there's a bridge. Cause really, this race wasn't hard enough yet. And then, more grassland. Again, this is the bit where you make up for lost ground.

A hill. Cause really, this race wasn't hard enough yet. The hill is on sand, but not dunesand. Cause there are different kinds. This is foresty sand, which is looser, thinner spread and more manageable. They should be able to ride up just fine, but near the end of the race when we have guys getting tired, some won't make it up.

Also, imagine this. Kevin Pauwels in first place, Klaas Vantornout in second, Zdenek Stybar in third. Final lap. The smartest thing Klaas can do? "Fail" to make it up that hill, jump off the bike forcing Stybs to do the same, and thus giving Kevin a mighty fine gap. Really, don't get stuck behind the wrong people in this race (Simunek and Mourey, I'm looking at you!*).

Right after that hill? Another hill. Cause really, this race wasn't hard enough yet. This one is even steeper, and getting up isn't so straightforward any more. Possible, definitely. But easy? Nope.

Grass. Some asphalt. A bit more grass. And then? A sandy little hill, much like the one we had under number two. It's steep though, so you'll have to get off the bike. Then, a bridge. Cause really... You know. We race down the incline, over a couple of metres of grass, and on to...

More sand! Oh yes. We're parallel to the stretch of sand we read about under number 4. Again, riding will get you lots of advantage, but it won't be easy. If you break your bike trying, you can switch at the pits, which are just behind this sandy bit.

A steep hill, with forest-sand underneath. Hard to get up unless you're strong AND in there's no one in front of you. From there, it's right on to another patch of sand. It starts out like dunesand, but it's rideable. It then turns into forest sand, which is definitely rideable. You won't make any big differences here, but it's enough to hand out a final blow or a nasty sting to an opponent.

After that there's only grassland, even a wee bit of asphalt, before we turn a corner and... reach the finish line! Voilà, you've just completed a lap of Koksijde. Lovely, eh?

*they tend to fall down often