Share All sharing options for: Cyclocross Worlds: A Preview 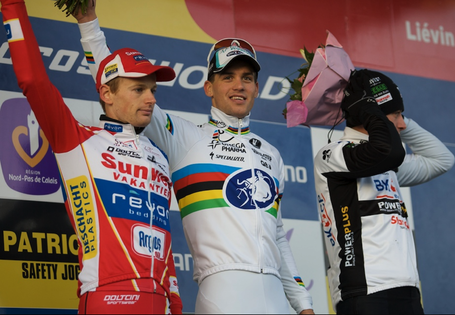 Ladies and gentlemen, welcome to the second most exciting week of the cyclocross season*, World Championships time! Yes, it is time to crown new world champions and give them lovely white skinsuits they can get muddy all next year! Get excited!

This week we have a slew of features on cross worlds on the way. Albertina has already started us off with a preview of the U-23 men's race, Chris gave us a Power Poll of the elite men, GS is giving us an overview of Koksijde - the course, the history, the SAND - later, and we will have a preview of the Elite Women's field. But, before we get ahead of ourselves, I'm going to walk through some of the basics. What to watch for, schedule, coverage, and more!

*The holy week of cross from Christmas to New Years is totally the best week on the calendar.

As you know, we return to Koksijde, a lovely amalgam of tall, sandy dunes on the Belgian coast, for this year's World Championships. The place is renown for its yearly race, the Duinencross (or Dune Cross), which has in history been the World Championships venue and a stop of the World Cup multiple times. Crazy sand, tall dunes, and tons of fans (40,000 are expected this year! And 30,000 litres of beer!) make it a great venue. But you'll learn about that soon enough. Here are the key points for the weekend.

Things to watch for:

1. Team Politics: For one day a year, several of the top cross riders in the world come together to race for each other instead of against each other, which is fertile grounds for plenty of post-race polemica. As Chris noted earlier this week, three of the top four contenders this year are Belgian. Kevin Pauwels, Neils Albert, and Sven Nys have to find a way to play together nicely for the hour and change they will be racing. Good news? Trade team alliances are not cross-cutting this year, so we aren't likely to have a repeat of the 2000 worlds. The interesting scenarios arise if a lead group of 4-6 guys emerges and Belgium has their top 3 riders in there. Who is the team leader? Albert and Nys have been World Champions before and Pauwels is on a run of hot form. So who chases, who gets to try their hand first?

The same problem emerges in the women's race with the Netherlands team. Daphny van den Brand beat out Marianne Vos in the World Cup race in Koksijde earlier this year, but Vos has been on a tear recently, winning basically everything she has started, especially the last four rounds of the World Cup. But, with those two, they'll probably dominate the race anyways, so fewer worries. For both races, this could be interesting to watch.

Other teams have it relatively easy when it comes to intra-team power struggles. For the French team, Chainel and Mourey just have to hold on as long as they can. The same is largely true for the U.S. team and others. If any country outside belgium has multiple riders in the lead group with three laps remaining, they'll be counting themselves lucky. No matter what happens, you're likely to see a lot of this: 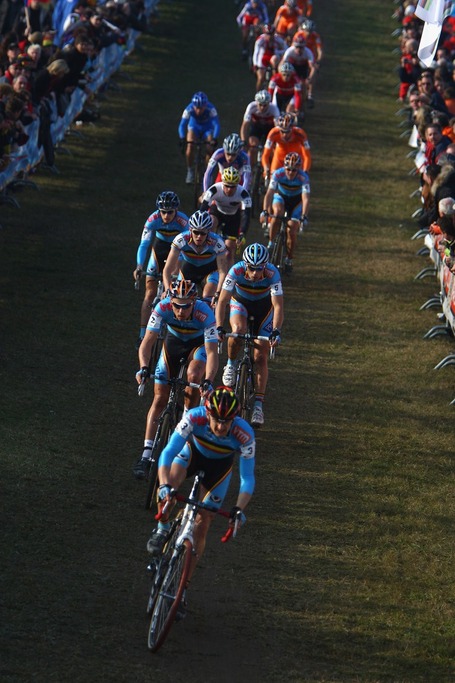 2. Crazy sand skills: One of the great things about the course in Koksijde is how it rewards technical abilities you don't see a lot in the rest of the year. If you've watched the year so far, you've seen plenty of mud (well, not enough mud. But a fair amount.), so you have seen who is a good "mudder" and who is not. With Koksijde, there are long sandy sections, riding up dunes, and crazy sandy descents. GS will give you a preview of the course later today, but keep an eye out for how skills change up the game. And look for lots of running. 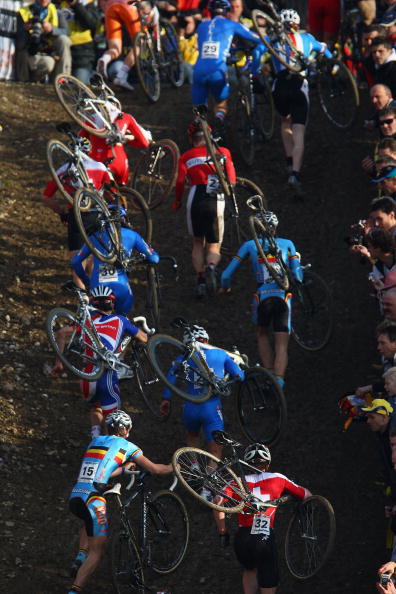 If you want to get a preview, you can watch this year's World Cup race. All of it!

Races will be broadcast on a number of different outlets. You can always count on Sporza to be broadcasting it in the mother country and links will certainly be up on Sports-Live and Cyclingfans. Also, NBC Sports holds the rights for broadcast in the United States, but it isn't clear what they are doing with the video yet. May be delayed, may be live, who knows? I can't figure it out, at least.