Inside The Peloton, by Graeme Fife

Share All sharing options for: Inside The Peloton, by Graeme Fife 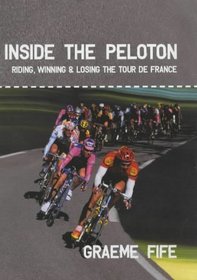 Inside The Peloton is Graeme Fife's thank you to his cycling heroes, the men whose "riding provided the first inspiration, their readiness to talk to me the continuing stimulus, their generosity the example to make [Inside The Peloton] as good a book as I possibly could." Fife's heroes here are Chris Boardman, Cyrille Guimard, Barry Hoban, Bernard Hinault, Charlie Holland, Sean Kelly, Phil Liggett, Albert Londres, Eddy Merckx, David Millar, Fréderick Moncassin, Raymond Poulidor, Brian Robinson, Paul Sherwen, Bernard Thévenet and Sean Yates. Along the way, many other riders step sideways into the story, Fife often telling the story of one man by comparing and contrasting him with someone else (so, for example, the chapter about Raymond Poulidor is also about Jacques Anquetil).

Trying to work out what the whole book is about isn't easy. It's certainly not an aimless meander through the history of cycling. Starting with Albert Londres' reports from the 1924 Tour de France - the reports that immortalised the phrase les forçats de la route - Fife moves through the decades, from Britain's first representation at the Tour (Charlie Holland's Tour in the thirties) through to the man who was, when Inside The Peloton was originally published in 2001, flying the flag for Great Britain, David Millar. With each story we glimpse elements of how cycling has changed down through the years, and the things that have remained the same. The central thread Fife himself identifies as being generosity:

"If there is a central thread in the narrative of this book, I should like it to be that one quality which marks out all the best riders, all the riders I have spoken of at length herein, which is generosity. Generosity of spirit, of mind, of effort - in everything."

That generosity doesn't always extend to the author himself. Fife really doesn't like American cyclists in general. Yes, he sings the prises of Bobby Julich, but the scorn he heaps upon both Greg LeMond and Lance Armstrong leaves a bitter taste in the mouth. He dislikes them for their very Americanness (Armstrong, Fife notes, is "the product of a very American force-feeding, from the cradle, of 'greatest, bestest, strongest, onliest' which produces remarkable performers and utter monsters."). What Fife seems to dislike most about American cyclists is their jingoism (Armstrong, again, is condemned for being the man "who unfurled the first national flag to flutter over the victory ride in Paris."). When it comes to blustering patriotism though, Fife is more than capable of holding his own. You only have to look at the Anglo-centric focus of the book to see that.

Fife has a vey particular view of cycling - as do we all - a view that is somewhat rose tinted. The romanticism of cycling is something we all enjoy, I think. But Fife sometimes seems to lose sight of reality. For instance, he thinks modern cyclists are somewhat lazy and disrespectful of the sport. This disease he identifies as having set in with the arrival of Greg LeMond in the peloton:

"There is, too, a growing tendency (a regrettable trend) amongst riders in the peloton today to quit races when they're not going well, even to enter them fully intending to abandon before the end. For instance, Jan Ullrich pulled out of the 2000 Vuelta a España, when he was wearing the leader's amarillo jersey, offering the excuse that: 'riding the Vuelta wasn't ideal preparation for his preferred target, the Olympic time-trial.' Sadly he is not alone in regarding certain races as no more than training rides. That, decidedly, is not the attitude: it demeans the sport, it betrays the professional obligation."

That, decidedly, is utter balls. Show me any rider, from any era, who didn't treat some races as training rides. It is the nature of our sport: you don't race every race, you pick and choose to suit your form. And, the fact is, some races are more important than others (the British themselves seem to believe that the Olympics is the pinnacle of all sport, including cycling). Some races you just turn up for because your sponsor has demanded your presence. Some you use to build up racing speed. The Vuelta in particular is a pretty piss poor example for Fife to use in this regard, having been, back in the days when it was a Spring race, a tune-up for the Giro d'Italia for some riders. Some races - the Critérium du Dauphiné Libéré, the Tour de Suisse, pretty much all the races before Milan-Sanremo - exist only as a tune-up for other races.

The main area I always have a problem with Fife on is his attitude to doping. How can you write a whole chapter on Bernard Thévenet without once referencing Thévenet's doping? How can you lionise a rider like Laurent Jalabert without reference to the big question mark that hung over his career? I'm not suggesting that Fife shouldn't talk about riders like Thévenet or Jalabert - there'd be very little written about this sport if we banned talk about riders who doped - but I do think it is necessary to reference the issue. Especially when you are building your portraits of riders on things like "character, courage and determination."

Fife's attitude to this issue is probably best summed up with a comment on Merck's drugs-bust at the Giro d'Italia:

"if we cannot believe without cynicism in the pure love of the bike and the passion for cycling - even today, among top riders - what future is there in the sport?"

A future, I would answer, in which we repeat the mistakes of the past, constantly fail to learn the lesson life is trying to teach us. A future in which those who record this sport continue to act in silent collusion with those who dope.

Them's the negatives, and some of them are probably personal to me and won't bother others. That's the way this game works. Another way this game also works is that you can still enjoy something while criticising it, while disagreeing with the author. Which is why I still actually like Inside The Peloton. Some of what I like about the book is in the choice of men profiled. The pieces on Poulidor, Merckx, Guimard, Kelly, Hinault and Yates make, for me, Inside The Peloton a wortwhile read.

If your'e looking for a potted history of some important names from the past - and some not necessarily so important - Inside the Peloton's well worth looking out for.