Cafe Chat: Ochowicz, BMC Go All In for the Classics

Share All sharing options for: Cafe Chat: Ochowicz, BMC Go All In for the Classics 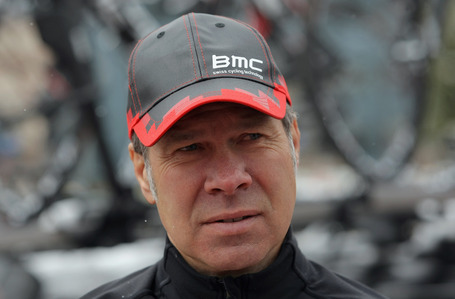 If there's a revolution going on at Team BMC, you wouldn't know it from talking to Jim Ochowicz. "I don’t really look at this year as any different.," he tells me from his team camp in Valencia, Spain, as the team boards the bus for another mild winter workout. "Every year is a challenge for every team, regardless of your roster. You have certain expectations, certain goals that you’re all trying to accomplish as a group. You know, they’re professional athletes, we’re professional managers and coaches. This year is the biggest year in our campaign thus far with BMC, so there’s a few more challenges laid in front of us than in other years, but I believe we’re ready and it’s going to be an interesting season."

Aha! So this is a big year for the team! All about the fan/media landscape we chat of a Superteam being assembled on Ochowicz's watch, a team that boasts the reigning Tour de France winner, the guy who swept the Ardennes classics, the previous three world champions, two guys with Paris-Roubaix podiums, winners left and right, the two hottest young American talents... pretty much everything a team manager could want.

But except for that minor admission, Ochowicz is keeping it real. How? Why? Join us on the flip as we break down the classics and the new squad...

Ochowicz has plenty of reason for not busting at the seams as he surveys his charges as they assemble for the day's ride somwhere along the Spanish Mediterranean coast. When you've been around the sport of cycling long enough, three decades in his case, you've seen phenomenal events, met great champions, maybe even coached some big-time winners. Like the time Lance Armstrong, the pre-cancer Lance whom Ochowicz launched at Motorola, became the second youngest World Champion ever. Like the day Andy Hampsten surmounted the Passo di Gavia and won the Giro. Or the time, just six months ago, when Cadel Evans masterfully brought home the maillot jaune. He's been on top of cycling before, so forgive him if Ochowicz looks at the Hushovds and Gilberts now under contract to Team BMC and doesn't swoon. That's our job, not his.

When I ask him about his new assemblage of talent, we don't talk of star riders bought off the rack like they do at Yankee Stadium or Real Madrid. "It starts with an intention to want to fill certain positions on the team and to reach certain objectives. So yes, we first focused on the fact that we wanted to beef up the classics roster. And then you can go in a number of different directions to do that. There’s half a dozen to a dozen really talented Classics types out there, some are available and some are not.

"So you go through due diligence, Eventually weed it down to those who are free, and interested in joining a team like ours. Then it’s a series of sit-down discussions about things like what our program’s like, what do we do , who else is on the team, what are our goals, what are their goals, does it all match up? We were fortunate to eventually end up with two very talented riders in Gilbert and Hushovd."

Compare this to Team Garmin-Cervelo, the talk of the previous transfer season, and the differences are quickly apparent. Then, Garmin found themselves in a somewhat hastily-assembled, late-season semi-merger with Cervelo Test Team, a move that made them relevant to the Classics discussion like never before (and which paid off in the end), but came with its share of question marks. Like, what do Thor Hushovd and Tyler Farrar do on the same team in Flanders?

BMC weren't built like that. "Let’s say this: we’ve gone over the scenarios already and I think we’re all pretty clear on what directions we’re going to take depending on certain circumstances," says Ochowicz. When I ask him about whether you can have so many stars, including overlapping guys like Gilbert and Greg Van Avermaet or Hincapie and Hushovd, he's unequivocal: "We’ve gone through all those scenarios from day 1 when we started negotiating with riders. We’re all pretty clear and everyone’s comfortable with that, so it’s not something that I’ve got to hammer through and/or find buy-in for, because they’ve already bought in."

That's why this really is the dream team. Picture Gilbert, Ballan and Hincapie, all of whom were in the finale of the Tour of Flanders last spring, working selflessly toward a shared plan. Add in Van Avermaet, Hushovd, maybe Taylor Phinney for support. Flip the switch to Paris-Roubaix, with Hushovd being escorted to the Velodrome by Ballan, Quinziato and HIncapie, ready to fend off any lingering rivals in a sprint. Think of the attacks you could orchestrate with a team like this. Maybe it happens and maybe it doesn't, but there is absolutely no reason not to dream. 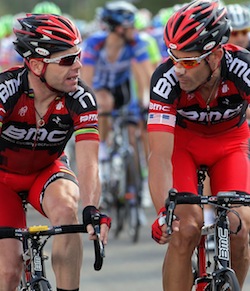 And they dream of Flanders, or Ochowicz does. "God, they’re all great races, I love them all," he offers when I ask him to pick one spring palmare he would cherish above all others. "Flanders seems to be the hardest race to win. Maybe because it’s a little more diverse and offers more opportunities than say Milan-San Remo where maybe a sprinter wins the race or Paris-Roubaix where it’s really just a hard-core cobblestone rider. Flanders is a little bit more open to a combination of those two. It even feeds into Liege and Amstel to a certain degree in that you need some climbing skills to get up those pave climbs. So I’d say Flanders. Picking one in my umpteen year career as a manager that I still haven’t found success in yet." That could definitely change.

GIlbert is the main protagonist in spring, everywhere except Paris-Roubaix. Incidentally, in light of his success in Liege-Bastogne-Liege (among others) last spring, and the numerous reasons why de Ronde has to be at or nearly at the top of Gilbert's wish list this year, I looked it up and only one rider has ever won Flanders and Liege in the same year. [Bet you can guess who.] In the modern era the two Belgian monuments bookend a four-weekend stretch of classics at the highest level -- or six weekends if you want to launch Gilbert at MSR. Can Gilbert really stay at his top level throughout that whole campaign? " I think from a physiological standpoint yes, he can be physically ready for those races, which I believe he will be, and the team will be too. It’s just a matter of getting the job done."

Running through a few more guys on the roster... on what Ballan brings in 2012:

Alessandro is a great rider, and one who has a great deal of knowledge about the races whether it’s Milan-San Remo or up and through Paris-Roubaix, which are his specialties, Flanders and Roubaix. His role will be to keep an eye on Philippe and Thor in those races, and if circumstances turn in his direction to continue on in his own opportunity, that could happen as well. He has the capability to go the whole distance, that’s not the case with every rider. He recovers well, he can ride the six-plus hours at whatever speed he has to to stay with the group or go ahead, and he knows how to manage those efforts. So, you’re talking about a guy who’s got a wealth of knowledge in those races, so he’s going to play a significant role in the team.

How does Van Avermaet fit in after having blossomed last year, the second he escaped Gilbert's shadow from the Lotto campaigns?

I think that Greg certainly has the capability to win certain races this year. He’s still developing as a rider, both physically and tactically, and it’s probably a little bit more on the tactical side that he needs to improve on to give him those opportunities. And Greg is inside of a very talented group of people, so he’s learning as he goes through this process from the people we’ve been discussing so far, so he’s got a bright future and we’re excited to have him in the team. And he’s a dangerous player – you give him too much rope and you’re not gonna bring him back. He’s strong, talented, sometimes a bit too eager but that’s part of the learning curve.

What of young Phinney?

The plan is for him to get into the Pave classics, where he’s shown color as a U23 and has a lot of ambitions in the future. So currently the plan is to get in there, he hasn’t done 'em yet, so this would be his first crack at it so he has a chance to test himself on the roads at that distance, and contribute to the team effort. So he’s got a lot more on his plate than Thor has, we know Thor can get to the finish line, and Taylor’s still got to get through the process. So he’s got a lot of challenges, and when you’re his age it’s a lot of fun, and God you can imagine how excited he is to get in there and start these races.

Yep, I can. Well, I wish I could anyway. Being excited about the Classics is the new black, a point not lost at all on the veteran manager. "We’ve targeted those races since the 80s, teams that I’ve been on. They’ve always been a top priority in my playbook. They’re races that I love and that are so unique in their characteristics that they’re difficult to even describe, you have to see them live to appreciate fully.

"I know that the American public is starting to grab on to them, for a lot of different reasons. They’re getting more exposed to them, they’re just interesting races, just one day, tactical strategies are very intense, you don’t get a second chance, it’s not a stage race, you don’t come back the next day, it’s win or lose right there on the spot. I think that American cycling fans appreciate that kind of drama of a one-day race, like a football game, you know? Packers are out, right? And that was not the prediction in Las Vegas before. So American fans understand that kind of drama and the combativity that goes on in sports that occur in a single day."

OK, so you can't have everything, and for Ochowicz that would be his hometown Packers who crashed out of the NFL playoffs in a single game. Tough one to swallow. Gotta feel for the guy. I mean, you can just picture him in his hotel room on the Spanish coast, watching his team go down in flames with nobody to help him get over it but Philippe Gilbert, Thor Hushovd, Cadel Evans, George Hincapie, Alessandro Ballan, Manuel Quin... never mind. It's karmic balance for it to rain on his sports fanhood, because at his day job, Ochowicz is looking at a lot of sunny days in the forecast.