Share All sharing options for: The Unknown Tour de France, by Les Woodland 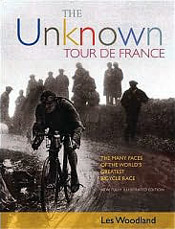 Title: The Unknown Tour de France: The Many Faces of the World's Greatest Bike Race
Author: Les Woodland
Publisher: Van der Plas Publishing / Cycle Publishing
Year: 2002 (updated 2009)
Pages: 152
Order: Cycle Publishing
What it is: A history, of sorts, of the Tour de France, stopping off at some of the usual destinations but also exploring areas most other authors have forgotten exist.
Strengths: It's a fun and enjoyable read that's well presented and looks nice.
Weaknesses: So much history, so little space.

The Unknown Tour de France opens in a cemetery in northern France. The last resting place of the man who won the first (and - briefly - the second) edition of the Tour de France. Maurice Garin. Let's boil down the story Les Woodland tells to the comments of the cemetery's two caretakers, Maurice Vernaldé and Jean-Marie Janieswicz:

- Our politicians, they have no culture. If Garin had been a soccer star or a wartime hero, we'd have a statue, or a plaque. But nobody cares about the winner of the first Tour de France.

- Not many people come. Journalists, now and then, and quite a few Dutch people for some reason. But maybe only one person a year. There were people from Italian television. 1993 it was. Ninetieth anniversary of the race, and they came and started taking pictures. I had no idea. Until then it had been just another forgotten grave. Now and again I find flowers here and I don't know who left them. And once a month or so I sweep round him. But, apart from that, he's forgotten, I think.

- You know that Garin had a filling station in the rue de Lille? I even wrote to Elf, the French oil company that sells its wares there, to ask what plans it had for a plaque, or maybe just a photograph. But there was no reply. I used to go to the garage when I was young, Of course, Garin was an old man then, a bit stooped, but he still had that enormous moustache. He never lost interest in cycling, and he loved talking about it. But I was just a boy then, and old men, they like to tell the same tale over and over again, don't they? I didn't have the patience.

In many was, that conversation sums up The Unknown Tour de France. Parts of it are the same stories being told over and over again and other parts are forgotten or ignored stories being rescued from obscurity. If you know little about the Tour, either type will amuse you, if you have the patience for these things. If you think you already know all there is to know about the big buckle, well maybe Woodland will surprise you with one of his tales rescued for obscurity. That, put simply, is why you might want to consider peeking between the covers of The Unknown Tour de France.

All of these are interesting and if you're relatively new to the sport many of the stories told will probably still seem fresh to you. Which is why The Unknown Tour is ideal fodder for people still trying to get to grips with the basic history of the Tour and don't want to get bogged down by the usual lists of names and stage finishes and average speeds and the like. It's got facts, plenty of them, but overall it's more a story-based history of the Tour (admittedly some of the facts could have done with being checked a wee bit better, but that, sadly, is true of too many cycling books).

Another point in The Unknown Tour de France's favour is the book's layout. It owns a place somewhere between the bookshelf and the coffee table. Unusually, all the images used in it - photographs, illustrations, newspaper front-pages - are reproduced in duotone, a sepia-toned black and white. All the images, the old and the modern. As a method of linking the present with the past, it's remarkably effective.

What if you've been around the block a bit, have already read too much about the Tour, does Woodland have anything to offer? Perhaps. Consider the book's final chapter, which looks at some of the logistical issues of the race, stuff like the Tour's mailroom, or assembling and disassembling the finish area structures. You'll find tales about these people on the TV, little colour pieces to fill in a few minutes after the ad break and before the sprint trains close in on the break and the real fun begins. Few writers though bother with this aspect of the race. Sprinting from one Tour to the next, they don't have the time to chat about the everyday things. Woodland makes the time.

Or take the financing of the race. Most who write about the Tour will start off telling you how it was a marketing exercise, but pretty soon they will get bored with the business side of the Tour and forget it exists. Woodland tries to do it some justice, with a chapter to itself. It's basic stuff but more than you'll find in most other Tour books. The same can be said of the way in which he looks at the way the bikes the Tour is raced on have changed down through the years.

For people who already know a bit about the Tour, these are the chapters which will make The Unknown Tour a worthwhile read. If you've already read Ned Boulting's How I Won The Yellow Jumper and found yourself engaged by the stories it tells, the glimpse it affords behind the curtain of the Tour, then maybe this is something you might want to try next.