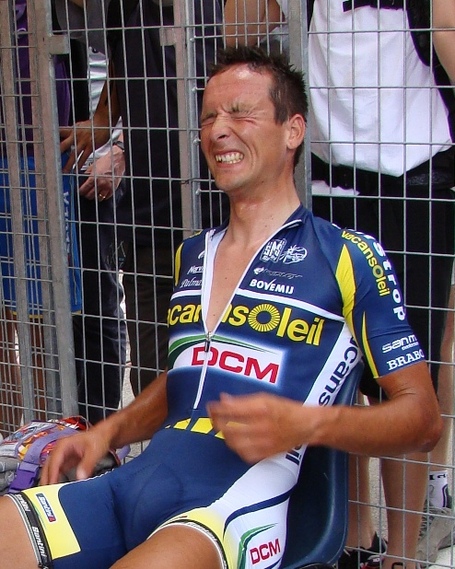 A lot of ink was spilled a year ago or more regarding the unfortunate turn of events Vacansoleil faced in 2010 as it bid to become the Netherlands' other Pro Tour Team. The springboard it selected was the presence of the world's two biggest races, the 2010 Giro d'Italia and Tour de France, launching themselves on Dutch soil, at some cost to the good people of the Netherlands. Padding their case was their presence in the 2009 Vuelta a Espana, also starting in Holland, where the team had ridden decently enough, including a stage win. But the Giro and the Tour were unimpressed, thumbing their noses at Vacansoleil, and even the Vuelta kicked them while they were down with a disinvite for their 2010 running.

This sequence of events meant that someone owed them a solid, and the UCI stepped up with a Pro Tour license for 2011, which the team put to good use. For a freshman campaign, Vacansoleil demonstrated that they had at least as good a reason to be in the Big Show as any of the teams occupying the bottom half of the Pro Tour lineup. For the Podium Cafe Rankings, they came in 8th overall, ahead of fancier outfits Saxo Bank, Liquigas, Quick Step, Lampre, BMC and Radio Shack. CQRanking had them 6th, nipping at the heels of neighboring giant Rabobank, and coming around Katusha and Gilbert's Omega Pharma. And miles beyond Geox too... meaning they were superior overall to each of the three teams who won one of the 2011 Grand Tours.

Vacansoleil weren't the subject of an Offseason Capsule last winter, but the consensus was that things weren't in great shape. The grand tour exclusions were a cruel blow, and to make matters worse, they had tried to bolster their case by signing Zeke Mosquera, fresh off his Vuelta battle which saw him second overall... at least until the lab turned up hydroxyethyl starch in his blood. So Vacansoleil, which already had foolishly offered a contract to perpetual scofflaw Ricardo Ricco and taken back Bjorn Leukemans from his six-month suspension for testosterone in 2009, was taking on the air of a dirty team -- a sure-fire way to get doors slammed in your face. At least if you're poor.

That said, even assuming Ricco wouldn't contribute anything, Leukemans was teaming with Stijn Devolder, Marco Marcato and Johnny Hoogerland for the Classics, where they were bound to cause trouble. And their sprinter lineup of Borut Bozic and Romain Feillu would presumably translate into points.

Vacansoleil were one of those teams which make a case for a points system, as opposed to looking for who got sexy wins. They missed out on pretty much all of those, unless you get excited about the Dutch Nats (which I kinda do) or stages of the Tour de Suisse (again, yeah). But if you paid closer attention, you could see plenty of quality.

Leukemans, the team's top scorer (at the VDS; second to Marcato at CQ), did finally score a trio of wins at the Tour du Limousin (stage and overall) and Overijse Druivenkoers late in the season. Prior to that, all he had done was finish 7th in Flanders, 13th in Paris-Roubaix, second in a sprint to Gilbert at Brabantse Pijl, 7th at Amstel Gold, and 9th at Liege-Bastogne-Liege. Comparitively few riders even pull off the double of starting Paris-Roubaix and Liege-Bastogne-Liege, let alone meaningfully contesting them both. But Leukemans is a hybrid of a classics rider, as he proved again by mixing it up with the climbers in Quebec and Montreal later in the year.

Marcato had his own multiple, diverse run of almost-spectacular form, highlighted by a second in a classic-like Paris-Tours (as opposed to the bunch sprint version); victory in the Tour de Vendee; third overall in the Tour of Poland with several high stage finishes, both climbing and sprinting; and some sprints in L'Etoile de Besseges, including a second where he beat Hutarovich. Romain Feillu's eight wins beefed up their points. Johnny Hoogerland nearly joined Leukemans on the podium at Brabantse Pijl.

But the really good news was the development of the young climbers. Wout Poels transformed himself from a backbencher to a 24-year-old climbing star in the making. All year long Poels kept the company of the top riders in the sport, whether it was following Contador up a stage in Murcia or taking two second places in stages of the Vuelta a Espana. Poels was getting some results in 2010 in places like the Tour de L'Ain and Tour of Britain. But when he summited the Alto de L'Angliru second only to JJ Cobo, he had officially arrived. Meanwhile, Rob Ruijgh's first taste of a grand tour was when he placed 21st at the Tour de France. He was more steady than spectacular, but that's an impressive result.

The biggest downer, apart from an epic victory someplace, was the performance of Stijn Devolder. There was a story in Sporza the other day about how Devolder is working with a coach who now blames his terrible form on erroneous training -- too much training, if anything, as the story suggests Devolder would go out too hard too early, then try to train even harder when his form didn't come around. This excuse reminds me of those job interview moments where they ask you your biggest weakness and you're supposed to say something about how "I guess it's that I care too much sometimes about my work." Then again, he got his first-ever power meter just last week, so maybe the story about him training foolishly isn't such a stretch.

Up. Literally. Poels is one of the riders to watch for 2012, as he reaches the start of his prime years and maybe makes the leap to a grand tour overall threat (he's respectable against the watch too). Ruijgh is already around, and joining them are Rafael Valls Ferri and Stefan Denifl, making for a nice U27 squad. Gustav Erik Larsson adds a veteran presence to the stage race squad, as well as some TTT muscle. And while Bozic, arguably their best sprinter, left for Astana, Kenny Van Hummel comes aboard to replace that production.

This is a pretty logical composition. The Dutch riders like Poels aren't generally graduates of the Rabo system, making them all the more attractive to build around as Vacansoleil stake their claim to the long-monopolized Dutch audience. The mix of foreign riders furthers the distinction from the more homogeneous Oranje Boys, and since that foreign presence includes top-shelf classics studs like Marcato and Leukemans, it won't (hasn't) take much for the northern fans to connect with them. Hoogie got people's attention, intentionally or not, and Vacansoleil have the quality in place to capitalize on that recognition in 2012.