Just like America and, I think, every other cross-loving nation in the world, Belgium will have its cx national championships tomorrow. Where? in Hooglede-Gits. When? At 15h CET. Can I watch it? Of course, on Sporza 2BE. Who will win? ... For that, come read below the fold.

If you need some more incentive, the words 'playmobil live action movie' come up.

Hooglede-Gits might not ring a bell for everyone, but it's the location of the (very exciting) 2007 world championships, when Erwin Vervecken managed to save Belgium's honour by narrowly beating Jonathan Page and Enrico Franzoi to the highest step on the podium. In the U23 category Lars Boom was victorious over Niels Albert, Zdenek Stybar came in fourth (Romain Villa was third). Peter Sagan was tenth in the juniors category.

Most Belgians remember Hooglede-Gits as "that race where the motor guy took out Nys and Wellens". Wanna see what I'm talking about? Cause Sporza has this particular episode of sporting history up on their site as, you guessed it right, a playmobil live action movie. If you prefer the real thing, I can offer you that too.

The course tomorrow is just like back then. Originally, the organisers had added an extra loop to give the audience a better chance of seeing the race, but, as inevitably happens in Flanders, the loop got flooded. So, back to the original it is.

That original is this: 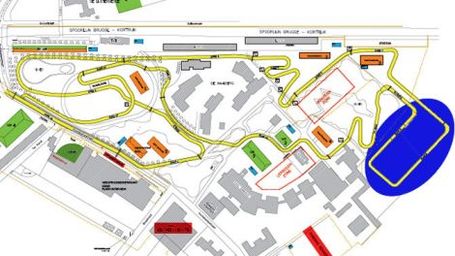 The blue bit is the loop they got rid off. As you can see in the Sporza video above, there's hills, stairs, sand and, back then, a whole lot of falling down. Sportwereld have a pretty cool interactive guide up here. I'm not sure how much sense it makes if you don't speak Dutch, but it's still fun.

Translation:
S. Start
1. First descent
2. From now on, always up and down, no more flats
3. Two stairs - muddy and slippery ones to after the weather we've had
4. Some sucking up to the organisers
5 & 6. The deleted loop
7. Taped off parcours so no one can come and try it out without permission
8. The playmobil corner of doom
9. Final staircase

As to who will win? Kevin Pauwels hasn't had the supershape he had in the beginning of the season for a while now, and neither has Bart Aernouts. Niels Albert claims he has early pneunomia (though last time he had a "bad cold" he ended up winning the race) and Tommeke Meeusen was seriously ill in X-Mas / NY-week, cancelling on not only Leuven, but the NY-race in Baal as well. Who does that leave us with? The men that got taken out by the motor guy in 2007: Bart Wellens and Sven Nys. Can you say "revenge"?