It was a sweep weekend for Jeremy Powers and Katy Compton.

Saturday was mud day. Ryan Trebon (Cannondale Cyclocrossworld) led for most of the day while Jeremy Powers (Rapha Focus) rode steadily to close the gap. Ben Berden (Raleigh Clement) rode a strong race to fill out the podium. Katy Compton dominated the women's field as she did last year, finishing ahead of the Luna Chix duo of Georgia Gould and Teal Stetson-Lee.

Sundays race was run on hard packed dry dirt it was fast and turny on a long up and down field. Powers repeated his his podium placing flashing a two finger V to indicate the sweep. Rapha teammate Chris Jones placed second ahead of Geoff Kabush (Scott). Compton and Gould returned to places on the podium joined on Sunday by Julie Krasniak (Rapha Focus).

Under the fold, photos and more photos.

Kelly Fischer-Goodwin (Boo Bicycles) gets pinned.. and seems to like it. 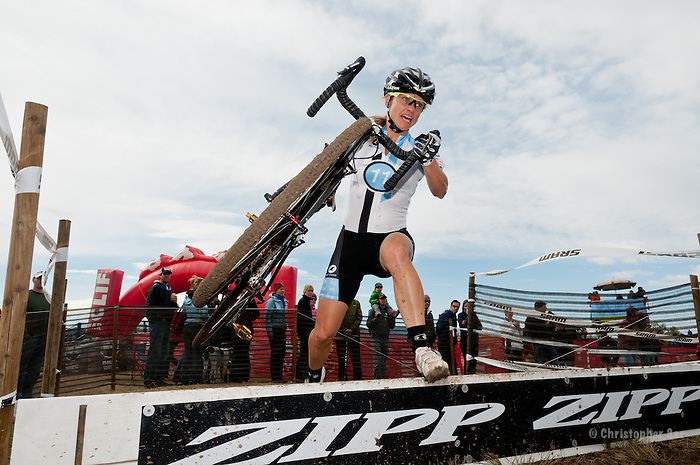 With Meredith Miller sidelined, it fell to her CalGiant Berries teammates Yannick Eckmann and Cody Kaiser to carry the colors

Jeremy Powers Signals #1 For The Weekend.

Ben Berden leads the first run up of day 2

Ryan Trebon powers a chase behind the lead of Berden, Summerhill and Eckmann. Powers is in the gap ahead.

Number 2, J-Pow for the sweep