The world's best cyclocross racers descend on Tabor, Czech Republic, this Sunday for the first round of the World Cup series. No mud, but there will be knobby-ish tires and grass.

Is it mid October already? Judging by the rain pounding the pavement outside my window and the slate grey skies I have seen for several days on end now, I suspect it might be. The road season is finally - for real, this time - coming to a close. Or so my sources tell me. I'm not so convinced there isn't another mystery UCI race in China I don't know about.

As the road season disappears, it is time for the real cyclocross season to begin. Now, this is all very confusing for me because I have raced four weekends already (and skipped another) and the North American season started over a month ago at Cross Vegas and the USGP Sun Prarie races - why have we not seen European cross racing in earnest? Why can't I watch races every Saturday and Sunday morning over breakfast while I get ready to race in the afternoon? Yes, we have finally had the opening rounds of the Superprestige and BPost Bank series, but where is the World Cup?

The answer, of course, is now. This Sunday marks the first World Cup cyclocross race, the most prestigious of the three (or four, if you're a North American) major cyclocross series.

So, we depart from the motherland and travel to the Czech Republic for two weekends of World Cup racing where the courses are fast and the UCI points deep. Yes, points - World Cup finishes play a large role in determining start position at the World Championships, so everyone will be coming looking for points.

Shall we look at what TGSGirl had to say about this course in her season preview?

... now it's time for one of Pat's races. And even though it's part of Pat's game, Tabor is disappointingly sane. There are a few hills but nothing too bonkers, some bridges, and beams as well. Nothing very noteworthy though. There can be snow and ice in the middle of October in Czechia, but it's not very likely. Stybs won one of his world champ jerseys here. In 2015, the world championships are coming back to Tabor.

And a map, perhaps? 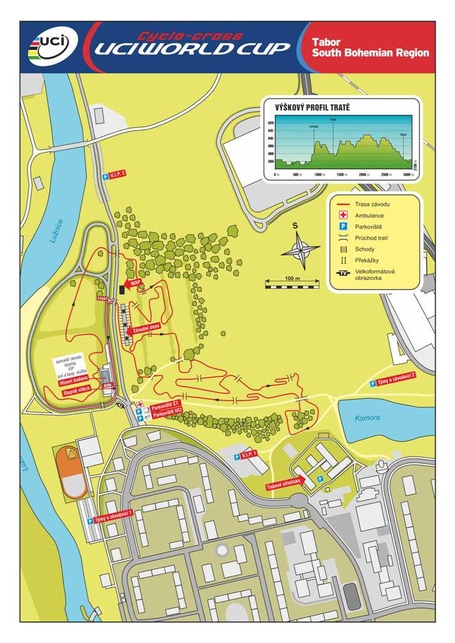 It is hard to tell from the map, but most of those elevation changes are ones which momentum will mostly take care of. Maybe a few hard pushes on the pedals in the final third. Simply put, this course is F.A.S.T. Want more proof? Watch some of the women's race from last year.

And though I am relishing in this rain, as it should forebode a muddy race for me tomorrow, I wish I could ship it overseas to the Czech Republic. The weather is far too good for a fast course like this - sunny, no rain in the past few days, and temperatures around 15-16C. Perhaps it is better to call this a criterium with stairs in the middle of it?

Last year the course conditions were similar and the master of speedy straight sections did his thing. Kevin Pauwels, the overall winner of the World Cup and winner of this round last year, must be counted on to do what he does best on power courses. He was second to Neils Albert last weekend in the BPost Bank series opener by a mere four seconds. While Nys and Albert can be expected to try to challenge him, I cannot see anyone else winning. Likewise, Katarina Nash excels on this type of course, though her season start has been slower than usual. Katie Compton, on the other hand, is a powerful rider who is thus far undefeated, though she has not raced outside of the United States yet.

But there are more interesting battles to watch than merely who wins. An interesting game to play is watching how the Americans fare. Though they rarely come overseas, Tim Johnson, Ryan Trebon, Jeremy Powers, Zach McDonald, Chris Jones, and Jamey Driscoll show up to many World Cup events in search of those elusive UCI points for Worlds. This is the kind of course that suits national champion Jeremy Powers and he could easily improve on his 10th place at last year's opening World Cup race. Look for him in the top five, maybe.

Broadcast will be on Sporza beginning at 14:45.