Share All sharing options for: Race Week: Winding Down in Classic Style

The 2012 season marks a new era, where the Giro di Lombardia no longer ends the cycling season proper. In past years Lombardia kept all the climbers and semi-climbers at attention til the middle of October. The Giro dell'Emilia was one of the season highlights, a glorious battle for positioning heading into the last lap. On a parallel and no less exciting track, the French season wound its way to Tours, where the Avenue de Grammont played host to one of cycling's greatest sprints -- sometimes. The street's fame as a cycling locale didn't guarantee a sprint finish any more than the weatherman can guarantee the weather. That's the classics.

It all came together in Milan for one last, brilliant gasp. The parallel tracks merged (sort of), though with a big advantage to the riders from the Italian buildup. Philippe Gilbert reminded us, in historic fashion, that you can win Paris-Tours and Lombardia, the rare Autumn Double, because classics favor the strong, be it going uphill or not. Maybe that just said a lot about Gilbert. Anyway, it was pretty damn fun.

Now, because late September and early October worked so well, the UCI has stepped all over the calendar, hijacked the last week for a race in China that's as important as a ping-pong match in Rome, and -- maybe not ruined, but definitely disrupted the fall classic season. Because there's nothing the UCI can't turn into gold. Morans.

Anyway, Lombardia got the earlier slot in the hopes of a better field, maybe even a nicer day, and got rewarded with a torrential downpour. Emilia comes later, hoping against hope that people will still care. Paris-Tours rolls on, albeit with less connection to Lombardia. And a bevy of riders decamp for the hunt for UCI points, scattered among the ruins of the Great Wall of China. Will things get better before they go dark? Let's run through the week's action.

What: Sprinters' fare. Seventh season for the route around Munsterland, which is not from an old TV show but is a subregion of Germany bordering the Netherlands. So yeah, flat.

Who: Well, it's over. And according to almost nobody, Marcel Kittel took the win with Kenny van Hummel relegated from second and Michael Van Staeyen (remember him?) getting the second step. Sprinters' race. I'd have thought Andre Greipel might threaten, but despite being German he is keeping his powder dry for France.

What: Pisa region, uphill finish, not terribly selective but enough to get rid of the non-climbers. It was here in 2009 when a newly minted World Champion, Cadel Evans, unselfishly launched Philippe Gilbert into the stratosphere. Gilbert won the Coppa, then Paris-Tours, Piemonte and Lombardia in the span of 11 days. Definite Lombardia warm-up race. D'oh!

Who: Giovanni Visconti considers races like this to be his personal property, winning in 2007 and routinely just missing ever since. And the good news is, since he's riding for Movistar, he can get the DS to call off several superior riders, like Nairo Quintana. Unfortunately, there's a pretty solid list of guys who won't listen, starting with Carlos Betancur, Domenico Pozzovivo, Lars Petter Nordhaug, a dozen Colombians, and the walk of shame guys: Pozzato, Rebellin, Save Ferris, Sinking Joke, etc.). Seriously though, there is usually a small bunch duking it out at the end, and Visconti can sprint a little.

What: The French Fall season continues with a purpose, unlike its trans-alpine neighbor's. This semi-ancient race, celebrating its centennial next fall, is a slightly capricious sprinters' race. Big bunches are not the rule, but medium sized ones are, and pure breakaways are an occasional interruption.

Who: Everyone who's aiming for Sunday and who wasn't in Munsterland yesterday. Also every Conti and Pro-conti team in France: Lille-Metropole, Auber 93, Pomme Marseille, Veranda Rideau-Super U, and the usual suspects (FDJ, Yurpcar, etc.). Oscar Freire's farewell tour goes through Bourges. John Degenkolb is the man to beat. Lots of B-listers like William Bonnet, Leo Duque, Fumy Beppu, one of the Haedo's, and former winner Bernie Eisel.

What: The Summit of Cycling Beauty, with its finish in San Luca raced through the famed 666 stone arches lining the approach to the Santuario della Beata Vergine. Seriously, could this place be more Italian? The final 2km, apart from being so visually distinct, is also 11% average, which is why guys like Betancur and Gesink win here.

Who: The startlist has been impacted by the UCI points system, with teams backing off somewhat from committing here from, say, four years ago when the startlist was pretty packed. Worse still is that it no longer serves up contenders for Lombardia. But hey, like they say in Aigle, as long as we can stay on the good side of our Chinese debt-holding masters, what's one less gorgeous Italian fall classic? Morans. Basically the same people as the Coppa Sab startlist, plus Nibali, Voeckler, Kessiakoff, and Lofkvist... so far. Look for more names to fill in. Keep an eye on Astana.

What: Sprinters' classic, except when it isn't. In 2010 76 riders were given the same time as winner Oscar Freire. Last year Van Avermaet won alone and three years ago Gilbert beat Boonen in a two-up match. So basically, it's a sprinters' race unless a Belgian decides otherwise. There are a couple small climbs in the last 10km, and it's 230km-plus, so this is a real classic by all definitions.

Who: Like any true classic, there are numerous possible outcomes. First choice would be another Gilbert repeat, but the Rainbow Curse is front-loading its duties nowadays... 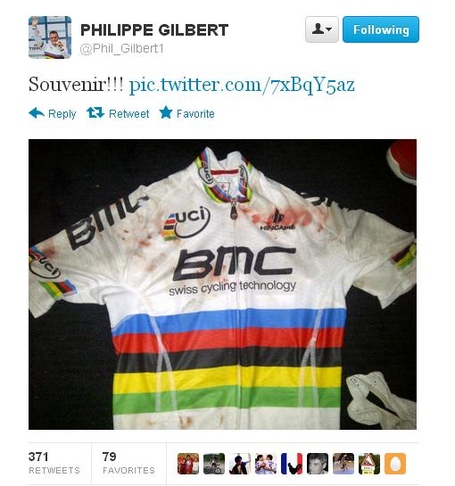 Phil sounds great but he's not on the startlist, so I take it he and his road rash are going on vacation. Or to Beijing. Either way... Van Avermaet is back, as are many other big names. But this race deserves its own preview. Look for that tomorrow.