Cyclocross is a confusing sport. It's insanity, really. But once you get past the question of why a bike race includes stairs, there is another level of detail to learn.

Share All sharing options for: Douglas and gs Take on Cyclocross: Q&A Time!

Why are you riding a road bike with old mountain bike brakes off road? Why do you have to jump over those wooden planks in the ground? Are you sure that's not just an opportunity for adults to play in the mud? These are the questions my parents asked when I first started racing cyclocross. The answers were simple - it is cyclocross, that apparent insanity you are witnessing is just how this sport is.

Then, I began following racing more seriously and paying attention to races more than simply watching a World Cup on Sunday mornings in the off season while I ate breakfast and wondering why Sven was not winning. And I began racing more seriously too, actually training for cross instead of just racing for fun on the weekends. All of a sudden I was the one with questions. So many questions! And apparently I am not alone as café members have fielded a few questions about the season, the riders, and equipment.

Questions deserve to be answered, so I paired up with our resident Belgian cross expert tgsgirl for this story. She has been watching the biggest cross races in the world from the sidelines and on TV for most of her lifetime. I am the newbie - I have been watching cross for 3-4 years and am in my second year racing, learning twenty different things every weekend (often the hard way) in my first season racing as an elite amateur in the US. Between us and the other cross racers and super fans who hang out at the Cafe, we might just have this sport figured out.

So read! And if you have questions, please ask in the comments! Same goes for answers you may have! We will be hanging around today and tomorrow, answering whatever we can.

Q: Since most of the CX races are on weekends, do any of the riders have "real" jobs during the week, or does sponsorship provide a living?

Well, that depends entirely on what level the guy is at. The stars like Sven Nys or Kevin Pauwels are professionals who are part of a larger team. Some are procontinental road squads (like Landbouwkrediet), other teams are dedicated solely to cyclocross (like Telenet-Fidea). Dial it down a level and you're dealing with guys who rely on personal sponsors, without the backing of a team behind them. Some of them make just enough to get by, but guys like Alexander Revell - the kiwi with the pornstache - is making a net loss doing this. He doesn't even have enough money for a return ticket home at the end of the season. But, the top guys are definitely pros, who train during the week and race in weekends.

Q: Kevin Pauwels rode at Tabor sans gloves, does he do that often?

I don't think Pauwels is considered especially HTFU, but most guys try to ride with 'naked' fingers for as long as possible: so no gloves or fingerless gloves, because it makes shifting and braking that much easier. Many riders also feel like having bare hands gives them better feedback and hence more control. Some riders, like Sven Nys and Niels Albert, prefer some sort of glove, even if it is just a short-fingered one. And iirc, it was a balmy 10°C or so in Tabor, which is really quite warm to a crosser; many will have bare hands down to 5-6°C. By January, temperatures will be well below freezing. Hopefully. 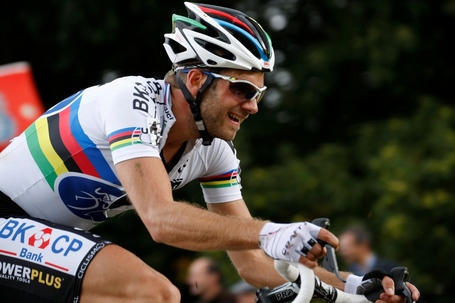 Niels Albert is among the minority of riders who prefer the feel of gloves all season long.

Q: Kevin also gets off on the "dirty" side, that's usually how I can tell which one he is, any reason, maybe left-handed?

Yep, Pauwels is a leftie - the only leftie at the top level I know of. It's a disadvantage because most corners are made with a right handed rider in mind, and him jumping off on the other side sometimes makes things a bit difficult for him. On the other hand, he also jumps off on the 'dirty' side as you call it in the pits, so his mechanic is always standing on the other side of the 'road', while all the others have to fight for space. And there are a few places where it is advantageous to dismount on the opposite side, though they are rare. For an example, watch Sven and then Kevin go through this regular off-camber turn into a run-up in Druivencross Overijse.

Q: What are the rules for the pits?

There are two pit areas per race, and a rider can enter them as often as he or she wants. A rider is not allowed to circle back if the pit behind him is closer. If you enter the pit, you have to either change bikes, or do a stop-and-go, where you jump off, take two steps (both feet to the floor people), and jump back on. Fail to do so, and you will be disqualified. Rob Peeters suffered from this in the Plzen World Cup this past Sunday - there was mis-communication between him and his mechanics and though he stopped and put a foot down, officials ruled he had not done a stop-and go and had thus illegally pitted.

Q: Powers was using disc-brakes at Tabor - were any of the Europeans using discs as well?

Jeremy Powers - as well as Tim Johnson and Kaitlin Antonneau (who placed top-ten in the Elite Women's race at Tabor) - were on disc brakes. Manufacturers have been releasing disc-brake specific frames for several years, especially in the last two, because disc brakes offer superior stopping power and better modulation while braking, particularly in the mud. Disc brakes also open up the frame for more mud clearance and thereby reduce mud buildup, reducing need to pit during races.

Disc brakes sound fantastic, so why doesn't everyone use them? The downside is a bit more weight in both brakes and frame/fork, a tradeoff that Europeans have been less inclined to make. Disc brakes appeared on the bikes of the Cannondale - Cyclocrossworld team near the end of last season under Jamey Driscoll and Tim Johnson and are now being raced by US National Champion Jeremy Powers and many of the top US cross racers. Will the Europeans change their minds? It will be interesting to see - the major bike sponsors of European riders all have high end disc specific models, so it is more a rider or brake sponsor decision.

Q: It appeared that Kevin Pauwels was also using a single chainring up front for the Tabor race, is this normal for him?

Though a single chainring eliminates mis-shifts, is lighter - for the front derailleur is replaced by a lighter chain guard - and is all that is required for faster courses without significant climbing, most riders do not switch between the traditional double and single chainring setups from week to week. In most races, Pauwels will have a double on as well, even if he does not expect to need the small ring. 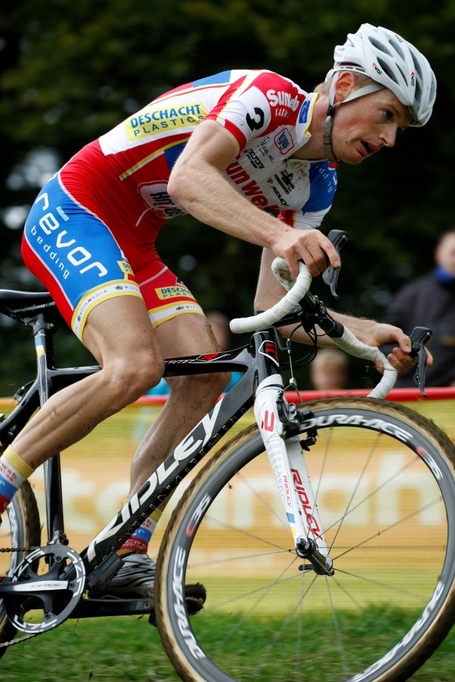 Q: How many riders, if any, use right/front & left/rear for braking?

Road bikes are traditionally routed so the left brake lever controls the front and the right controls the rear. Why switch it to the reverse? If you are dismounting on the traditional left side of the bike, your left hand controls any braking you need to do and the rear brake may offer more modulation than the front because it has less power. This is why many older professionals like Adam Myerson (a US rider) run "moto-style" brake routing. This is becoming less prevalent, though. Sven Nys, Niels Albert, Kevin Pauwels, and Bart Wellens all run traditional left/front and right/rear brake routing.

Q: What are the differences between European and American cyclocross? Courses, race day experiences, etc?

Once you start following cross racing, you may hear people talking of "European-style" or "American-style" courses. There is a difference! European courses tend to have longer power sections and quite difficult technical sections, especially in the gnarly descent area. American courses, on the other hand, tend to have more turns, particularly tighter ones, though this does not make them more technical. After all, navigating a flat 180-degree turn is easier than the descent off the Koppenberg! Or that devilish descent in the Druivencross. 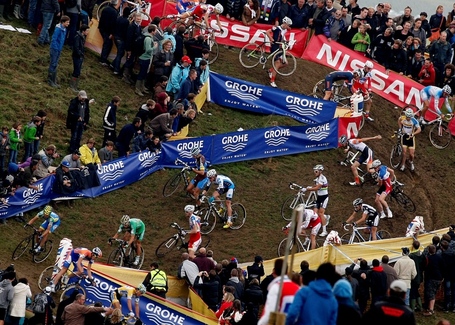 Race day experience is different too. In the US, even the biggest pro races have amateur races earlier in the day. In the pre-eminent USGP series, for example, there are five separate amateur races (often combining multiple categories of men and women) before the UCI Junior races start. And as a result, over half the fans at the races have often raced earlier. At Superprestige, bpost Bank, and World Cup races in Europe, the only events are UCI ones. Fans are just that - fans - and while some may race, many do not. But at both, there is lots of beer and questionably healthy food. Because beer and mud and snow go together like birds and a feather.

Got more questions? That's what the comments section is for!