Cobbles and mud mark what some consider the sport's premier event, and others view as the real start to the cyclocross season.

I've long theorized that the connection between Cyclocross and Belgium can be explained by the Classics. Got lousy weather and terrible tracks? Does that sound fun to you? Well, off you go then. And don't forget to lean back in the deep stuff.

To underline this point, the Cyclocross world turns Thursday to road cycling's shrine to cobbled masochism: the Koppenberg. The deliciousness of combining this so-called road with the madness of 'Cross -- particularly in lousy weather -- cannot be overstated, and the race itself is one of the season's most entertaining events. Best race in the world? Reasonable minds will differ. But among the sport's purists in Europe are many who consider the September and October races to be warmups (too pleasant still, too far from Worlds), and the Koppenberg Cross, like the Omloop, to be the real start to the season.

This race is the RVV of cyclocross: Koppenbergcross is a monument. We go up the cobbles til halfway up the hill. We take a right straight into the meadow adjacent to the cobbled road, ride uphill some more on asphalt, ziggy zaggy on down through the field and do the entire thing over again. Fun times for all. Pauwels won last year, Sven Nys the seven years before that.

The course doesn't actually climb the entire Koppenberg; looking at the top photo, it goes up a bit, then turns right into the field before the road gets walled in by embankment and trees. It then climbs up in the dirt and crosses over the cobbles in the upper section, before the madness of the Koppenberg Cross descent ensues. Here are the official aerial photos of this year's course: 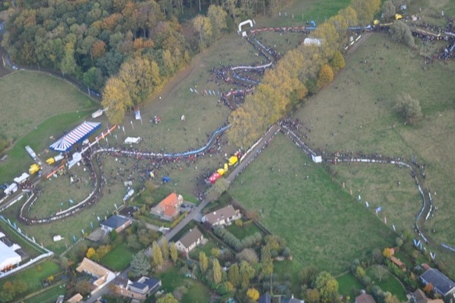 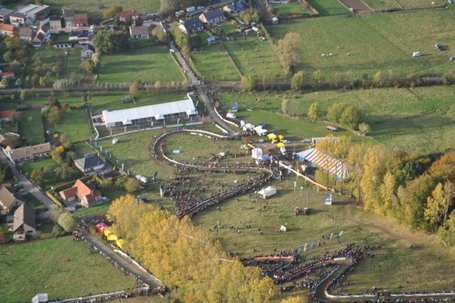 Ordinarily, the ascent -- one of the highest elevation gains in the sport -- and the twisting descent make this an unusually difficult course, both physically and technically challenging. Dump a few inches of rain on it and the pain goes up another couple notches. Weather for Greater Oudenaarde looks pleasant for a couple days, but on race day, Thursday, they're calling for rain. CX gods > weather gods. In Belgium, anyway. Here's a very entertaining update on course construction. [In Flemish; Gnome it.]

Last year, when Pauwels broke Nys' record winning streak, the weather was decent, so that's one data point. On that lovely day Pauwels also became the first rider who wasn't a past or future world champion to win there since 1999. OK, world champions win a lot, but the point is, this is an elite, selective course.

Oh, and they added a few twists to this year's track. On the uphill portion, which you can see in the first course photo on the right side, that straight traverse away from the cobbles now includes a little off-camber up-and down before the big climb. Just to warm up the legs. Secondly, I count one extra set of turns in the descent from past years. There are six quick turns from the white inflatable arch to the middle of the descent. Used to be four.

On the men's side, it's hard not to make Sven Nys the favorite, given his history and the fact that he's been on decent form, family jewels aside (ouch). Niels Albert has never won here, but he came within four seconds of Nys a couple years ago, and Klaas Vantournout was hot on their heels that day. Pauwels can't be forgotten, given his general winningness, but unless the course stays dry, I'd shift the advantage to Nys, Albert and maybe Klaas.

On the women's side, Sanne van Passen is the defending winner, but she's not on the startlist. Helen Wyman comes in as the favorite, then, coming second last year and winning the previous year, in lousier weather. Sanne Cant gets the #1 dossard and is a threat, finishing second to Wyman in 2010. Nikki Harris returns to try to match last year's podium. Amy Dombrowski heads up the American women. But no Katie Compton, and no Marianne Vos.

UPDATE!! Here's a video of this year's course. What a monster...