Forget about asphalt. Obliterate hors de categorie mountains from your thoughts and blank out seven hour race days. During the dark northern hemisphere winter months, road cycling takes a break to be replaced by its smaller, more deranged kid brother. Ladies and gentlemen: it's time for cyclocross.

Share All sharing options for: Bring on the mud: the 2012-2013 cyclocross calendar, part I

And because there really isn't much in the way of a comprehensive cyclocross calendar online, I make one. This is the first instalment, covering the months October and November.

There are links to the website, the race map and a youtube video for all the races, so you can click-click to your hearts content. All times mentioned are CET, cause that's where I am, and subject to change, cause I don't run cyclocross. I totally should though. Hoogerheide wouldn't last a day.

Cyclocross races are either part of World Cup (denoted by WC in the calendar), Superprestige (SP) or GVA trophy (GVA). To be completely correct, the GVA trophy is changing sponsors and therefore name, but the big announcement isn't til 10 October, so I'll keep calling them GVA for now. If there is (nothing) in between brackets after a race's name, that means we're dealing with a standalone cross.

All pictures are by the wicked talented Balint Hamvas (www.cyclephotos.co.uk), used with permission. More pictures (and more words by me) in Cyclocross 2011/2012 - the book.

It's a Superprestige race that gets to kick off the season for real. Neerpelt and Kalmthout were fun and all, but they didn't count for anything. Now, things get serious. Ruddervoorde presents us with lots of twistiness up one particular hill. Also, cobbles (whootz). Also, washboards. And bridges. Miscellaneous object of the cyclocross variety, pretty much. 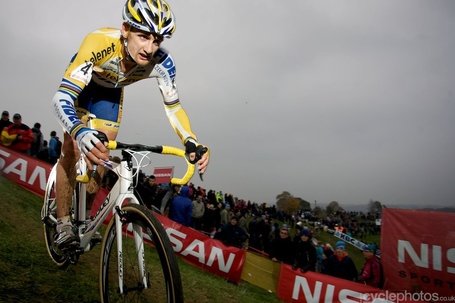 It's only the third edition, but this race has already captured the heart of many a cx fan. Or maybe it's just me, that could be the case also. It's raced on the Hotondberg (highest 'mountain' of the province of Oost-Vlaanderen, at a whopping 145 metres). The hill is its main feature, but the race uses it well. Also, when it rains Ronse is hilarious. Plus, there's this awesome ridge. The GVA-leg in Ronse also goes by the name GP Mario De Clercq, after the Sunweb DS. So Pauwels and KVT should do well here. Theoretically.

Website
Map
YouTube (if you're feeling down, fast forward to 11min and everything will be alright again)

So, we've had on of the prestigious series and one of the mystery sponsor series, now it's time for one of Pat's races. And even though it's part of Pat's game, Tabor is disappointingly sane. There are a few hills but nothing too bonkers, some bridges and beams as well. Nothing very noteworthy though. There can be snow and ice in the middle of October in Czechia, but it's not very likely. Stybs won one of his world champ jerseys here. In 2015, the world championships are coming back to Tabor.

Now that we're in the Czech Republic anyway, why don't we hang around for a while? Plzen and Tabor are pretty alike, and Tabor is probably the more interesting of the too. Let's hope it snows - snow races rock. Last year, the UCI jury made a bit of a mess of things by having people lounging about on the startline, very much hindering part of the peloton including Niels Albert, and then pretending nothing happened by not stopping the race and not calling for a restart. Please don't sue me Pat. I don't have any money.

Yes, the Koppenberg. This race is the RVV of cyclocross: Koppenbergcross is a monument. We go up the cobbles til halfway up the hill. We take a right straight into the meadow adjacent to the cobbled road, ride uphill some more on asphalt, ziggy zaggy on down through the field and do the entire thing over again. Fun times for all. Pauwels won last year, Sven Nys the seven years before that.

Website
Map (linking back to PdC live threads since 1932)
YouTube (2010's version because Svenneke did the entire last ascent of the Koppenbergcross on a flat rear tire, and still won.) 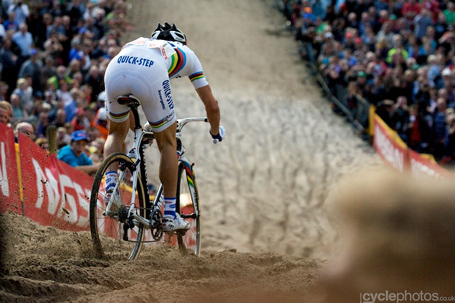 Have you recovered from the madness that is Koppenberg yet? No? That is unfortunate, because Zonhoven is even more bonkers. It's a sand race, around a giant arena created by a natural sandpit. The descents are super crazy, the ascents are so steep the riders pretty much crawl up on all fours. Ask me for my top five favourite races, and Zonhoven is in it. Easily. So is Koppenbergcross incidentally, so this is really an awesome cx week.

The jaarmarktcross (year market cross) is a standalone one but a pretty prestigious one, mostly because for the past 60 years or so, they've had the world champion take part. Most standalone races, this one included, let the U23 race alongside the elite men, which is pretty cool because it means you can play spot-the-talent. The race itself is fairly bereft of special gimmicks: there are long, straight stretches and one hill. That's pretty much it.

Website
Map (last year's tech guide. scroll down to page 7)
YouTube (full Sporza episode. In HD. Gosh, wonder what I did the past hour and a half)

Bollekescross is like San Sebastian, in that even if you don't remember the race itself you probably will recognise the podiumshots. San Seb has the pancake hat, Bollekescross has really, really big glasses of beer. Play to your strengths, I suppose. The race has gotten a bit of a redesign this year - the site mentions the bollekesberg getting a 'facelift', and then there's lots of talk about party tents and bad artists doing gigs. So, I guess we'll have to wait and see. But at least we can hope it rains as much as in 2010, when the country got flooded in the days before the race (see youtube). That was awesome.

Website
Map (haven't got one at the moment. this is better)
YouTube (look at that mud! whoa)

The Hasselt race bends and corners around the skate park and municipal pool of Hasselt, the home of jenever. It's a fairly fast race on pretty flat ground, with just about any cx obstacle added to it. Bridges? Check. Sand pit? Check. Foresty bit? Check. Tree logs? Check. Admittedly, it would be cooler if they had the riders climb the stairs of the big slide and whoosh on down, but that may be asking too much.

It's another fast race, this one, so we're best left wishing for rain. If it rains (see video, 2009) it's great as all rainy races are. Because the fastness is mostly due to there being lots of asphalted and hardened roads, but in the forest there are hills and twisty bits which are pretty fun. There's one long fast downhill too, which, again, is cooler when it rains. Nearly all cx-things are, really. 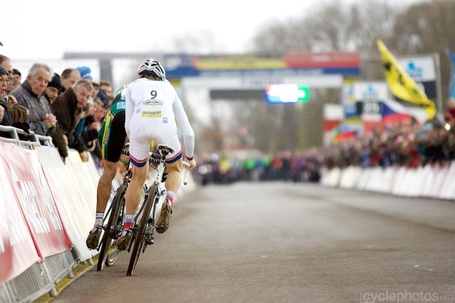 Koksijde is THE race of the season. It's like RVV and TdF and the Giro and PR and espresso all rolled into one. Koksijde is a coastal town, and the race is on the beach (well technically it's in the dunes) which is great. Have you ever tried to ride a bike in sand? I haven't, but that's mostly because I don't own a straight-jacket. In the world cup last year, there was polemica in the Nys-Pauwels sprint, with Pauwels (and Fientje) pointing fingers at Nys; and at the world champs later in the year the entire Belgian seven men strong team placed one to seven. Because we're just that good. Koksijde: awesomesauce.

The day after the glorious insanity of Koksijde, we move countries all the way up to the north of Holland. Where it can be cold at the end of November. We didn't get too much of it last year, but I really hope for lots of snow races. Especially in Gieten, which can be a bit dull if there is snow nor rain. I mean, there is one section which loops more than a rollercoaster on acid, but the rest is straight ahead through fast grassland.