Share All sharing options for: Big Lineup and TV Coverage Rev Up Emilia

The startlist has come together for tomorrow's Giro dell'Emilia, and everything is shaping up for one hell of a race.

TV coverage? Yes. RAI Sport 2 is planning live feeds from 14.20 local time (which is 2.20, which translates into something like 5.20am Pacific). Whatever, there's video, a big step up after last year's disappointment. Presumably some kind soul will turn that TV into links we can actually watch.

What's the race really all about? It's some climby goodness, with four notable humps between km 60 and 140:

But it's this last one, repeated four times, that sorts out the race:

Yep, that's the picturesque achingly beautiful porticato leading up to the Madonna di San Luca Sanctuary at the top of the climb. 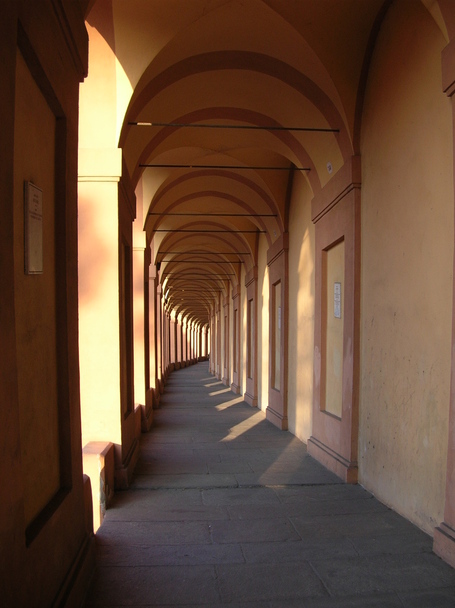 The riders don't actually ride in the arcade -- the 666 arches sheltering pilgrims making their way to the 15 chapels lining the hill, or to the Madonna itself. The race runs under an occasional arch and mostly on the road that parallels the arcade. Either way, it's a visual feast, finishing in the equally lovely piazza up above, and with an 18% max the San Luca climb separates the wheat from the chaff pretty decisively, once the battle is truly joined. Usually they pass 2-3 times in relative tranquility before it's Business Time.

The race organization put out an awesome video, complete with the Digital Santuario, because... they can, I guess:

Can't wait. I've been a little reserved after last year's non-video event but this is in my top five favorite races of the season. Yay!
Duarte photo by Fotoreporter Sirotti