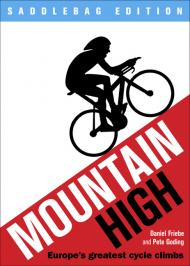 Originally published last year in over-sized hardback coffee-table format, Daniel Friebe and Pete Goding's Mountain High: Europe's Greatest Cycle Climbs has now been released in a saddlebag edition and we're offering you a chance to win a copy of it.

We interviewed Friebe about the book earlier this year and here's some of what he had to say:

"I'm very aware that the fifty [climbs in Mountain High] isn't 'definitive,' but then I hope readers understand that it isn't just about the prettiest or most difficult or most famous climbs that we see in major tours or even gran fondos. I was very keen to also talk about some of the great mountain roads, the theatres of some of the great human journeys, roads like the Grand Saint Bernard and the Gotthard. Although these perhaps aren't in the 'pantheon' of cycling climbs, there was a spirit of adventure even in the conception and construction of these roads which chimes with that daring, that defiance, that endurance which anyone who tackles a mountain pass on a bike still needs today."

To be in with a chance of winning a copy of Mountain High's saddlebag edition all we're asking you do is post a comment below or Tweet the hash-tag #WinMountainHigh. Entries close seven o'clock Thursday evening (BST) and the winner will be announced here and on Twitter (via my @fmk_roi account) later that night. Usual rules apply.

Mountain High is published in the UK by Quercus.