This weekend's USGP races in Louisville, KY, offered a first glimpse at what the World Championships course is likely to look like. Podium Cafe was on the scene, riding and racing on the course, and now offers impressions.

For the first time in history, the cyclocross World Championships are leaving Europe and crossing the Atlantic to land in Louisville, Kentucky. Much ado has been made of the move, especially concerning what the course would be like. Can the Americans, with their distinctive take on cyclocross racing, design a world championships course? What about Eva Bandman Park, which is a dedicated cyclocross venue but lacks much elevation gain and has no crazy features?

This weekend, the third stop of the USGP of Cyclocross series offered the Louisville 2013 organizers an opportunity to show off the course for the 2013 World Championships. Though small tweaks will occur, the layout of the various course features should remain the same, especially with a permanent pit with frost-proof faucets for cleaning bikes dictating to some extent course design. And I was there. I rode on the World Championships course and raced on it. Follow along for a walk-through and impressions!

Though Eva Bandman Park has been hosting cyclocross races - particularly the perennial USGP stop in Louisville - since 2010, the courses change every race. The park has an evolving set of features which race organizers can link in a myriad of ways. There is the Green Monster - the flyover with steps up one side and a ramp down the other - a long sandpit that can be split into parts, multiple run-ups with steps, borderline ride/run-ups, steep off-camber sections, berms to pump your bike over, and twisty paths through trees by the Ohio River. With these and acres upon acres of empty field to link them, a thousand courses could be devised, none of which ride the same. And, as long races have been held here, very few have been duplicates. Every year there is something new. Every person who has raced at the park wonders - how will sections be linked for the World Championships in February? How are organizers transforming typical American cross courses into one suitable to host the biggest and most prestigious race of them all?

First, let us take a look at the map. While it shows the layout of the course, it is hard to get a feel for it. But pictures are good, so we include it. 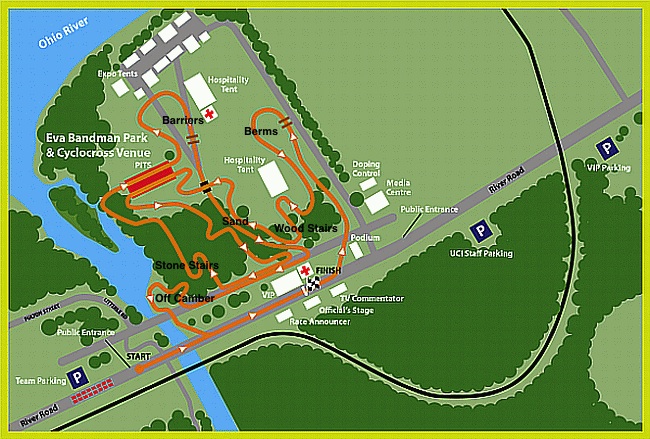 Now, what's better than looking at a non-topographic map with no pictures? A ride through the course! I was not able to snag a helmet/bar camera for the weekend, but several people posted videos from the pre-ride session Friday afternoon. A few tweaks were made between Saturday and Sunday that are likely to end up in the final Worlds course, which I will detail as we go along.

The course starts on River Rd, which offers several hundred meters of good pavement for the start chute. After a gradual turn onto grass for the holeshot riders head down a long power section. With some elevation loss at the beginning, this section is fast. If it is windy on race day, this section is quite exposed with little to block the wind, especially if it blows from the North and across the Ohio River. After a sweeping 180 degree turn, riders hit a berm on Saturday; on Sunday, the route took a more circuitous approach to the berms to bring rider speeds down and string out the pack more.

More pedaling, a downhill section, and then the first obstacle (1:15 into video) - stairs! A normally simple ride-up hill now forces riders off their bikes. Running is good, right? The approach to the stairs is what makes them tough, though - the sharp turn at the bottom of the hill makes riders scrub speed, making it much harder to carry momentum through the stairs.

As soon as you're done with the stairs, there is sand! Saturday ran racers the long way through the sand pit, though on Sunday this sand section at 1:30 was shorter and went up and over a short rise. Don't worry, there is still a long way through the sandpit later! As all good sand pits are, the sand is quite deep and it is a challenge to ride through. Nothing easy here! 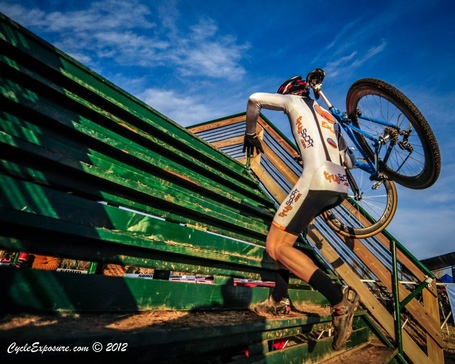 An Amateur racer makes his way up the flyover.

What better way to celebrate finishing a run-up and sand section than more stairs? That's right, in less than a minute riders will have to dismount their bikes twice. It is flyover time, and these steps are some of the steepest I have encountered - I almost had to shoulder my bike to hold it up tall enough, and I am 6'0" tall! A quick drop down the other side, some turns, a run by the pits, and you're off to the woods for some twisty goodness, including an off-camber section that shouldn't be too tricky. Rain could play havoc here, though. Side note? The bermed turn 3:00 in is wicked fun, y'all. This section has just enough pedaling to put pressure on other riders, especially since you can carry ridiculous speed through the bermed turn. 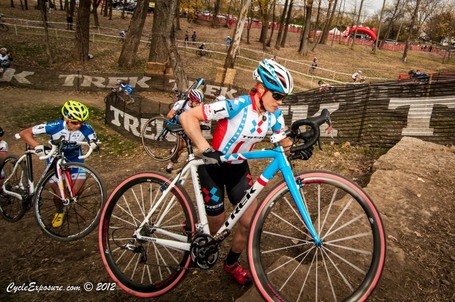 At 3:35 into the video we hit the next memorable feature - the limestone stairs! More running! The descent immediately beforehand is rough and quite steep - rear wheels will be bouncing and sliding all over the place here. Mine certainly was, especially while racing. The stairs offer a fun challenge because they are rideable, as Adam Craig demonstrates below (Jeremy Powers and Cody Kaiser did as well, but nobody else). It is not necessarily faster to ride them, but way cooler. Plus it's a fast remount before another rough and steep descent, so staying on the bike is nice if you can pull it off.

Pedal, turn, pedal, turn, pedal, barriers... The next few minutes go by quickly. The singletrack like sections in the woods are fun and swoopy, no brakes required. POWAH required. Under the flyover and then, at 5:25 we approach the sand pit for the second time. 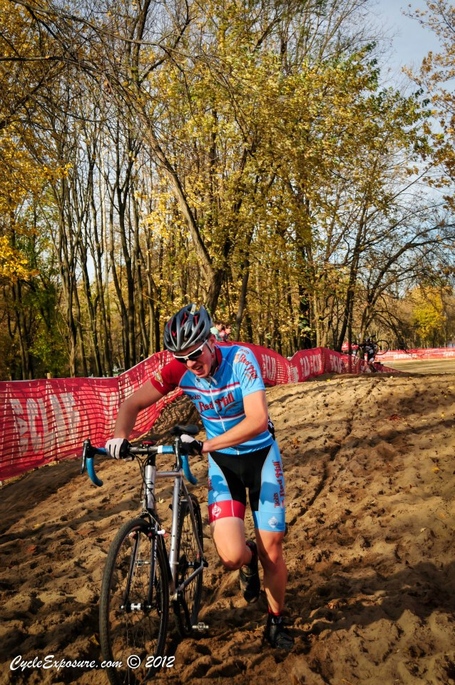 The Sand Pit, it is long.

Saturday had a short jaunt here... Sunday brought back the LONG sand pit, which gains elevation overall. It's a tough one to get through, guys. And after a power section it really, and I mean really, saps the legs! And no respite as you head into a longer paved section....

Less than a minute to go to finish the lap as you encounter the last of the trickery on the course. First up is a tough off-camber turn that is quite tricky while dry... I can't imagine it when it is wet. This is probably one to run in the rain, even if you're Albert or Nys. But if you run it, where do you re-mount? The end of the off-camber section is a six inch drop off followed by a short descent and off-camber turn back up the hill. Up and down and up and down and up and down the same dang hill! If it's really sloppy, expect them to run the descent and back up the next hill. It will be madness if it is really sloppy, mark my words. 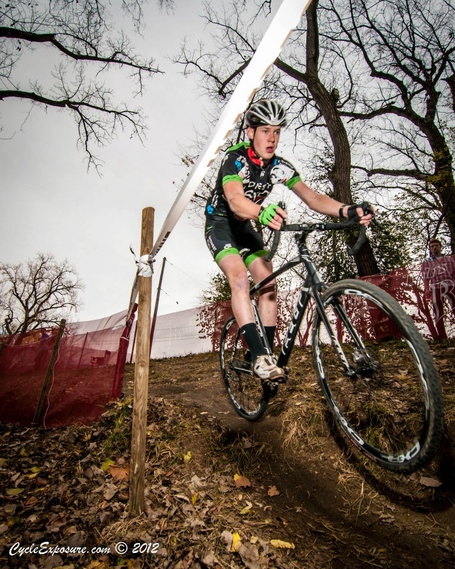 A junior racer drops off the final tough off-camber section.

This is where the last lap position battles could get really interesting as riders go up and down and back up on two steep rises. Totally rideable, as momentum gets you halfway to the top of the second rise. The surface should not get too slippery in the rain as it drains well and is not clay. Then a little grass and back on the finishing straight!

For reference, the rider in the video took approximately 7:15 to do one lap and appeared holding back on the running sections as well as getting caught behind traffic in a few spots. On Saturday, Katie Compton was turning 6:30-6:40 laps on Saturday and second placed Katarina Nash, a former World Cup winner, was in the range of 6:40-6:50. Expect the pro women to be racing a little faster than the video, but not ridiculously so. The fastest lap in the elite men's race was 5:44 when Jeremy Powers jumped away from Ryan Trebon with just over one lap remaining. Throw mud into the mix and who knows?

What makes a good cyclocross course? I think it is one that balances power and technical skills, short bursts of speed and longer drawn out sections. A course should make sure there is a fight between the riders, a battle to get to sections first, a back and forth. The Koksijde World Cup men's race last year gave us such a fight with Sven Nys almost but not quite able to distance the less skilled but faster Kevin Pauwels. The race required technical finesse and that is what made it exciting.

Adam Myerson remarked on twitter after Saturday's race that the course was the most technical dry race he has ever seen in America. He could very well be correct, and I would love to see what happens in the rain. Or snow, because ice on this course would be some crazy stuff. But the key is how the technical sections are balanced by power. The finishing straight and the long straightaways that follow it flip the tables on riders who get a gap in the middle half of a lap. The long section after the barriers followed by the sand pit gives riders a chance to maneuver and attack before the final tricky sections.

Unlike Koppenbergcross, Zonhoven, or Koksijde, there is not one defining feature to this course, one crazy technical section or climb that seems to define the race year after year. But, as Helen Wyman remarked to my party after Sunday's race, it is a course that keeps you on your toes the whole race. As a racer who was on the course earlier in the day, I agree. There is little room for recovery on the course too, especially with all the sections where running is necessary. In my opinion, the course as routed on Sunday with the long, uphill sandpit coming after the barriers rather than earlier, is harder, and most pros preferred the overnight tweaks.

The course is distinctly American with much more turning than most European courses and should suit a more punchy rider like Jeremy Powers and Lars van der Haar. At the same time, as many riders remarked, its longer power sections are more European than a stereotypical American course. Balance, bringing a bit from each way of styling courses, seems to be the goal. It may not be as hard as Koksijde, or as memorable as Druivencross Overijse, but it is definitely a World Championship quality course. I know it's the hardest course I have raced on in the region by one or two orders of magnitude.

All photos courtesy of Christopher Jones at CycleExposure.com