Behind the Stare author Geoff Proctor stops by the Cafe to reflect on his CX and Louisville.

Last week we brought you the inside job on top-level Euro Cyclocross, courtesy of Behind the Stare, author and CX coach Geoff Proctor's up-close account of the Sven Nys's of the world. I gave the book a strong recommend based on what Proctor had to say about the period covered by the book, the 2007-08 season. Over the weekend, Proctor and I caught up to talk about the next big, big thing... Louisville 2013.

As coach of the US National U23 and Junior cyclocross programs, Proctor probably has more of a stake in what happens in February than he ever did in the subjects of his book. Yes, it's undeniably exciting to any American rider or coach to host the UCI World Championships. Yes, Proctor knows all the top riders very well, and will be excited like the rest of us to see Jonathan Page and Jeremy Powers chase a medal. But, as big as all that is, it's surely just as big an opportunity for the juniors and Under-23 riders, several of whom Proctor coaches. These are heady times for US Cyclocross... an ideal time to check in with Proctor.

PdC: From the way you interact with so many different riders, including rival stars of the sport, it seems like the Cross scene in Belgium is rather tiny. Is this so? Does everyone know everyone? If so, it must get interesting when the competition gets super hot. As professional sports go, top-level cyclocross is a pretty small scene.

Geoff Proctor: Everyone does pretty much know everyone. The sport, by nature, is adverse and that tends to build community. Rival teams often help each other out. One thing that has always impressed me about the top riders is their class and sportsmanship. Look at Niels Albert and Sven Nys the past few weeks. They’re out there killing each other in races like Koppenberg, Zonhoven, Hasselt, Asper, yet after the race, they’re impressively gracious.

You see the same with our top US riders. Another sense of the small-scene feel comes with support staff. Many riders are assisted on race day by family members. During the season of my book, 2007-2008, I remember working the pit with the fathers of Boom, Vervecken, Wellens, Simunek. Currently, two of the top women--Wyman and Compton--have their husbands working for them. Recently, in Tabor, I visited with Sven Nys’s soigneur and Sven’s dad. They had just taken turns driving the motorhome all night from Belgium. And they planned to drive back to Belgium after the race, then down and back again to Pilzen the next weekend. That’s the behind-the-scenes glamour to the sport. [wink.]

PdC: How is the talent in top-level Euro Cross this year? Seems like when you started writing the book the competition was at a really high level, but now Stybar and Boom have left, Nys is getting along in years (in theory at least), Wellens is second tier and with Pauwels lagging at the moment it's a two-man event. Is this just a brief lull in the action? 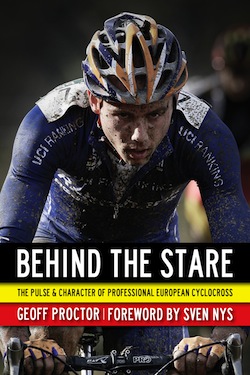 GP: I’m not sure. The press currently refers to "the big three" as Nys-Albert-Pauwels. Five years ago, again during the season of my book, the pool was maybe a little deeper with Boom and Stybar. Certainly, it was more international with a Czech and a Dutchman in the mix. But, today, Sven is as good as ever, and guys like Van der Haar and Jeremy Powers are coming up. And, if junior Mathieu Van der Poel (Dutch son of Adri) continues in cyclocross, he will be the next superstar.

It’s important that the sport globalizes though. Look at our women’s top right now: Dutch, American, Belgian, French, German. An international field will always bring more dimension. As far as Pauwels, well, he’ll find his legs and look at Wellens today in Asper-Gavare. Third place in one of the hardest circuits in the sport. Chapeau.

PdC: It seems like it's hard to overstate the significance of the Worlds coming to Louisville. What's the feeling among the top American guys that you're in contact with, is this the moment of a lifetime to them or something less... oh, defining?

GP: It’s very important for a rider to keep everything even keel. Race-by-race, one day at a time. Because on the day, it’s still about making the little gains and being in the right mindset, no matter what the race. Certainly there’s the advantage of having an affinity with one’s surroundings and being comfortable in one’s culture. Having spent a lot of time helping riders in Europe, I think it’s going to be tangible for us to have that in Louisville. But, when it gets right down to it, it’s all about focus and executing our plan.

I think it’s a bigger deal for those around the race--the teams, the support staff, the cyclocross community, the industry. The organizers, the Louisville Sports Commission, USAC all have done an impressive job. I’m super proud to be a part of it because, as I write in the Epilogue of my book, it will be a special moment in the history of cyclocross. We don’t yet get to have our discipline in the Olympics, so the world championships are our "Games".

PdC: Do you like the chances of Powers or Page, or any other Americans against the Belgians and co? Maybe a podium spot? Surely the familiarity with the course and the lack of international travel (for once) has to help the American riders a bit?

GP: I like our chances in all categories--juniors, U23, women, and men. And not just from our #1 riders, but from our full complement of riders. I expect some inspired performances from team USA. With the home-country support, probably the most vociferous of any in the world, I expect we’ll see some special rides.

PdC: Of course there are U23 and Junior races as well. Can you tell us about some of the riders you've been coaching through the national team that we should keep an eye on?

GP: So far, we have three young riders who have automatically qualified for worlds through strong world cup results. Juniors Logan Owen and Curtis White and U23 Zach McDonald. So we’re on our game plan with a couple of months to go.

PdC: As Cross develops more in the US, do you think it becomes less urgent for riders to try to move to Belgium in order to bring themselves to the highest level, or is it still necessary to go to Europe for at least part or all of the season if you want to develop to the top level?

GP: I have great respect for the full immersion route that Jonathan Page has taken. Amy Dombroski is doing the same with Fidea now. Each rider has to choose what is best for him/her. For the younger riders with school and family responsibilities, I think it’s important to do strategic blocks. And for some elite riders too.

Three things become clear when you’re in Europe: first, a rider needs proper support. In other words, the set-up around the race needs to be spot on so the rider can concentrate 100% on the racing. Second, a rider’s development is much more expedient. The courses are technical and challenging, the conditions are varied, and the level is high. As I write in my book, a rider really learns how to ride a bike in European cyclocross races. Third, the highest level is still in Europe, so as long as this is the case, a rider needs to spend at least part of his/her time racing there to reach the top.

PdC: How was the experience of writing a book for you? It sounds like you wear a lot of other hats, between the day job, coaching, family, etc. How did you manage to stay motivated and push through the long process of writing/editing your book?

GP: Motivation has never been an issue for me. Cyclocross is a sport for the passionate. I try to convey that in my book. My challenge is time. Spending time with my family is my highest priority. Then my teaching job takes an inordinate amount of time. On my recent flight back from Czech Republic, I spent 8 hours and 45 minutes reading and commenting on student essays. This is a pretty regular weekend responsibility. So, balance is everything for me. The fact that it took five years for me to write, edit and publish my book speaks for itself. I never had the blocks of time that one needs to really focus. With Louisville 2013, it will be 10 years+ of coaching/directing in cyclocross. It will be a good time to assess my roles as a teacher, coach, and writer and see what opportunities are out there in each.